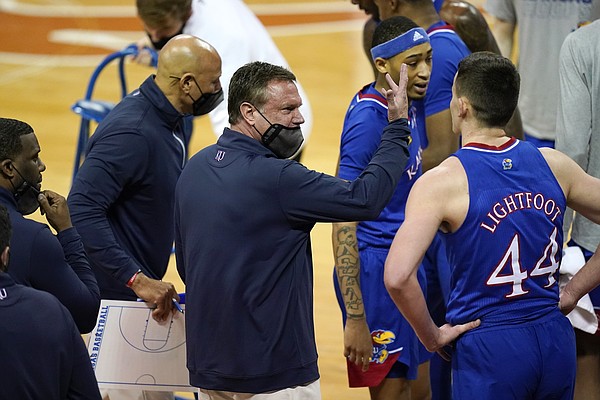 Kansas head coach Bill Self, center, talks to his team during a timeout in the first half of an NCAA college basketball game against Texas, Tuesday, Feb. 23, 2021, in Austin, Texas. (AP Photo/Eric Gay)

At a program with the college basketball pedigree of Kansas, one of the time honored traditions of Selection Sunday for coaches, players, fans and media alike is inspecting the rest of whatever region the Jayhawks ended up in and gauging just how difficult their road to the Final Four will be.

That flies most years, particularly when KU is a top seed with a legitimate chance of making a run at the national championship. But right now, mere days removed from withdrawing from the Big 12 tournament, KU has far too much else to worry about to dive headfirst into that exercise.

Forget about Gonzaga, Iowa, Virginia and the rest of the teams in the West region. The Jayhawks don’t even know with absolute certainty at this point how their shorthanded rotation will play in their NCAA Tournament debut Saturday against Eastern Washington.

Head coach Bill Self never has entered The Big Dance with KU facing so many moving pieces and question marks. Self and the Jayhawks expect (read: are hopeful) that starting big man David McCormack and reserve wing Tristan Enaruna will be able to clear COVID-19 protocols and practice with the rest of the team in Indianapolis later this week.

Enaruna had basically fallen out of KU’s rotation late in the season. He didn’t play at all in the regular season finale versus UTEP and last played more than two minutes in a game at Kansas State on Feb. 17.

However, the Jayhawks actually need Enaruna again. The identity of the KU player who tested positive for COVID, leading to the team’s abrupt exit from the conference tournament, is being kept private. But let’s just assume it is a rotation player who won’t be available for at least the tournament’s opening weekend due to COVID. It’s a safe assumption, because Self said Sunday evening Tyon Grant-Foster, who hasn’t played a minute in a game since Feb. 17, will get an opportunity to make an impact. Enaruna is a more trusted contributor than Grant-Foster. How will Enaruna, a 6-foot-8 sophomore, handle being thrust back into a key role?

Then there’s the matter of who will be missing when KU takes the floor on Saturday. Veterans Marcus Garrett and Ochai Agbaji spoke with the media Sunday after the brackets came out. They’re not in quarantine. Neither are Mitch Lightfoot, Christian Braun, Bryce Thompson or Dajuan Harris, all of whom could be spotted in social media posts from KU’s official account, following the selection show.

So what if the Jayhawks have to play without Jalen Wilson, their best rebounder and ideal small-ball five? It’s possible KU will have to try to get to the second round and the Sweet 16 without him.

How the Jayhawks will handle all of this shuffling amid the pressure of playing in the NCAA Tournament remains to be seen. There are a lot of unknowns to navigate in a typical March, in pre-COVID times. What KU has on its plate is something else entirely.

It would be a blast to see the Jayhawks take on Luka Garza and Iowa in the Sweet 16. And a rematch with Gonzaga in the Elite Eight would be fascinating. But if ever there was a time to pump the brakes on such thought exercises when it comes to KU’s run it is now.

Nothing is promised during March, even when a team heads to “The Madness” with its roster completely intact.

Self’s been at this too long to ever get caught looking ahead. He said Sunday night he used to fill out a bracket, but probably hasn’t bothered in about 15 years.

He’ll have the prefect approach for this challenging week ahead.

“I care about one bracket. And to be honest I care about Eastern Washington, Drake, Wichita State and USC,” Self said, naming KU’s first round opponent and the three possible teams the Jayhawks could face if they advance.

Don’t get caught looking ahead in this loaded West region. The Jayhawks have too much going on right in front of them for that.

I know the team can't look ahead, but we certainly can. Oh how I want revenge on WSU in the Round of 32!

As for Misuse, I'm torn. I would love the idea of OU destroying them in the first game. OTOH, if we could beat them in triple OT to deny them their first trip to the Final Four, that would be even more sweet.

Of course if we could miraculously get revenge on the Zags, that would be pretty darn nice too.

there's no way that Missoura makes it to the elite 8.

I think you mean Mizzery

If there was ever a year with no gimmes, and real legitimate concern it's this one. I really want to see them make it to the Sweet 16, if even for no other selfish reason that I want to see them keep playing because I literally live for KU in the tourney...probably more than I do for the next Marvel Cinematic Universe movie (that's saying a LOT). And I'll bet EWU knows we may be vulnerable and will come at us super-hard. We need Och & CB to go ape$4I+ beyond the arc.

At this late date and after the UTEP game, anything is possible. Evidently, EWU is on a roll and playing lights out. And if Wilson is the one out, we're even more challenged. Our defense is our prime survival means.

Wilson did not travel with the team today. Thus he's the one who is out. That will hurt.

Time for the others to step up and Braun to find his shot again. He does all the right things so he’ll keep playing, but it seems that he’s been in an O funk for quite some time.