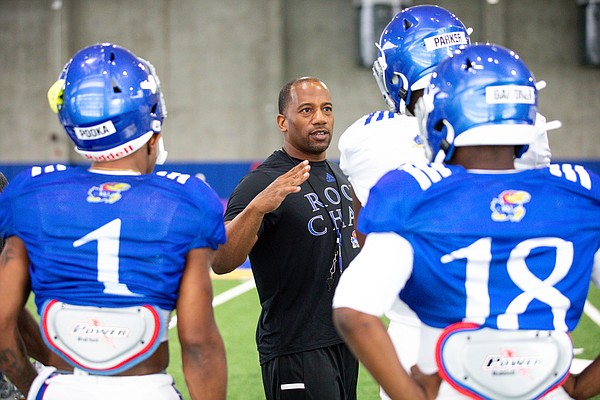 With the future of the Kansas football program in limbo, some Jayhawks on Wednesday night began publicly drumming up support for Emmett Jones to become the team’s next head coach.

Having those two mammoth vacancies coincide made what will come next for the head coaching position all the more unpredictable, perhaps prompting players to voice their preference for Jones.

One of Jones’ position players, sixth-year senior Kwamie Lassiter II, also made his thoughts on the matter clear, posting, “Put Jones in that spot and (let’s) get to it!” Lassiter’s tweet was soon after retweeted by running back Velton Gardner, receiver Takulve “T.K.” Williams, defensive end Marcus Harris and other Jayhawks.

More calls for Jones, who also serves as KU's passing game coordinator, to take over would follow, too. Receiver Lawrence Arnold wrote, “As a player at KU we need a coach in office right now that (knows) the players and (has) a relationship with the players.” Jones followed that opinion with a hashtag in support of Jones.

De’Kedrick Sterns, a freshman offensive tackle who just enrolled at KU this semester, shared a similar tweet to Arnold’s.

Yet another receiver, Luke Grimm, posted a game photo of him and Jones, with the caption, “Y’all know what to do.”

On Tuesday, before he left KU, Long stated he planned on naming an interim head coach within the next couple of days. While the specifics of the new plan and timetable for naming an interim haven’t yet been made public, it’s likely KU Chancellor Douglas Girod and Kurt Watson, a KU alumnus and prominent donor whom Girod named interim A.D., will decide with current KU assistant will be the interim head coach.

It might be as soon as a few weeks, per Girod, that KU has a new athletic director in place. But it won’t be until then that the next steps for finding the permanent KU football coach will be solidified.

Put Jones in that spot and LETS GET TO IT!

As a player at KU we need a coach in office right now that know the players and have a relationship with the players! #CoachEmmitJones

None by Lawrence Arnold Jr

It's time for #CoachEmmitJones to take charge. I approve this endorsement wholeheartedly!!!!!!

Sorry, but hold on. Love the man, but is he really ready. Ku football is not gonna rise on good vibes alone.

No...we just did a receivers coach with no coordinator experience and it ended badly (and technically started badly). Our passing game was not good last year and this would be horrible...not a good idea at all.

Somebody, somewhere is qualified. Jones isn’t.

Whats wrong with making him a interim Head Coach for the season and see what he is able to do. You have nothing to lose, I'm sure most coaches aren't leaving their post at the start of spring football.