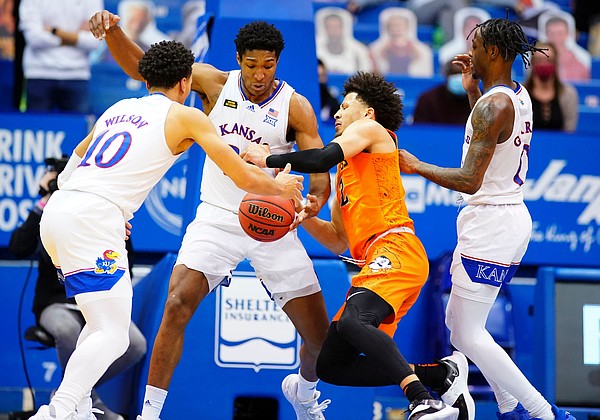 Oklahoma State guard Cade Cunningham (2) loses his grip on the ball while defended by Kansas forward David McCormack (33), Kansas forward Jalen Wilson (10) and Kansas guard Marcus Garrett (0) during the second half on Monday, Feb. 8, 2021 at Allen Fieldhouse. by Nick Krug

Twenty games into a strange, at times hard to watch, Kansas basketball season, a Big Monday victory over Oklahoma State shined a spotlight on David McCormack, as well as the entire KU team’s trajectory. As the regular season winds down and February soon turns into March, these Jayhawks will only go as far as McCormack’s broad shoulders can take them.

That much was evident in a 78-66 Kansas win, even when McCormack’s offense was dead in the water in the first half, ahead of his second half vindication and a 23-point, 10-rebound double-double.

As KU once again toiled on offense — a recurring theme since the start of January in particular — throughout the opening 20 minutes, it became easy to wonder if the Jayhawks were about to drop another game to a quality opponent. What was it going to take for them to get their heads above water and show some promise before the postseason gets here?

The answer had to be at least a little disconcerting for KU fans who have grown wary of the team’s volatility. But the big man who has himself been chastised for his own inconsistencies throughout his junior season truly is the one player on the roster who could play well enough in the weeks to come to be the driving force behind the Jayhawks (13-7 overall, 7-5 Big 12) turning their season around.

Squint hard enough and you can see McCormack playing to his size and strength on a neutral court somewhere in Indiana next month, and the Jayhawks complementing his interior play with balanced contributions across the perimeter.

That’s how it all came together in the second half for KU versus the Cowboys, and that’s part of the blueprint for the Jayhawks from here on out. (Offensively, they also will need better 3-point shooting than the 5-for-15 they put up against OSU.)

There is no other player on the KU roster capable of putting the team on his back. Ochai Agbaji is the Jayhawks’ most effective scorer, with his now pure 3-point stroke and the ability to use his athleticism to finish above the rim both in transition and in set plays out of timeouts. But Agbaji is more of a steady contributor than someone to expect to suddenly become a 20 points per game scorer. Jalen Wilson is still a redshirt freshman, and probably at least a year away from producing at a consistent enough level to be a focal point of the game plan night in and night out.

The 6-foot-10, 250-pound McCormack isn’t without his flaws. But when he runs into issues, he often only has himself to blame. The offensive mistakes he makes — whether that’s playing too sped up, not gathering himself for a strong take inside or settling for a long 2-point jumper — are easy to fix.

And while McCormack obviously doesn’t fit the mold of vintage one-Jayhawk wrecking machines such as Danny Manning or Thomas Robinson, with his scoring, passing and defense in the second half against OSU, McCormack actually made KU entertaining to watch again, as he produced 21 of the Jayhawks’ 50 second-half points.

Forget must-win. This was a “non-negotiable game,” as McCormack put it during his postgame video interview from Allen Fieldhouse. Despite an awful individual start for the big man, as he stockpiled misses around the rim, the veteran didn’t let that weigh him down.

“That’s what I was telling him. I told him every time we passed it to him in the second half to go up,” Garrett said of McCormack, who went 6-for-9 from the filed and 9-for-12 at the foul line while playing 17 minutes in the second half. “I feel like when we have him as a presence down there it’s kind of hard for them to guard us, and it makes it a lot easier on the guards.”

KU shot 52% from the floor, 3-for-7 on 3-pointers and 21-for-26 on free throws with McCormack playing the role of go-to big and willing passer (three assists).

His head coach, Bill Self, would’ve called McCormack the best player on the court in the second half if projected top-three NBA draft pick Cade Cunningham hadn’t been on the floor, too.

McCormack is such a good teammate, and cares so much about the guys around him, maybe it just took him some time to feel comfortable being ultra-aggressive.

Team-first players make an impact on defense, too. And McCormack did that against OSU by playing to the scouting report, helping off of non-shooting threats and pressuring Cunningham on ball screens outside when that was the call.

“Just helping on all drives and being a paint presence,” McCormack said of what he wanted to do on that end of the court, on a night that he also swatted away a couple of OSU shot attempts.

Remember three years ago how puzzling of an up and down regular season Malik Newman had for KU? Then Newman proceeded to kill it once the postseason began, finally playing up to his potential when the Jayhawks needed him most.

McCormack won’t have the benefit of playing with talented shooters like Devonte’ Graham and Svi Mykhailiuk the way Newman did, but he’s just as capable of erasing a season-long narrative around him by turning it up when the outcomes matter even more.

The Jayhawks need someone to lead them on a March redemption tour. For the first time this season, McCormack finally looks like a big man capable of making that happen.

Kansas head coach Bill Self following 78-66 win over No. 23 Oklahoma State by KUsports.com

KU's David McCormack on key to playing well in second half against OSU by KUsports.com

Kansas senior Marcus Garrett on importance of home win against Cowboys by KUsports.com

Most improved player on the floor from our team, indeed. It's nice to see a bunch of big moves like he's supposed to do earlier. Scary thing is, he is not done yet. He still uses glass instead of forcing through his power slamming those bunnies. Would someone show Dave how Sidney Curry hates rims? He still does that turn around fade away jumper or hook - low percentage, but like Smith said, they can be fixed. I like how he shows others how to use bball IQ/instinct through passes, too. Yeah, Marc needs to learn how to do passes like that.

Scarier thing is once other players know how to throw lobs (sadly, till now nobody in our team really knows how except Harris) or when to pass interior passing - watch out !!

Yes, the lack of lobs is concerning. So is the lack of ability to push his man up the lane and seal him. Just improving those two staple of our offense would help a lot.

Well, keep improving. Just about everyone will return next season.

I am looking forward to a time when David will dunk more than he will bank shots off the glass, giving opponents time to do more blocking and it adds more of a chance the ball will bounce off. Dunking is a far higher percentage shot. It also charges up the team far more, while demoralizing the opponents, especially if the ball is dunked on or through them.

Dave is holding up his end of the deal. I’m way more concerned about the play of the perimeter players - especially on defense.

it was an encouraging sign to see the way they played in the second half, but they were also lucky that OSU was as terrible as KU was in the first half.

One thing that no one has talked about that I've been really impressed with is Marcus's FT shooting. When Marcus was a freshman, he was almost as bad as Dok -- generally in the 55-60% range -- and now he's well over 80%. I don't know if I've ever seen anyone improve their FT shooting that much in such a short time. Can anyone else remember seeing that before?

Jalen Wilson is the key to this team. Not sure if he will make the return to prior play levels being a redshirt freshman , but as he goes I would say the rest of the team goes.. IMHO.

yes David played great the second half against OSU...but could of cost us the game in the first half by missing very easy at the rim shots....1-7 first half...heck if he just made two more of those we have a 7 point half time lead instead of 3...could be the difference between a L or a W down the road.