Mitch Lightfoot a surprise star late in KU's marquee win over No. 2 Baylor 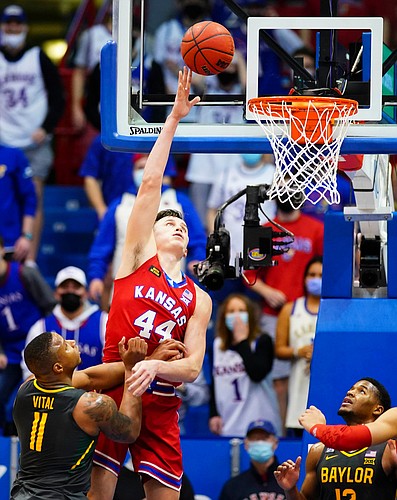 Kansas forward Mitch Lightfoot (44) gets up for a bucket over Baylor guard Mark Vital (11) during the second half on Saturday, Feb. 27, 2021 at Allen Fieldhouse. At right is Baylor guard Jared Butler (12). by Nick Krug

It took a lot of heroes in some fire red throwback Kansas uniforms for the No. 17 Jayhawks to knock off No. 2 Baylor inside Allen Fieldhouse Saturday night. So of course KU’s signature 71-58 victory needed a blockbuster level plot twist.

On a night when KU big man David McCormack annihilated the Bears inside, the Jayhawks had to go without him during a crucial stretch late in the second half, when McCormack got whistled for his fourth foul.

KU’s five-point lead didn’t disappear when Lightfoot checked in. It doubled in the three-plus minutes that followed.

Who saw that coming? Not anyone who had witnessed Lightfoot struggle recently when it came time for him to defend the paint in McCormack’s absence.

Lightfoot is without a doubt a fan and team favorite, but he only logged five minutes in each of KU’s previous two games against ranked Big 12 teams, Texas Tech and Texas. Opponents of late had found it much easier to get to the hoop for easy baskets when Lightfoot was manning the five position instead of McCormack. A little of that was even on display in the first half against previously unbeaten Baylor.

He wasn’t about to let that happen with a victory of this magnitude on the line, though. The first thing Lightfoot did after checking in late in the prime time battle was go at one of the best post defenders in the country, Baylor’s Mark Vital. Two dribbles from the left block into the paint with Vital on his back and Lightfoot scored right over him with a jump hook like he was the Jayhawks’ go-to big man, not a blue collar, often black-eyed backup.

As Lightfoot ran back to play defense, McCormack did the celebrating for him, jumping out of his seat on the bench to flex and salute the veteran.

The 6-foot-8 big from Gilbert, Ariz., wasn’t done there, either. Lightfoot put in a layup in transition off an Ochai Agbaji pass. And what would the Mitch Lightfoot experience be without his signature move, drawing a charge? His timing was perfect as usual when Davion Mitchell tried to attack him.

Lightfoot’s line won’t wow anyone: four points and four rebounds, and one block in 13 minutes off the bench. But the game easily could’ve taken a turn for the worse when he had to fill in for KU’s dominant big man.

That fact wasn’t lost on McCormack.   “I was proud of Mitch,” McCormack said after KU’s best win of the season. “Plays hard, rebounds, defends. I mean, he does it all.”

McCormack was in the midst of a masterpiece, but Lightfoot more than stepped up to keep KU’s post play at a high level when the Jayhawks couldn’t afford any type of dropoff.

Fellow KU veteran Marcus Garrett said Lightfoot gave the Jayhawks “a lot” late in the second half, despite the backup big’s slow start.

“I was talking to him the whole game. I was telling him, Mitch we need (you),” Garrett shared. “Because I know what Mitch can do for this team. And that’s what he did down the stretch. And we needed it big time.”

Bill Self almost went another direction entirely in the second half, he revealed during his postgame video press conference.

“Mitch wasn’t very good the first half,” Self said of why he hesitated initially about sending the veteran in for more against Baylor in the second half.

“We were talking to ourselves, ‘Hey, let’s just play small.’ And we decided to go with him the second half,” Self said, “and that was obviously the right choice.”

Lightfoot’s defense improved when the coach gave him a second chance, and a sub not known for his offense even provided two huge baskets at a crucial juncture, making KU’s upset possible.

“I was happy for Mitch,” Self said. “He’s such a good kid and tries hard all the time.”

Effort and pride never have been an issue for Lightfoot. And the whole roster embodied that spirit for the first time this season against Baylor.

It was a vintage Self-coached KU team Saturday night, and right on time, too, with March and the postseason right ahead. You never know who might spark a marquee win. And on this night Lightfoot deserved as much credit as anyone for the Jayhawks.

He costs us, at least 1 TO a game on the same moving screen - all these years; but boy, the guy can block dunks just like that; that's pretty darn impressive. What I really wish to see in him is a real high-level post play on offense. He took a closer position to the rim and did a prety jump hook against BU, that was like the best post move I've ever seen he did against a more athletic team. He just hasn't executed enough of those plays. He is very capable - but even he's in the 'low-post', he chooses to kick the ball out 99.9% of the time. I really hope he's confident enough to help in scoring. He's got another shot to prove it next season. Let's go, Mitch!!!

Steve and David, I agree with you that Mitch has a higher ceiling than previously demonstrated. Annually (every year), I expect to see a "step change" improvement in Mitch, but it never seems to materialize.

When he plays offense on the perimeter, he never even looks at the basket. He only looks to pass and then screen. His moving screens are also frustrating. Coach Self lacks confidence in Lightfoot's ability to shoot the 3 point shot. Mitch often plays like he is afraid of being benched, and who can blame him.

It is great that Mitch will be back for a Year #6! We will have his Phd soon. Talked with his grandparents in Morgantown his freshman year, they came all the way from Arizona to cheer him on.