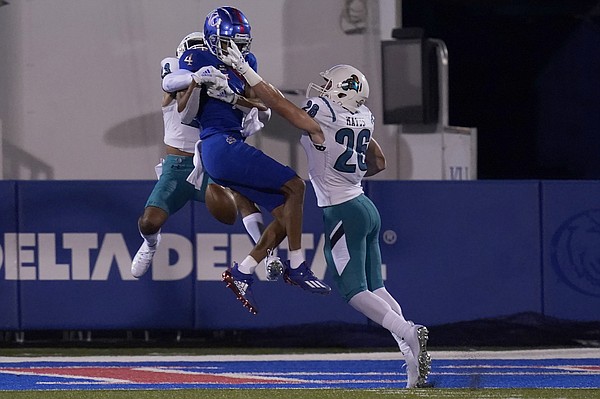 No one expected the Kansas offense to feature an elite passing attack when college football returned. But the first weekend of Big 12 games also magnified how far behind the rest of the league the Jayhawks might be in that category in 2020.

While Oklahoma, Texas and Texas Tech posted the top three passing totals among all the teams that played this past weekend, with each topping 400 yards, KU in its home loss to Coastal Carolina couldn’t settle on a starting quarterback and didn’t even crack 200 yards through the air as the three QBs who played combined for 35 passing attempts.

KU’s 189 passing yards versus Coastal ranked sixth in the Big 12 out of the seven teams that played. In Iowa State’s home loss to Louisiana, the Cyclones’ Brock Purdy was 16-for-35 for 145 yards against a Ragin’ Cajuns defense that finished 18th nationally in scoring defense in 2019.

When the 2020 season opened, neither of KU’s two primary QBs, starter Thomas MacVittie and essential co-starter Miles Kendrick, found any sort of rhythm in the first half, leading to the unproductive outing.

MacVittie ran into some bad luck on his first two series, with a pass to Lawrence Arnold going off the receiver’s hands and into the arms of a CCU defender. Next, on the second play of KU’s next possession, a quick completion to Takulve Williams ended up as a fumble recovery for CCU.

Then KU commenced with its QB rotation. Kendrick came in for a series. Then it was back to MacVittie. Then two for Kendrick to close the first half, with the first of those ending with an interception.

After MacVittie was the first QB to play in the third quarter for KU, the plan was put to a halt due to MacVittie getting hurt. Kendrick entered with a few minutes left in the quarter and handled the rest of the snaps until KU put in its reserves for the final 1:13 and true freshman Jalon Daniels made his debut.

Kendrick finished with far more passing attempts than MacVittie, even though he only played three more snaps.

A junior, Kendrick went 15-for-24 for 156 yards, with two touchdowns and one interception while playing 39 snaps. He was sacked twice, losing 11 yards.

A senior, MacVittie finished 5-for-9 for 20 yards, with no touchdowns and the one pick, on his 36 snaps. He was sacked once for a loss of 4 yards.

It remains unclear how KU will use its two QBs moving forward, or if MacVittie will be healthy enough to play in the Jayhawks’ Big 12 opener at Baylor on Sept. 26.

But based on the limited snaps we’ve seen from the KU offense so far, the rushing attack might need to become the focal point. Star junior running back Pooka Williams only had 12 carries and 67 yards before leaving the game with an injury late in the third quarter (Les Miles expects him back after getting “nicked”). And sophomore rusher Velton Gardner produced 81 yards and a TD on his 11 runs.

Although KU technically ran the ball more (38 attempts versus 35 passes) in its opener, the numbers are a little skewed due to sacks and other times a QB had to take off and run on a passing play. MacVittie, Miles and Daniels combined for 12 rushing attempts and 19 yards.

KU only had non-QBs running the ball 26 times. Not counting the sacks, KU rushed for 193 yards and averaged 5.5 yards per carry.

The offensive line’s pass-blocking in the opener was historically bad, too, as Pro Football Focus’ grades showed.

It will be interesting to see if all that transpired in a let down of a debut will alter KU’s upcoming offensive game plans. Relying on two running backs in Williams and Gardner might prove more effective than depending on two QBs behind an O-line that didn’t protect its passers well versus CCU.

According to CFBstats.com, KU’s 4.68 rushing yards per attempt ranks 15th nationally out of the 42 teams who have played so far in this strange season. The Jayhawks’ 5.4 yards per pass attempt ranks 34th.

Seriously. Kendrick outplayed MacVittie. And, Kendrick would have played better had Parchment and Co. not had so many 2nd half drops and busted routes and had KU played to save clock in the 2nd half a little earlier. Add in using Pooka and our Tight Ends a bit more and we might have been able to reduce the hole we got ourselves in. Carter Stanley went through this same mentality until his Senior year. But, regardless their experience, or technique & form, or practice performance, when you have a QB put the offense on his back, overcome come player incompetence, bad play calling, and have some success in spite, you would think we could learn to just put this one to bed and go with it.

Um...when you pass, three things can happen and two of ‘em are bad.

If this is "news" to the coaching staff, then that's a problem. You have a RB who has rushed for 1,000+ yards in back-to-back seasons and is Preseason All-Big 12. He's carried us the last two years and this year is no different. Yeah we have some talented senior WRs but Pooka is better at their respective positions. Get creative, get him the ball.

I didn't want to get political, but I noticed the "BLM Unity" logo on the KU football jersey. I'm all in for "Unity" and social justice. However, BLM is a political organization and is behind the abolishment of the police, and creation of Marxist government in America. BLM and Antifa have been involved in almost all violent protests in the United States.

Any money donated to BLM goes through their charity affiliate "ActBlue." All donations flow to the Democratic party, and various Marxist and Communist organizations. They work with organizations that include Planned Parenthood, MoveOn.org (George Soros), Democratic Socialists of America, and many other progressive and Left leaning non-profit groups.

I can't get behind anything attached to BLM. They are bad news.

I think we can agree that we are all inclusive at The University of Kansas. I think that everyone is excepted no matter their beliefs, their religion or race. BLM was originally a good idea that was definitely turned into exactly as you stated. If not then each time a black life were taken we'd see this kind of outcry but we don't. You hit the nail on the head with these riots. They stop becoming protests when looting, hurting people, and destroying property become the central point of your plight.

The idea that black lives matter is good. I guess I thought we were making progress along Martin Luther Jr.'s crusade. I don't think Obama helped matters as I had hoped. Evidently, there is much work to do, although I don't agree that racism is systemic in our country. I do like the KU "Unity" program. I will personally try to imagine that the letters B, L and M stitched on the KU uniforms stand for the ideals, not the disastrous BLM organization. I just pray that no funds are given to them.