Even in limited minutes, David McCormack can be impactful for KU 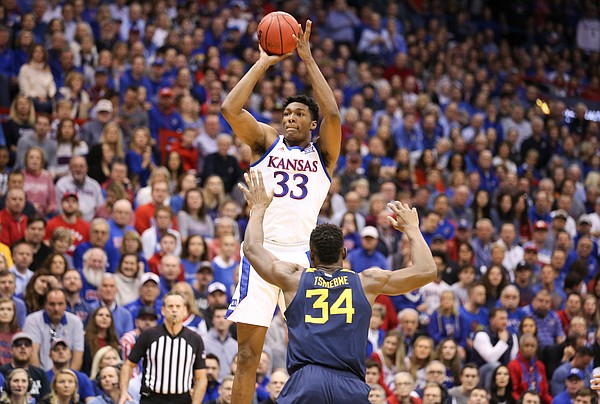 David McCormack is in a tough spot, which is a strange thing to say about a big man who starts for the No. 3 college basketball team in the country.

It’s just that the Kansas sophomore never knows from game to game how much playing time will be coming his way.

The Jayhawks, of course, open up against their opponents with an imposing frontcourt tandem in the 6-foot-10 McCormack and 7-footer Udoka Azubuike. However, KU often turns to four-guard lineups quickly, making it hard for McCormack to find minutes behind the team’s primary low-post player, Azubuike.

In the past two games, his 11th and 12th starts of the season, McCormack logged 11 minutes at Stanford and just 10 minutes — his fewest this year — against West Virginia.

Theoretically, it seemed KU might be able to get away with playing both of its big bodies versus WVU because the Mountaineers also start two behemoths, with 6-9 Oscar Tshiebwe and 6-10 Derek Culver. It turned out Saturday in Allen Fieldhouse wasn’t McCormack’s day, though.

As a result, KU didn’t turn to the potentially powerful McCormack when the second half began, and he finished the Big 12 opener with 2 points and three rebounds. Those were actually an improvement on his scoreless outing at Stanford on Dec. 29, when he recorded two rebounds and turned the ball over three times.

Nevertheless, the former McDonald’s All-American didn’t leave the win over WVU without showing a positive sign for the future. McCormack only played three minutes in the second half, at one point giving Azubuike a breather and later on allowing KU to play in a tight game without its worst free-throw shooter, Azubuike, on the court.

Fewer than 3:30 remained on the clock when McCormack, with KU up 6 points, delivered a critical and impressive sequence. McCormack first skied over Culver for a defensive rebound, then headed down to the offensive end, where his activity and instincts led him up to the rim to finish off a lob from Marcus Garrett for a slam, as well as what was KU’s largest lead of the game up to that point.

“David is usually the kind of guy with poise, and when he went back in the game down the stretch, he was great,” Self said. “And he went and got that ball, he went and got that rebound and Marcus made a perfect pass to him when we set something up for (Garrett) to drive it downhill.”

Those plays in crunch time by McCormack proved he can come through even when he’s had a subpar outing or he’s not playing 20-plus minutes like he did against Duke, BYU and Villanova.

McCormack’s only playing 16.5 minutes a game. More often than not, KU (11-2) will need him to do his best Azubuike impersonation as the No. 2 center for the Jayhawks’ four-guard lineups.

The physically gifted sophomore is capable of performing that role well this season. Set high ball screens and roll or slip for lobs. Post up and score from the blocks when defenses aren’t doubling KU bigs inside. And, of course, defend and rebound.

He could even turn into a more effective scorer by taking Azubuike’s approach to shot attempts when McCormack is in for the 7-footer. Per hoop-math.com, Azubuike attempts 75.8% of his shots at the rim (with dunks and layups). McCormack has only taken 39.7% of his shot attempts in that high percentage portion of the paint. On his 31 tries to date on layups and dunks, McCormack is converting 74.2% of the time, second among Jayhawks only to Azubuike’s 87.5%.

A starter and a role player all at once, McCormack has the right attitude and skill set to pull it off, difficult as it may be. The more effective he can be when it’s his turn to be KU’s only big on the floor, the better the Jayhawks will be overall.

1. If you watch the game vs WVU, Oscar gets a pass from 15 ft, fakes to the right, turns around, dribbles the ball hard for a dunk.

McCormack, on the other hand, gets a pass, stands in the same position only to pass the ball back out. He's not being guarded at all.

Houston, we've got a situation here. Not gonna blame the player, but it's the system. The way he's taught. He's got the tools. He's got nice footwork, nice shooting touch (although with somewhat weird mechanic). But if he's encouraged to take jumpers or be like Oscar, take a dribble or two and dunk, David can impact much more in a game.

2. As the writer states, McCormack can fly and finish strong on lobs. But the guards need to unselfishly helps him to score - he's perfect for this kind of play. But rarely do we see the lobs to the bigs till the most recent game (duh!). David has quickness, he's a big whose got hyper motor sensor. Can you imagine if Graham is still around?

Bottom line is, McCormack could be a more effective scorer, but he DOES NOT have to impersonate Doke. Nor does he need need to take Doke's shot attempts approach. Coaches need to encourage McCormack to take more jumpers, and encourage the guards to throw lobs or interior passes to him. Those, IMHO, will make McCormack much more impactful to the team. Defensively, I think he's doing alright.

Thanks for putting together an article like this. It's an embarrassement to our program, to have so many bigs, but only one that offensively impact games. We're half way in the season, ya? We good? Nah, not enough, coach. But we can be much better than where we are now!

I would say DMac controls his own destiny as far as minutes played. Anyone who is a starter just needs to come out aggressive on both ends of the court. If they do that, coach will leave them in. He is not going to take out someone who is impacting the game in a positive manner. Its when a player is just floating around out there and not being aggressive, that player puts themselves into the position where coach will make a change to see if a bench player can get things going. My advice to all of our starters, be aggressive, take the ball to the hoop. Good things usually happen.

McCormack will be the most important player on the team next season. Meanwhile, he is learning.