Jayhawks not far from maximizing their 3-point potential 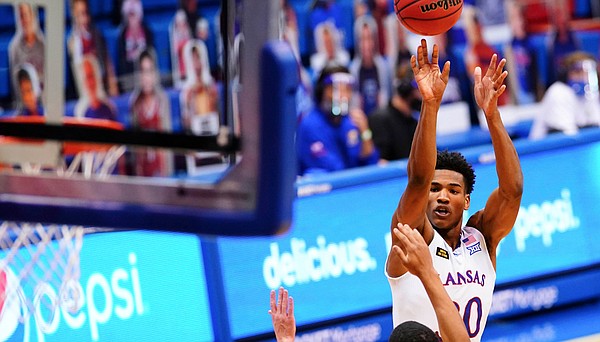 Kansas guard Ochai Agbaji (30) puts up a 3-pointer over Washburn guard Azeem Ross (3) during the second half on Thursday, Dec. 3, 2020 at Allen Fieldhouse. by Nick Krug

But in order for these Jayhawks to get the most out of their offense, Self would like to see them taking a few more shots from beyond the arc.

Given the way Kansas plays this year, either with just one big or with five perimeter players, and the skill sets of the rotation players, Self shared recently the Jayhawks need to take about 35% to 37% of their shot attempts from deep.

In five of KU’s first eight games of the season, the 3-pointers haven’t gone up with enough frequency.

Entering Tuesday’s Big 12 home opener versus No. 7 West Virginia, No. 3 KU has attempted 34.2% of its field goals so far from long distance.

But those numbers are a little skewed by two high volume days against two of the lesser opponents the Jayhawks have faced.

Here’s a rundown, by game, of the rate at which KU shot 3-pointers:

Obviously if the Jayhawks (7-1 overall, 1-0 Big 12) are looking to take a few more shots from downtown, those are the preferred options.

“I actually think Ochai and Christian and Jalen need to shoot it whenever they’re open,” Self said.

Even so, Self doesn’t think this team is far off from consistently making good use of the arc and the shooters KU has spotting up behind it.

There are actions the Jayhawks can take, too, to make sure they’re attempting enough 3-pointers without forcing the issue.

“We’ve been terrible drivers to pass,” Self said of one fixable issue to address. “We’ve been trying to score in tight rather than looking to pitch. There’s some things that we can do within what we do to shoot three more threes a game. I think we can get there.”

KU’s top shooters and the offense in general should benefit from point guards Marcus Garrett and Dajuan Harris — and really any perimeter player who gets to the paint to draw in the defense — driving and kicking the ball out when there’s no path to the rim for a high-percentage finish. Per hoop-math.com, an assist set up every 3-pointer Wilson has made so far. A teammate assisted on 19 of Agbaji’s 21 made 3-pointers and 12 of Braun’s 16 3-pointers came off an assist.

There are Jayhawks who could improve as 3-point options as the season progresses, as well. Self thinks freshman Bryce Thompson (5-for-17) will be “a really good shooter,” and junior college transfer Tyon Grant-Foster (1-for-10) should “look to shoot more.”

Multiple times already this season Self has brought up KU’s 2018 Final Four team and the names of marksmen Devonte’ Graham, Svi Mykhailiuk, Malik Newman and Lagerald Vick just to point out that this year’s team doesn’t possess those types of 3-point shooters (KU took 41.2% of its shots from 3-point range that year). But Self does think the 2020-21 Jayhawks can be “pretty good” from outside and he wants those deep shots — and the threat of them being made — spreading the floor to make the offense more effective.

“We do have enough guys that I think that have to be guarded, that can stretch the defense,” Self said. “And guys that can drive to force help and things like that. I do think if we could just tighten some stuff up we would be much harder to guard.”