Undersized Dajuan Harris didn't need to hit a shot to have an enormous impact vs. Kentucky 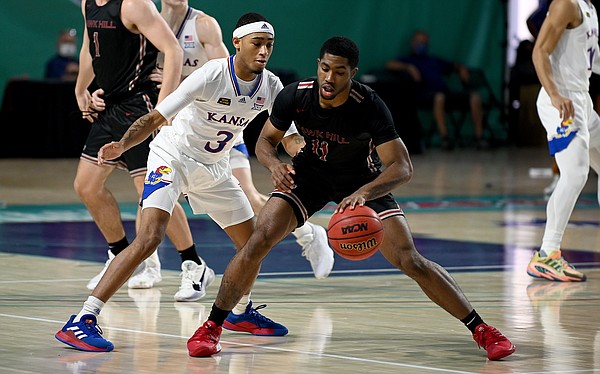 Kansas redshirt freshman Dajuan Harris defends the ball during a game against Saint Joseph's on Friday Nov. 27, 2020. The Jayhawks earned a 94-72 win over the Hawks in the Rocket Mortgage Fort Myers Tip-Off at the Suncoast Credit Union Arena in Fort Myers, Florida. by Photo by Chris Tilley

In a primetime battle between two traditional college basketball powerhouses, a redshirt freshman guard who lacked the size and wingspan of most of the players on the court helped carry Kansas past Kentucky.

Dajuan Harris, all 6-foot-1 and 160 pounds of him, didn’t even make a field goal for the Jayhawks in a 65-62 win Tuesday night at the Champions Classic. But everything else the backup point guard did made it possible for KU to win.

Other than Jalen Wilson, who handled much of KU’s scoring load on a double-double night (23 points and 10 rebounds) for the other redshirt freshman, Harris, head coach Bill Self declared, was the best player in the game.

That’s because, along with Wilson, Harris allows KU to unlock its best lineup, a five-guard combination that spreads the floor and moves the ball on offense, and can switch every screen defensively.

Harris’ final stat line read: two points (0-for-1 field goals, 2-for-2 free throws), one rebound, five assists, four steals, one block and no turnovers in 25 minutes. And over in the plus/minus column, the slight guard with the knack for making winning plays posted a team-best plus-12. KU outscored Kentucky, 53-41 when Harris was in, and the Wildcats held a 21-12 advantage when Harris sat.

How does a young player, especially at his size, come in on such a stage and impact the outcome of the game against No. 20 Kentucky?

Self during his postgame video press conference provided a rundown of all that Harris provides when he steps on the floor.

“He’s a great charge-taker. He’s got the best hands. He doesn’t really try to do much offensively except move the ball, which every team needs somebody like that,” Self began.

“His understanding defensively and his hands are terrific. He had four steals and I don’t know how many other deflections he had led to potential steals or steals,” Self added. “I thought he was great, and I’m really happy for him.”

Harris, who only played three minutes versus Gonzaga and 16 against St. Joseph’s, essentially became KU’s fifth starter against Kentucky, as Self again turned to five guard lineups when starting junior big man David McCormack ran into some issues against UK’s long and athletic front court.

As it got late in the second half, and No. 7 KU trailed Kentucky, 49-45, with 6:41 to go, Self subbed in Harris and Wilson for McCormack and Bryce Thompson.

Before long both igniters were making game-altering plays, just in different fashions. For Harris, a true old school, pass-first point guard, that meant hitting Wilson for a made 3-pointer, calmly knocking down a pair of free throws and securing a steal — and making the pass — that led to an Ochai Agbaji breakaway jam, as KU built a five-point lead a little more than four minutes after Harris and Wilson checked in.

“That’s two games in a row when Dajuan has came in when we need a spark off the bench and he’s given us everything that we need,” Wilson said. “It’s nothing shocking to me. I see ’Juan do this every day in practice, and I hope he continues to do this.”

Agbaji has known Harris dating back to before their time as KU teammates, as both players came up through the MOKAN AAU program. The junior thought the young guard was “special” versus Kentucky. And Agbaji thinks Harris can sustain his early season success, too.

“I’ve known him for awhile. I know that this is how he plays, just his IQ,” Agbaji said. “And the way he thinks and breaks down the game is great.”

Self described KU as “tiny” compared to Kentucky. But that’s perfect for these Jayhawks, who actually play their best with the 6-8 Wilson serving as the small ball stretch-5 and the undersized Harris utilizing his instincts on both ends of the floor.

As Agbaji pointed out, playing Harris also takes some pressure off of senior Marcus Garrett as the point guard.

Self used the five lineup of Harris, Garrett, Christian Braun, Agbaji and Wilson more than any other combination in the win, and that group outscored UK, 40-29, in 16:01 of action.

KU would’ve been in real trouble without Wilson’s scoring. But the Jayhawks needed Harris’ unselfishness and intangibles just as much.

“I thought he was really good tonight,” Self reiterated, “and certainly we don’t win the game without him.”

Great decision maker, great vision, and active hands on D. The team is much better with him on the floor. Should be a 4 year guy and that makes me very excited!

Grant - Maybe a 5 or 6 year guy. He’s already been here 1 and this one’s free. Could be a RSFreshman again next year 😷

It will be interesting to see if Coach Self keeps bringing him off the bench, or tweaks the starters to skip the part about digging a hole.

I think he'll keep trying with MacCormack and if he doesn't work out then he'll spot start against really big teams or teams with one really big guy.

Possessions count, and so far Kansas has had the first possession of all three games with Big Mac getting the tip. If only KU would score on those first possessions, the decision to start McCormack would be made all the more worth it.