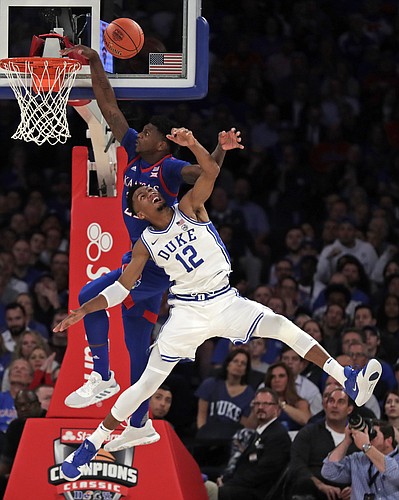 Duke forward Javin DeLaurier (12) defends against Kansas forward Silvio De Sousa, and is called for a foul during the second half of an NCAA college basketball game Tuesday, Nov. 5, 2019, in New York. (AP Photo/Adam Hunger) by Associated Press

The much anticipated season debut of Kansas big man Silvio De Sousa didn’t quite live up to the hype this week, when the Jayhawks lost to Duke at Madison Square Garden.

After a lengthy appeal process with the NCAA that won De Sousa’s 2019-20 eligibility back, the 6-foot-9 forward looked more like someone who hadn’t played in a college basketball game in 19 months than an instant energy provider off the bench.

Who would have guessed at any point leading up to the Champions Classic that De Sousa, who happened to have a breakout game as a freshman against Duke in the Elite Eight, would play fewer than eight minutes against the Blue Devils in the first game of his junior season?

It was 7:34 to be exact, with just one two-minute cameo in the second half of a tight game against one of the country’s best teams. De Sousa finished 0-for-2 from the field and 3-for-4 on free throws, with 4 rebounds (3 offensive), 3 points, 3 turnovers and 1 steal in KU’s loss to Duke.

So what does that say about where he’s at in his development? KU coach Bill Self had a straightforward assessment.

“He’s thinking,” Self said Thursday afternoon inside Allen Fieldhouse. “And he needs to get his motor turned up.”

De Sousa subbed in for sophomore David McCormack at the 16:34 mark of the first half of the opener, taking the floor in an official capacity for the first time since KU got blasted by Villanova at the 2018 Final Four. His first stint in the Jayhawks’ rotation since gave everyone who watched the game a sense of what Self has seen from De Sousa at practices. The big man from Angola’s only statistical contribution in a three-plus minute stretch early on came when he traveled after catching a pass from Udoka Azubuike on a cut to the rim.

When he returned for another taste later on in the first half, De Sousa had a steal and a turnover on one failed swoop, when he tried to outlet pass a loose ball but gave it right back to Duke.

De Sousa at least looked relatively more active in his brief second half appearance, with some offensive rebounds a couple trips to the foul line. But that wasn’t cutting it for Self, who said it was more than the glaring turnover mistakes that kept De Sousa from playing a significant role.

“You guys saw,” Self said. “There were some balls the other day, playing well below the rim, the backboard. Had an uncontested tip-in that he went with one hand.”

While the rust angle to De Sousa’s rough opener might be considered an excuse by some, Self called missing his entire sophomore season a “legitimate” reason for the big man’s issues.

“But also, you complement that with he hasn’t had a great last week,” Self reported of KU practices, “and he’s starting to doubt, ‘OK, where am I supposed to be?’”

Then Self hit on the crux of the problem. Both De Sousa and McCormack are really centers playing at a forward position. Neither is anywhere near a natural — on either end of the floor — on the perimeter.

“That doesn’t mean that they can’t play the 4 and the positions can’t be interchangeable,” Self said. “But when you’re going to play around Dok you need to be able to do some things, because Dok isn’t going to move very far from the basket.”

Basically, KU has three centers and zero ideal fits at the 4 spot next to its largest of the trio, 7-footer Azubuike.

“Those are things that he’ll get better at,” Self said of De Sousa acclimating to a different position. “And certainly when he played two years ago, our 4 man was Svi (Mykhailiuk) or Lagerald (Vick). So it’s a little bit different than what it is now.”

Perhaps Self is right, and De Sousa will adapt. He can certainly play with more activity and awareness than he showed in Game 1 of a long season.

How quickly De Sousa works out the kinks will determine how large a role he plays for this team, which may have too many old school centers to make the rest of the pieces fit cohesively in a modern college basketball game — unless Self opts to play one big at a time and go with four-guard lineups.

Whatever role De Sousa ends up playing when this team rounds into form in February and March, he doesn’t seem like the type of person who will languish just because his path to making an impact is difficult.

“He’s more than capable,” Self said. “He’s just thinking too much. He’ll get it.”

KU playing clean vs. Duke playing clean was no contest...KU started to wipe the floor. Coach will get the right rotation and get folks to be more agressive and smarter with the ball. We've got some straightforward games coming up where we need to take care of business and do what we are supposed to do. I'd say 10 or less turnovers in the game and our bigs scoring from inside the paint at least 15 times consistently would be a good signal.

Did anyone notice Dok made 2 of 3 free throws? When he relaxed a bit and softened the shot, nothing but net. Hope that continues!

He needs to be working with Perry Ellis every spare moment he has.

This is absolutely right. I'm not 100 percent sure on what type of coaching role Ellis can fill, but the two can talk a ton, Ellis can give him tips and advice and Silvio can learn the game the way Perry played it simply by picking his brain and trying to do as Perry suggests.

Silvio's much bigger than Perry and not as fluid but that doesn't mean he couldn't be somewhat as effective.

Everyone but Kansas has fours that can shoot.

Self comments that Dok won't spend time away from the goal. Is that a problem? I'm wondering if that hinders guards from driving to the goal. Maybe I missed it but can't remember Dok shooting more than a few feet from the goal.

Too slooow and he's got sticky feet, plus coach BS hi-low = disaster recipe for a successful career in NBA.