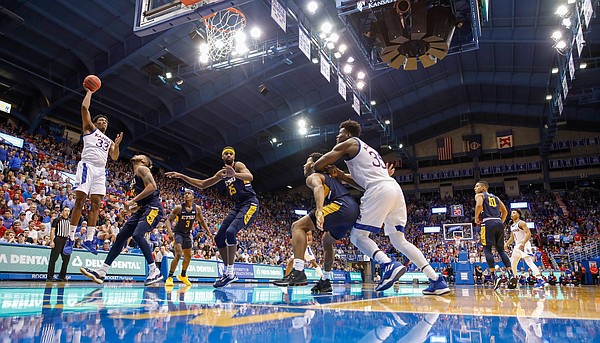 Kansas forward David McCormack (33) turns for a shot during the second half on Tuesday, Nov. 19, 2019 at Allen Fieldhouse. by Nick Krug

One spot in the Kansas basketball team’s starting lineup is subject to change. For now.

It’s mostly been David McCormack occupying the position up front, next to Udoka Azubuike, for the No. 4 Jayhawks. However, Bill Self isn’t opposed to going with Silvio De Sousa in his two-big starting lineup either.

A few weeks into the season, McCormack has started three games and De Sousa one as Self figures it out. But the coach said during his weekly press conference on Thursday he’d prefer to have the matter resolved rather than keep switching back and forth.

“I’ve always thought our best teams we all knew who was starting and who was coming off,” Self said. “I would think that that would be the case.”

Almost thinking out loud about the merits of both McCormack, a 6-foot-10, 265-pound sophomore, and De Sousa, a 6-9, 250 junior, Self remarked that McCormack has been the better of the two overall a mere four games into the season.

“But the way the game ended the other day,” Self went on, providing a counterpoint to his previous statement, “Silvio helped us win. And what he did defensively maybe nobody else on our team can do quite as well as what he does, what he did.”

De Sousa played the final 5:44 of KU’s win over East Tennessee State earlier this week, coming up with a steal, two blocks and a defensive rebound, as well as three baskets in the paint, as KU’s lead improved from 5 when he checked in to 12 by the final buzzer. De Sousa finished with 8 points and a rebound in 9 minutes off the bench.

That same night, McCormack, who twice this season has led KU in rebounds — 13 versus Duke and 11 adjacent Monmouth — only played 12 minutes and contributed 4 points and 3 rebounds as the starter.

“I really don’t have a preference,” Self said of which of the two bigs starts, adding he would see how practices go in the days leading up to the Maui Invitational before deciding which big would open KU’s next game on the court. “You know, it’s coach speak: it doesn’t matter who starts, it’s who finishes. But I know players don’t necessarily buy into that 100%, nor really should they — though I know it is important to some.”

The good news for Self, as well as the Jayhawks, is that it’s hard imagining two players better suited to handle this situation than McCormack and De Sousa. Their off-court personalities are similarly good natured and they both are high-energy competitors when they’re on the floor, making them uniquely equipped to keep battling for playing time without griping or second-guessing.

This Kansas team has a minutes crunch up front, because Self isn’t playing two big men exclusively, even though that’s how every game so far has begun. For long stretches, the Jayhawks roll with four guards and one big. And most of the time that one big man is Azubuike, the 7-footer with the career 74.6% field goal percentage.

“It’s been a grind for those two,” sophomore guard Ochai Agbaji said while praising McCormack and De Sousa. “They have great attitudes every game. Having that when they don’t have the opportunity to play (as much as they’d like) is always good for our team.”

Self said both McCormack and De Sousa “deserve” to play more. So far this season McCormack is averaging 16.7 minutes while De Sousa has only played 11.1 minutes a game. 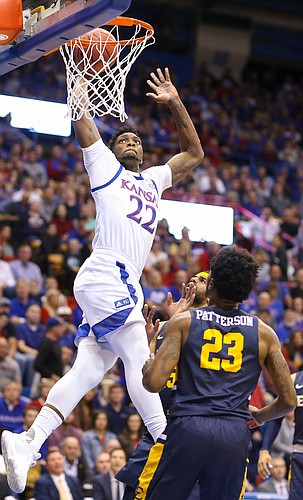 Kansas forward Silvio De Sousa (22) comes in for a jam off a lob from Kansas guard Devon Dotson (1) during the first half on Tuesday, Nov. 19, 2019 at Allen Fieldhouse. by Nick Krug

“But so much of it’s going to come down when you look at it to just a skill set and size standpoint, what we do well may not be exactly in line with what the other teams do well,” Self said of the four-guard KU lineups that eat into potential minutes for the two bigs in question. “So it will be game to game in many situations.”

McCormack might be the team’s best rebounder. De Sousa might be the best offensive rebounder and shot blocker — though none of KU’s three bigs plays like a true rim protector. Both can run the floor, bruise opposing frontcourt players and deliver the type of energy that can swing games.

That shouldn’t change when Self ultimately decides to start one over the other. If all goes according to plan, they can even be interchangeable energy players whenever needed. Their coach even likes the idea of being able to use playing time as a motivator for both.

“The reality of it is I think it does put an extra oomph in them when they get out there, knowing that if it doesn’t go great then somebody else probably can sub in,” Self said. “And if they play well it may limit your future opportunities, at least in that particular game.”

It’s easy to envision both McCormack and De Sousa as a starter or an ideal reserve big man. When one of them becomes the official owner of a starting position, the other shouldn’t feel neglected.

“I hope they both know that I see them as both being starters,” Self said. “As far as I’m concerned we’ve got six. And I hope they view it that way, as well.”

Whether it’s McCormack or De Sousa who locks down the starting spot, it’s a non-issue for Kansas. The Jayhawks will be fortunate to have one of them as a backup.

De Sousa might be perfect for the sixth man role. Flying for alley-oops, battling for offensive rebounds and bringing activity to the defensive end of the court makes De Sousa the type of player you can count on to bring some punch to the floor, and that’s a difficult commodity to find in college basketball.

The more De Sousa plays with the type of liveliness he showed in crunch time versus East Tennessee State, the more his minutes will go up, too, even as a reserve.

well, if we go with two bigs under 5 minutes left, both may play with Dok having to deal with the hack a shaq. I don't recall those two playing with each other that much, maybe we will start seeing both out there at the same time.

I think Silvio is a more natural four than McCormack and see his minutes continuing to rise.