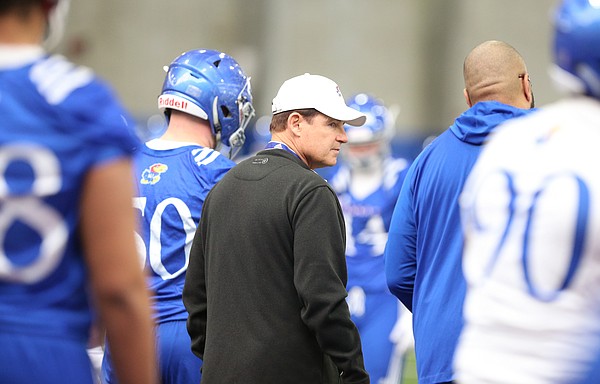 What a difference a year makes. Or more specifically, in the case of the University of Kansas football program, what a difference two leadership shakeups seem to have made.

A year ago at this time, when CBS Sports rolled out its rankings of Power Five college football coaches, the man in charge of KU football, David Beaty, finished dead last.

In the 12 months since then, KU chancellor Douglas Girod fired Athletic Director Sheahon Zenger, the man responsible for hiring Beaty. After observing what proved to be Beaty’s final season with the Jayhawks, KU’s new AD, Jeff Long, fired Beaty and replaced him with a reputable name and face (and hat) in the college football universe.

The presence of Les Miles didn’t propel Kansas from worst to first in the coach rankings. Far from it. But given how low the program has been, worst to 38th doesn’t look or sound that bad.

It’s not the kind of accomplishment that will inspire commemorative T-shirts, or even a social media hashtag, but seeing KU’s football coach ranked ahead of 27 other men in charge of Power Five programs seems like progress, even if the legitimate signs of growth will have to be proven in, you know, actual college football games this coming fall.

In the meantime, we have this list as one reminder that Miles’ presence alone has more people paying attention to KU, even at the national level.

Clearly the college football writers at CBS Sports who voted on these rankings don’t envision Miles’ arrival meaning the Jayhawks are ready to conquer and leapfrog a number of Big 12 programs. It just means Miles’ 142-55 combined record during his 15-plus seasons in charge of the football programs at Oklahoma State and LSU still carries some weight — even though when Miles makes his KU coaching debut this fall it will mark his first time on a sideline since September of 2016, when LSU fired him four games into the season.

Miles’ time away from the game likely hurt him in these rankings, which CBS’ Tom Fornelli points out involve “no strict guidelines.” Miles only ranks seventh among Big 12 coaches on the list. He’s ahead of Texas Tech’s Matt Wells (No. 43) and Kansas State’s Chris Klieman (No. 56), but the national championship ring Miles won at LSU to cap the Tigers’ 2007 campaign wasn’t enough to land him ahead of the Big 12’s seven other coaches more than a decade later.

Here’s a portion of what Fornelli wrote about Miles for the rankings, which counted down Nos. 65 through 26, ahead of the yet to be released top 25:

“I think there's been an overall tendency to underestimate Miles' ability as a coach, as people had a penchant for ascribing his success at LSU to it being LSU. Still, I think this is probably a little too low for Miles (I only had him at 33 myself) considering he has won a national title.”

The poll ranked Baylor’s Matt Rhule (No. 31) and West Virginia’s Neal Brown (No. 36) ahead of Miles, and when the rest of the list is published, TCU’s Gary Patterson, Iowa State’s Matt Campbell, Oklahoma State’s Mike Gundy, Texas’ Tom Herman and Oklahoma’s Lincoln Riley will be ahead of KU’s coach, too.

And if that fact ruffles your crimson and blue colored feathers, just remember: It could be worse. KU could have the 65th-ranked coach on this list.

If there are 2 behind him and 7 above him that would mean he's ranked 8th among Big 12 coaches not 7th.

It is interesting to consider what needs to happen for him to move up the list. The obvious answer is win, but a discerning mind realizes the question is how much? Does he need to win more than the other coaches to move ahead? Does the handicapping recognize that we are still rebuilding the roster?

I'd take 38th all day long, for awhile. I get the feeling that Miles is out to prove something when people suggest he won only because he was at LSU, forgetting about his achievements at OSU and minimizing the fact that LSU plays in what is constantly referred to as the toughest league in the country.

He has an enormous opportunity to seal his legacy by taking on the worst football program in P5 and making it competitive. Something that three previous head coaches could not do.

And I don't care where you coach, winning an NC requires excellence at some level. Can't wait for the season to start!

This ranking means nothing but if KU finishes 7th in the conference I will do cartwheels down Mass Street.

Happily, we are ahead of the purple kitty-kats at No. 56.