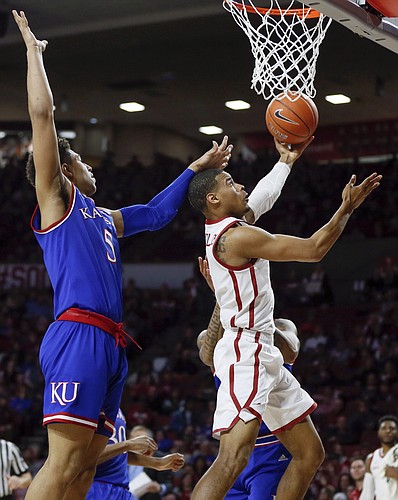 It took KU a little more than 34 minutes of action to hit the 50-point mark in its latest road loss. The game never looked close on the scoreboard until it was basically over, with OU leading by as many as 24 points in the latter stages of the second half. Let’s not give the Jayhawks credit for a 13-2 run in garbage time.

The offense lacked the type of flow and confidence to challenge the Sooners. The Jayhawks shot 40.9% from the floor, only made 7 of 31 3-pointers and turned the ball over 15 times. KU’s giveaways led to 21 OU points.

The Jayhawks had no answers for the energy and focus of OU’s offense. The Sooners connected on 7 of their first 8 shot attempts and KU never could squash that momentum with some defense.

Both Brady Manek and Kristian Doolittle destroyed Kansas time and again, with the visitors showing no ability to counter the attack and come away with stops.

Both Dedric Lawson and David McCormack contributed 18 points for the Jayhawks, and Lawson registered another double-double with 11 boards.

But neither big was the type of presence that could give OU serious concerns. Crazily enough, KU needed even more from them with the Sooners making KU’s guards mostly non-factors.

Not one member of KU’s backcourt stood out in this one, and, boy, did it cost the Jayhawks.

Quentin Grimes, Devon Dotson and Ochai Agbaji combined to shoot 7 for 25 and turn the ball over 7 times in defeat. They went a combined 2 for 14 on 3-pointers and were never able to adapt to OU’s inspired efforts.

The substitutes couldn’t give KU much of a spark either. Marcus Garrett’s 8 points and 5 boards made him the best of the bunch.

Mitch Lightfoot didn’t score, and neither did K.J. Lawson.

I've been trying for hours to watch the replay on espn, good thing the server is down and thanks for the evaluation, now I can sleep well.

They came to play. We didn't. Biggest game of their young careers, and they choked big time. Sad part is we all knew it was gonna happen. Fortunately, no more road games, it's all neutral or better from now on. But still, you have to bring more, if you want to be more.

Next year, freshman excuses will be gone. This team will have to be much tougher, or there will be another dose of disappointment. Our offense when it matters, is terrible. We are always in a hurry and going nowhere. No cuts, no flash?

Most KU teams peeked during the year, this team regressed. Why? Coaching? Part of the blame goes there. The players have to take responsibility also. Where was the motivation for this year's team, their mojo, the toughness, the leadership? I just did not see it.

I think espn took the replay off the web streaming. we played big monday, but was it that bad?