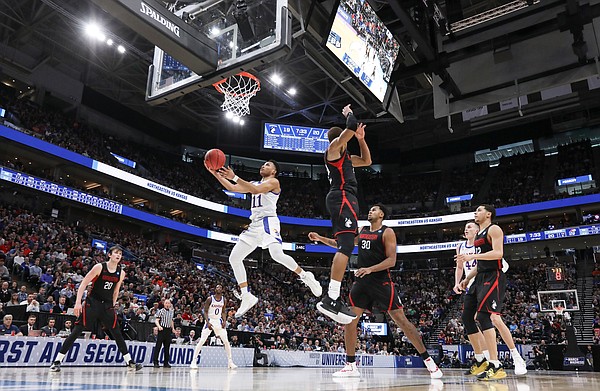 Kansas guard Devon Dotson (11) gets under the Northeastern defense for a bucket during the first half, Thursday, March 21, 2019 at Vivint Smart Homes Arena in Salt Lake City, Utah. by Nick Krug

Though the Jayhawks missed shots in the opening minutes, they were able to get out in front by securing second chances on the glass and getting out in the open floor for transition opportunities.

The Jayhawks’ burst of 7 consecutive fast-break points helped them lead 18-11 a little more than 8 minutes in.

KU’s clear advantage inside assured the No. 4 seed and favorite of easy points much of the first half.

After a low-turnover opening 20 minutes, KU coughed it up three times in the first three minutes of the second, allowing NU to trim KU’s lead to 7 quickly. However, the Jayhawks gave the Huskies a dose of their own medicine after a timeout, as both Quentin Grimes and Dedric Lawson drained a 3-pointer, and Lawson got back to work inside to give KU a 15-point advantage, its largest lead of the game at that point.

The Jayhawks dissected NU’s defense, shooting 56 percent from the field in a win that advanced them to a Saturday matchup with Auburn.

The Huskies’ 3-point attack proved effective right out of the gate in the first-round matchup, with Jordan Roland draining a couple and big man Tomas Murphy another to give the Vegas underdogs the start they wanted and a 3-for-5 mark from deep early.

Bill Self didn’t stick with his starting lineup or two-big look for long, though, and with four guards capable of defending the perimeter on the court, KU did a solid job in the first half of keeping Northeastern from getting hot from long range.

While the Huskies were able to get inside for looks, KU’s bigs did a nice job of staying active and making it less than automatic for NU in the paint, and the CAA postseason champs went 1-for-9 on layups and dunks in the first half.

Other than a defensive misstep here or there in the first half, Dedric Lawson gave KU exactly the type of first half it wanted out of its best player.

Lawson had 16 points and 7 boards by intermission, as well as a block and a steal as KU led 37-25 at the break.

KU’s go-to big entered the second half ready to resume his takeover. And once the Jayhawks got back on track by following his lead, Lawson was able to rest longer than usual for a stretch in the second half, en route to experiencing his first NCAA Tournament win in style, producing 25 points and 11 rebounds.

David McCormack started the game but only logged 11 minutes, many of them with the game basically over. KU played variations of its four-guard lineup through much of what turned into a rout and didn’t need its freshman big man much.

It became evident within a few minutes that NU didn’t have a defensive answer for Devon Dotson, especially in the open floor.

The freshman point guard’s confidence and assertiveness with the ball in his hands allowed KU to avoid any real first-half scare or nerves.

Dotson routinely sped by defenders, both in transition and in the half court. Just the threat of what he could do opened up the floor for his teammates, as well.

Though Quentin Grimes went scoreless in 18 first-half minutes, his defense was usually spot on and he continued to be an important passer offensively. The freshman shooting guard finished 1-for-5 from 3-point range and provided 3 points and 3 assists.

Ochai Agbaji’s best energy plays came when he crashed the offensive glass for tip-ins in the second half as KU was in the process of putting Northeastern away.

While Agbaji started, he played 20 minutes, coming through with 13 points and 5 rebounds.

Marcus Garrett didn’t start, but it only took a couple minutes for Self to turn to his team-first glue guy and sixth man. One of KU’s smarter players on both ends of the court, Garrett gave the Jayhawks their first separation of the afternoon when he scored back-to-back layups, the second of which he created by stealing the ball near midcourt.

While Garrett (8 points, 5 rebounds) was solid it was K.J. Lawson who stole the show off the bench.

K.J.’s first few minutes off the bench weren’t great, but that didn’t discourage him one bit. His assertiveness picked up when NU totally ignored him on a fast break for an easy layup in the first half and that seemed to empower him.

KU needed an offensive boost from someone off the bench and, boy, was K.J. the man for that job. The tough-nosed redshirt sophomore contributed 13 points and 3 rebounds.

I think the light has turned on for our young Hawks, Defense wins Championships, its why they lost the Conference Championship and Tourney, not cold shooting or "getting a flat tire". After all the roster changes, they are finally jelling, listening to Coach, focusing on the scouting report, and trying to make the other team play poorly, while KJ emerged as a weapon and the whole team gained confidence in a blowout produced by defense, not hot shooting. Auburn will be a much tougher test but I think they are going into it with the right frame of mind. Go Jayhawks!