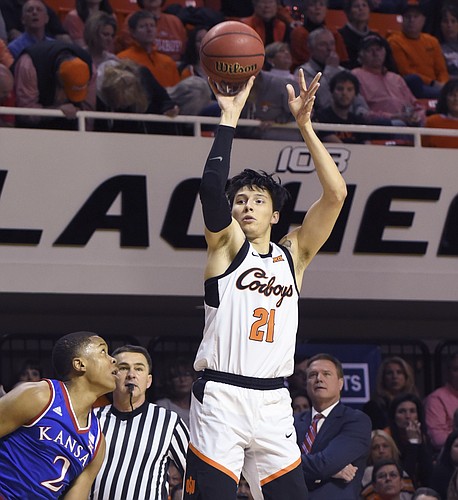 The visitors returned for the second half clicking offensively, with an 11-0 outburst putting the Jayhawks ahead by 4.

The offense wasn’t nearly as smooth or easy down the stretch, however. KU turned the ball over 8 times in the second half, oftentimes killing its chances of responding to timely OSU baskets.

At the free-throw line the Jayhawks shot 20 for 23.

The Jayhawks knew coming in how deadly OSU’s 3-point shooting could be, but that knowledge didn’t help them slow down the Cowboys in the first half.

Cameron McGriff nailed one, too, and OSU shot 7 for 14 on 3-pointers in the first half.

After regrouping at halftime, the Jayhawks’ defense played some part in an 0-for-4 OSU start to the second half from downtown. When Jones and McGriff hit back-to-back 3-pointers with less than 13 minutes to go, it appeared the Cowboys may be back on track.

OSU went on to finish 4 for 15 on 3-pointers in the second half.

The Cowboys scored 18 points in the paint.

Freshman David McCormack must be a morning person, because he came out assertive following the 11 a.m. tipoff.

McCormack was drawing fouls, getting to the free-throw line and scoring a layup fewer than 4 minutes into the game.

Again showing some steady improvement as well as some flaws, McCormack produced 5 points and 3 rebounds in 11 minutes.

The young big’s quick start helped offset a slow one for Dedric Lawson. The redshirt junior forward from Memphis struggled to get shots over OSU’s interior defenders in the opening minutes.

After an 0-for-3 start, Lawson got himself going by knocking down a couple of free throws. A layup and a jumper would soon follow and he had 6 points and 8 rebounds before picking up his second foul in the first half.

It didn’t take Lawson long in the second half to hit his standard double-double mark, and the big man finished with 20 points and 15 rebounds.

In crunch time, Lawson tied the game at 64 with a pair of free throws, fouled McGriff to set up a 3-point play for OSU, and missed a last-minute layup.

Then, with KU up 1 point and 14.2 seconds to play, Lawson nailed a pair of free throws to help keep the Jayhawks’ Big 12 title hopes alive.

Much like McCormack, freshman guard Quentin Grimes assured the Jayhawks of a competitive start on the road.

With a couple of attacks of the basket for layups in the first few minutes and a pair of 3-pointers in the minutes that followed, Grimes had 10 points fewer than 12 minutes into the must-win road game.

Grimes’ promising start carried over into the second half, as well. His 3-pointer in the opening minutes fired up the KU fans in attendance, and shortly thereafter Grimes’ passing proved to be key for KU’s offense.

The freshman guard’s three assists in the first 9 minutes set up his teammates for high-percentage looks.

His late-game 3-pointer tied the game at 67. Then Grimes (17 points, 3 assists) fouled out McGriff with a drive to the paint. Grimes’ perimeter defense also helped force a shot clock violation in the game’s final seconds.

Neither Devon Dotson nor Ochai Agbaji were effective offensively in the first half. Both of them made exactly 1 field goal in the first 20 minutes as they combined to shoot 2 for 11.

Dotson (4 points, 4 rebounds, 4 assists) didn’t score his second basket of the matinee until the 5:22 mark of the second half, but it tied the game at 62.

Agbaji (11 points, 5 rebounds) delivered a couple of big 3-pointers in the second half.

Agbaji sealed the KU win at the foul line with 4.4 seconds to go, hitting two freebies.

As you would expect, Marcus Garrett (6 points, 6 rebounds) and Mitch Lightfoot (7 points, 1 rebound) were catalysts as substitutes in a high-pressure road game.

Garrett came through with a critical defensive rebound with a little more than a minute to play.

Good win! But we can be so much better - lots of room to improve. Lightfoot + McCormack = Dotson rebounds#. I say that's pathetic. Garrett has more. How many assists would we have had those bigs caught those passes from their teammates. I blame again, on coaches for not teaching them fundamentals. they don't look ready with hands. Dotson's lob to Mitch - he lost it. Lawson to Mitch, he's to slow to react. Analyze this: Lawson got a nifty pass from Grimes, he already assessed situation, a bit fake, and scored easily. Compared that with McCormack: he's all alone, under the basket, got a nice pass from Lawson, he elevates and bring the ball all the way back behind his head as if he's going to destroy the rim ala Dok, but he got blocked from behind instead. One more time, Cormack got nice position down low when receiving a pass, he double pumped going up and got blocked. What are these bigs doing in practice? Even my son wondered why he didn't go straight up to the basket. SMH.... I saw nice bounce pass to a cutter early on, but we need more of bounce passes and lobs. We labored, we made easy game hard.. Hopefully, we'll play more effectively next time.