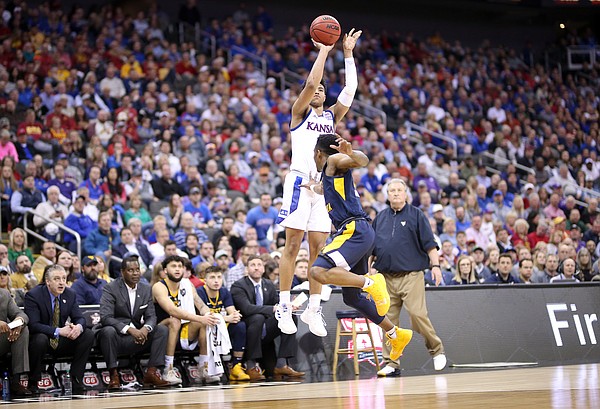 Kansas guard Quentin Grimes (5) puts up a three-pointer as he is fouled by West Virginia guard Brandon Knapper (2) during the first half, Friday, March 15, 2019 at Sprint Center in Kansas City, Mo. by Nick Krug

Kansas City, Mo. — For much of the regular season, those who follow Kansas basketball wondered when freshman Quentin Grimes might turn a corner and become the steady shooter and scorer the Jayhawks needed in the backcourt.

Perhaps turning the page to the postseason will do the trick.

Grimes shot 2-for-10 in his Big 12 tournament debut against Texas, when he scored 12 points in a quarterfinal victory, but he quickly moved on from that performance to set the nets ablaze in the semifinals. Grimes’ 5-for-8 3-point shooting led to an 18-point night for the freshman and the sense that he may finally be trending upward.

Even so, Bill Self wasn’t ready after that showing to place Grimes in the same stratosphere as a recent KU guard who caught fire just in time for March Madness.

One reporter asked Self whether the coach could compare Grimes’ uptick to what Malik Newman pulled off a year ago, during the 2018 postseason.

“If the guy goes off and gets 30 (in Saturday night’s final versus Iowa State),” the KU coach added, “and is the most valuable player of the tournament, then, yeah, you could say that.”

You may recall that Newman, like Grimes this year, had an up-and-down regular season before turning into “Postseason Leek.” Newman went off for 30 points in his Big 12 tournament debut versus Oklahoma State, then followed it up by pouring in 22 against Kansas State and finishing his three-day run with 20 more in a title game victory over West Virginia.

So Grimes would need to put on an extra-spectacular shooting display in the championship game to give the Newman comparison more weight.

“But what did he get today, 18? What did he have, 12, yesterday? So probably not quite that level, but it is a nice addition,” Self said Friday night at Sprint Center. “And to win three games in a row, especially the situation that we’re in, you’re going to have to have some guys step up that maybe haven’t been asked to do it in the past because they’re so young, and maybe play beyond their years. And Quentin did that today.”

Despite some rough patches as a scorer over the past few months, Grimes has now produced double-digit points in four of KU’s past six games. During that span he’s 17-for-35 on 3-pointers.

Self didn’t think there wasn’t a specific moment when he noticed Grimes shooting the ball with more confidence.

“I think everybody goes through phases like that. If you look at numbers, he’s shot it better in league play than he has for the season. But it’s been a gradual thing,” Self said.

What had stopped Grimes from getting going, Self pointed out, was that he would maybe have a decent night from 3-point range, 2-for-4 or something along those lines, and then go 1-for-6 the next game.

“I agree. He’s playing with more confidence, and good shooters shouldn’t remember their misses, they should only remember the makes,” Self concluded. “And I think he’s going through a phase right now where he actually feels that way.”

Grimes enters the Big 12 title game averaging 8.3 points for the season and hitting 35.9% from 3-point range.

From a 3 pt perspective, wasn't it just a the last 4 minutes or so of the first half where he made his 3's? He was 0-fer the 2nd half. That's not meant as a criticism. Just a reminder (similar to what Coach is saying?) that there hasn't been some massive transformation. He got hot for a short stretch.

I think Coach would also say though that he is happy with Q's overall development and impact on the game. Other players are still catching up to his passing so that beautiful A's aren't muffed into TO's, and all the guys seem to be generally switching and helping more and more on D.

It is nice to see individuals excel, and makes for fun stories, but it is the overall synergistic development of the team that is the best IMO. Maybe Ochai will explode today. He's been due for a while.

At the end of the day though, we're also going to need to clamp down on ISU, because they're on a little tear of their own.