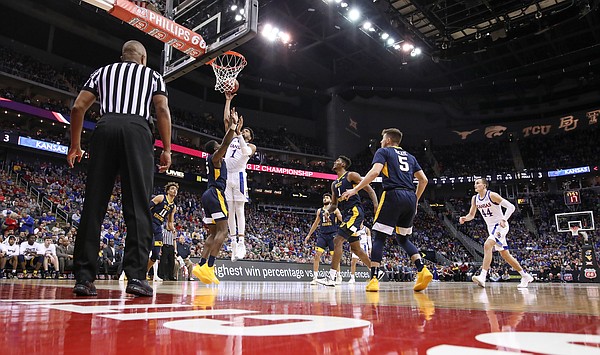 Kansas forward Dedric Lawson (1) turns for a shot over West Virginia forward Lamont West (15) during the first half, Friday, March 15, 2019 at Sprint Center in Kansas City, Mo. by Nick Krug

Kansas City, Mo. — Grades for five aspects of the Kansas basketball team’s 88-74 win over West Virginia on Friday night in the Big 12 semifinals.

If KU hadn’t turned the ball over 16 times there wouldn’t have been much to complain about on the offensive end.

Bill Self hated KU’s defense on this night, harping on WVU’s ability to easily score early on in the first half.

The Mountaineers shot 27.3% on 3-pointers and only scored 9 second-chance points. But they did make 43.5% of their shots overall, scored 40 in the paint and turned the ball over 11 times on the night.

David McCormack didn’t dominate in stretches like he did in the quarterfinals versus Texas, but the freshman big man still had his effective moments on offense, on the glass and with his effort, finishing with 7 points and 8 boards.

Dedric Lawson, on the other hand, was just as efficient as anyone could hope for. The junior forward shot 9 for 13 from the field, made 2 of 3 from 3-point range and connected on all 4 of his free throws.

Quentin Grimes caught fire in the first half, giving KU the momentum it needed to advance. Grimes drilled 5 of 8 3-pointers on the night and added 8 rebounds and 4 assists for a remarkable evening overall.

Devon Dotson, too, proved more than WVU defenders could handle on several occasions, and finished with 13 points, 5 rebounds and 6 assists.

Ochai Agbaji went for 9 points and 3 boards in 21 minutes.

Marcus Garrett keeps looking more mobile and comfortable on the ankle that hobbled him earlier this season. His defense and drives to the paint made him as valuable as anyone for KU, as he finished with 11 points, 5 rebounds and 2 assists.

Mitch Lightfoot also had his moments, though not as often as Garrett. The junior blocked 4 shots in just 15 minutes and scored 4 points.