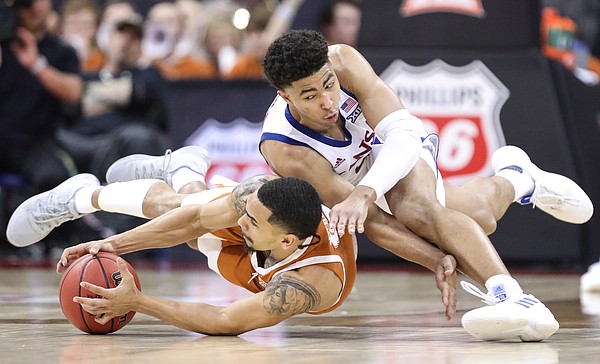 Kansas guard Quentin Grimes (5) and Texas guard Elijah Mitrou-Long (55) dive for a ball during the second half, Thursday, March 14, 2019 at Sprint Center in Kansas City, Mo. by Nick Krug

The offense was at its best when Devon Dotson was blowing past perimeter defenders to get to the paint, but not even his flashes of dominance were enough to keep Kansas firing on all cylinders for a full 40 minutes against a Texas team operating in NCAA Tournament bubble territory these days.

Remarkably, KU outscored Texas 17-0 in fastbreak points. It often had Dotson to thank for those high-percentage, energy-lifting scores.

Those numbers also set the Jayhawks up for a 34–20 advantage in points in the paint.

UT big Dylan Osetkowski (18 points, 3 for 7 on 3-pointers) was the only Longhorn that seemed too much for KU to handle.

The other Longhorns combined to shoot 14 for 43 from the floor.

It seemed UT would need to catch fire from long range to pull off a quarterfinal victory, but the Jayhawks held them to 8 for 25 on 3-pointers.

David McCormack spent stretches of his Big 12 tournament debut posting up like a man possessed, and with him overpowering UT bigs at times, his 13 points and 9 boards were critical components of the win.

Dedric Lawson didn’t have his most efficient night, shooting 6 for 15 on the way to 16 points. But he’s the type of offensive threat that just his presence on the court benefits those around him. And he hit a timely 3-pointer as a trailer during the second half, plus he chipped in 6 boards and a couple of steals and one block.

Dotson (17 points, 4 assists) controlled the game more often than not offensively, and his assertiveness propelled KU into the semifinals.

Grimes’ shot was off much of the night (2 for 10). But he reached double figures with the help of a crucial second-half 3-pointer and a 7-for-8 showing at the foul line.

Ochai Agbaji was the low scorer among the starters, finishing with 2 points, 3 rebounds and 2 assists in 26 minutes.

Marcus Garrett accounted for all 5 of KU’s bench points and drew the praise of Bill Self after the win. Garrett also pitched in 8 rebounds and an assist in 20 minutes.