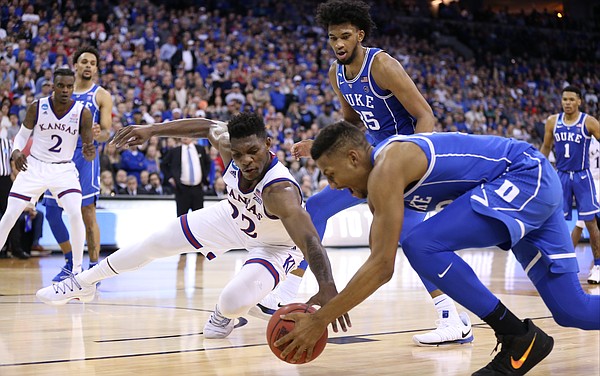 Kansas forward Silvio De Sousa (22) and Duke forward Javin DeLaurier (12) fight for a ball during the second half, Sunday, March 25, 2018 at CenturyLink Center in Omaha, Neb. by Nick Krug

Topeka — On what seemed at the time like an uneventful Friday afternoon in late May, a two-word text message sent University of Kansas guard Ochai Agbaji into a frenzy.

Quartlebaum’s text, which included a picture of a smiling Silvio De Sousa with his lawyer, delivered to Agbaji, Marcus Garrett, Udoka Azubuike and De Sousa himself, was how Agbaji, relaxing on his bed at the time, learned De Sousa’s appeal was successful and the forward had been cleared to return and play for the Jayhawks next season.

“After that I just lost it,” a smiling Agbaji recalled Tuesday, after spending some of his morning working as a counselor at Washburn University’s basketball camp at Lee Arena.

The chance for the Jayhawks to team up with De Sousa, a 6-foot-9, 245-pound forward, during the 2019-20 season felt gratifying for his teammates, such as Agbaji, because the whole ordeal dragged on for so long and seemed so beyond anyone’s control, making De Sousa’s future with the program a giant unknown.

“It’s something that we had, not really affecting us, but just something we had going on that was off the court, and it was really unnecessary I think,” Agbaji said, as he and other Jayhawks had their first opportunity with media members to reflect on the successful De Sousa appeal. “Having that done and good and having him back is really exciting. And I think it’s kind of motivating our team a lot, too.”

For the Jayhawks that May 24 victory is easy to lump together with Udoka Azubuike returning for his senior season and Devon Dotson withdrawing from the NBA Draft. But the De Sousa ruling and the emotions it inspired made it unique.

David McCormack recalled a push notification on his phone informing him of the De Sousa news. He said less than a minute later the Jayhawks’ group chat “blew up” because all of the players were chiming in, and sending messages to their rescued big man.

“Just congratulating him and (telling him) how we’re proud of him and all of that,” McCormack shared of the interactions within that ecstatic moment for the teammates.

KU walk-on Elijah Elliott was on a plane, coming back from the beach, when his phone began buzzing because of the De Sousa ruling. Elliott said he immediately called up the KU big man to share his excitement.

The outpouring of support had everything to do with what De Sousa’s teammates had witnessed over the course of the previous season, during which De Sousa never was able to play a game, was ruled ineligible and kept on practicing and believing in himself, despite his circumstances.

“His attitude never wavered,” Elliott said of De Sousa. “He never had a bad attitude. I think through the whole thing it was just constant with him and it paid off in the end.”

Although most of the college basketball world hasn’t seen De Sousa play since he carved out an important role for himself as a freshman on KU’s 2018 Final Four team, his teammates this past year, during a lost sophomore season for the forward from Angola, witnessed him improving behind the scenes, as De Sousa continued practicing with the Jayhawks.

“He’s just really been working on his skill set and getting better on different aspects,” McCormack revealed. “I would say shooting, dribbling, anything. His game I can see has just progressed all around.”

When De Sousa finally reemerges on the national stage this coming season for what looks like another Final Four contender for Bill Self’s Jayhawks, everyone will get to see for themselves what De Sousa’s teammates have been watching.

Elliott predicted the forward’s competitive nature will shine above everything.

“He’s super competitive, loves to compete,” Elliott emphasized. “Great teammate and gives it everything he has every day when he steps on the court.”

Popular with his teammates and the KU fanbase alike, De Sousa already has injected the Jayhawks with energy and momentum, and the season is still five months away.

Silvio is reason enough by himself to be at Allen every chance we get.

Best addition to this years team we could have hoped for!

Yes happy but very discouraged by the NCAA forcing him to sit out a full season. All the requirement to call an Addidas worker as a KU booster then giving the punishment based on that worker even though he wasn't an official KU booster. I believe that NCAA person should be fired and made recognized for his unacceptable decision. Even the people convicted received a punishment of less than 10 months.

I agree that the NCAA was clearly at fault in this whole mess. However, I think that DeSousa and KU should sue the NCAA for damages.