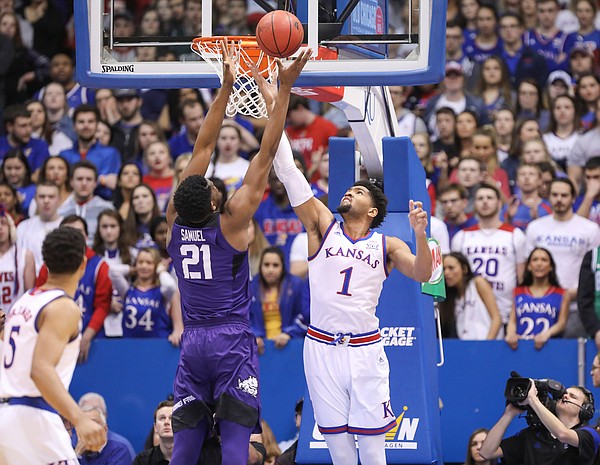 Kansas forward Dedric Lawson (1) battles for a rebound with TCU center Kevin Samuel (21) during the first half, Wednesday, Jan. 9, 2019 at Allen Fieldhouse. by Nick Krug

Grades for five aspects of the Kansas basketball team’s 77-68 win over TCU on Wednesday at Allen Fieldhouse.

No, the Jayhawks didn’t drain 3-pointers (5 for 21) as they converted to a four-guard lineup. But they still got the ball inside and scored 38 points in the paint without their 7-footer, Udoka Azubuike.

KU shot 43.3 percent from the floor against TCU and it wasn’t the team’s cleanest outing offensively. But Dedric Lawson played comfortably even as the Horned Frogs tried to swarm him, and Lawson’s ability to thrive allowed Kansas to get by.

The best thing KU did defensively was force TCU turnovers (20). The Frogs shot 46.3 percent from the field and 9 of 21 on 3-pointers, but KU’s guards were active enough to disrupt their foes much of the night.

Interior defense without Azubuike, though, remains a concern, especially for opponents who have go-to players inside, which TCU didn’t.

KU now operates with basically a one-man frontcourt and Lawson (31 points on 10-for-19 shooting, 14 rebounds) often was the team’s only answer offensively.

The redshirt junior had space to operate, and the next step for him will be setting up teammates with his passing. His low-post defense isn’t ever going to be a strength and that showed versus TCU at times.

The guards reminded you of why they’re not the focal point of this offense and rather the catalysts to sets and actions that feature Lawson.

Senior Lagerald Vick finished with 6 turnovers, but at least joined Lawson as a double-digit scorer, with 12 points on 5-for-10 shooting, and dished 4 assists.

Marcus Garrett scored a pretty layup off a drive in the half court and put up 8 points, but shot 3 of 8. His ability to defend, though, remains a strength and a key to KU’s future success.

K.J. Lawson contributed, too, with activity on the offensive glass and energy that helped him score 7 as a sub.

Marcus Garrett is a terrific defender.

Below average 3pt teams having season high 3pt %s against KU is getting very old. What the hell about KU is it that opponents seem to catch fire? First ISU...now TCU...who the hell is next?

Every time Vic gets the ball, I hold my breath. He might make a turnover, throw up a wild shot, he just scares me to death. 13 turnovers in 2 games that is really bad.