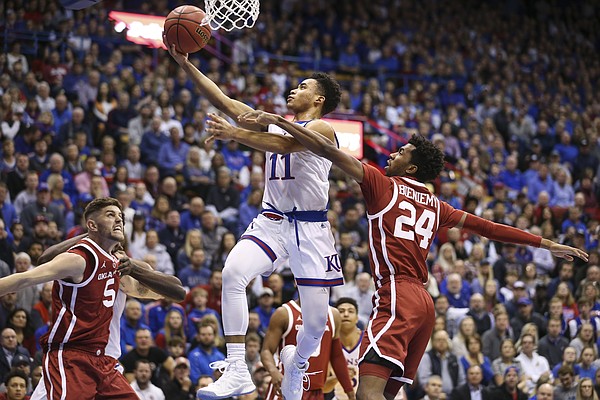 Kansas guard Devon Dotson (11) cruises in for a bucket past Oklahoma guard Jamal Bieniemy (24) during the first half, Wednesday, Jan. 2, 2019 at Allen Fieldhouse. by Nick Krug

Quick grades for five aspects of the Kansas basketball team’s 70-63 win over Oklahoma on Wednesday at Allen Fieldhouse.

The defending Big 12 champs got off to a slow start in their league opener, missing makable looks while the visiting Sooners jumped out to a 9-2 lead less than four minutes in.

The Jayhawks wisely responded by attacking the paint, scoring their first 18 points of the evening inside and taking a 12-11 lead on a Quentin Grimes fastbreak layup just past the 12:00 mark of the first half.

It wasn’t until Grimes buried a 3-pointer from the right wing at the 9:09 mark that KU scored from outside the restricted area and by then, all the work KU had done in transition allowed the Grimes 3 to extend KU’s lead to 21-11.

A 40-25 halftime lead was comfortable, for sure. But KU wasn’t as smooth offensively when it wasn’t able to get out in the open floor. That showed up early in the second half, as the home team went more than five minutes without as much as a single point.

KU’s first point came on a Marcus Garrett free throw at the 14:26 mark. The Jayhawks, after an 0-for-8 start to the half, finally got a bucket when Dedric Lawson drove at Brady Manek and scored over him inside with 13:02 to play.

That spark, although small in the moment, foreshadowed a matchup KU could exploit later on, serving as a relative turning point for the offense after intermission as KU held on.

KU thrived early on OU turnovers, scoring 15 points off Sooners miscues in the first half alone, with the Jayhawks swiping six steals in the process.

The Sooners went much of the night without finding quality looks and their best chances often came from behind the arc, where the visitors struggled (see: 2 for 12 in the first half).

Though OU entered with confidence and just one loss on the season, KU’s defense never hit much of a lull and the Sooners were rarely able to thrive.

It was a slow start for KU junior forward Lawson, who missed his first seven attempts. But the versatile big scored a couple layups late in the opening half to at least bust out of the 0-for night he was having.

Lawson really started rolling near the midway point of the second half, a stretch that jumpstarted with him going at Brady Manek one-on-one. Lawson scored six points in a crucial two-minute stretch for KU, which went from up five to up 13 in a hurry with Lawson as the focal point offensively.

The junior from Memphis kept his season averages above the double-double level, finishing with 13 points and 15 rebounds. He even blocked a shot in crunch time.

Udoka Azubuike looked to be his typical unstoppable self inside, going 4 for 5 in the first half for eight easy points, as well as six rebounds. But a slow start to the second half for the 7-footer kept him on the bench for stretches, and in the final minutes Azubuike watched form the bench, with OU looking to foul the big man.

Azubuike ended up with 8 points and 9 rebounds.

Though none of KU’s trio of starting guards ever took over for a stretch, they more than held their own versus OU and rarely looked overwhelmed.

Grimes ran his way to some easy transition points and produced 14 points in the victory.

Dotson’s heady take to the rim off a loose ball with 2:35 to play turned into an old-fashioned 3-point play and a 65-56 KU lead.

Senior Lagerald Vick was willing to take shots when KU needed something to go right offensively. Though Vick only hit 2 of 7 3-pointers, he provided 12 points for KU, as well as 4 rebounds and 3 steals.

Vick’s confidence never wavered, but he coughed the ball up 4 times.

Charlie Moore went 0 for 4 from the floor and 2 for 4 at the foul line.

I would give our freshman backcourt a better grade, maybe a B. 30 points from those two every game would be awesome with a capital A!

"The sophomore guard scored all 5 of KU’s 7 bench points"?

It's that new math.