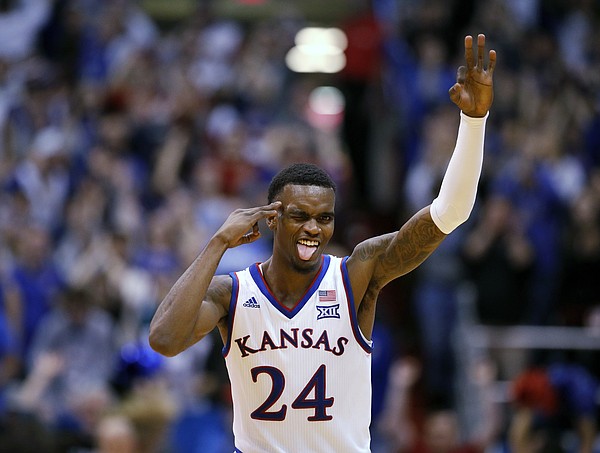 Whether it proves to be a two-game solar flare or the type of burst that can keep his right shooting hand comfortable and confident the remainder of the season, there is no denying that Lagerald Vick is on an upswing.

After opening Big 12 play by connecting on 6 of his 20 3-point attempts as Kansas got off to a 2-1 start, the Jayhawks’ pre-eminent marksman began feeling it again this past Saturday at Baylor. Vick nailed 6 of 8 from behind the arc on his 22nd birthday and his game-high 18 points vaulted him into 1,000-point territory for his career.

More importantly for the Jayhawks, whose 35.5 percent 3-point accuracy on the season ranked 130th nationally entering Wednesday, Vick didn’t fall off versus Texas. The 6-foot-5 guard from Memphis buried 5 of 8 from downtown on Big Monday, again leading KU in scoring, with 21 points.

Vick’s 11-for-16 accuracy in two more victories was a welcome development for KU (15-2 overall, 4-1 Big 12), because the roster isn’t exactly teeming with deep threats. And even though Vick is shooting a blistering 47 percent on 3-pointers on the season, he just emerged from what felt like a worrisome five-game lull.

Not coincidentally, the Jayhawks went through their roughest 3-point shooting stretch to date as Vick’s productivity from behind the arc dipped. KU connected on no better than 33.3 percent of its 3-pointers during those five games:

According to Vick, he and his teammates didn’t get too discouraged when their outside shots were misfiring.

“You’ve got to just keep shooting. They’ll eventually start falling,” Vick said after KU knocked down 11 of 22 against the Longhorns, two days after the team’s 9-for-16 showing at Baylor. “We’ve got a lot of guards that we can throw (out there) that shoot the ball pretty good.”

The only other time that KU dipped below its season average of 35.5 percent 3-point accuracy for at least two games in a row, Vick wasn’t exactly on fire. That’s no fault of his, either. It’s unreasonable to expect even the purest shooter to go through a five-month season without experiencing some peaks and valleys.

Vick went 0 for 2 and scoreless against Wofford, 1 for 3 with 5 points versus New Mexico State and a respectable 3 for 8 while otherwise torching Villanova for 29 points. He made 38.5 percent of his 3’s during those three games. Not bad at all.

Here are KU’s long-distance numbers from that three-game dip:

Having accounted for 54 of KU’s 120 3-pointers through 17 games, Vick averages 3.2 makes a game from distance, on 6.8 attempts. Freshman Quentin Grimes is the only other Jayhawk averaging more than one made 3-pointer a game (1.2), and Grimes is hitting just 30.3 percent from deep up to this point.

Vick’s easily KU’s best long-range threat. And opponents are very aware of that fact. The senior shooting guard admitted it can be difficult when defenses are strategizing to slow him down as a shotmaker.

His head coach, Bill Self, downplayed the notion that increased attention from opponents had much to do with Vick’s recent lulls.

“That’s sports,” Self said. “You can ask James Harden the next game when he makes six 3’s, ‘What was different?’ He’ll tell you, ‘Nothing.’ So I don’t think there’s anything that’s a lot different going on.”

When Vick starts rolling, it invigorates the rest of the Jayhawks around him. And his post-3 celebrations have become a regular ingredient of KU victories.

“I have fun, regardless,” Vick said, when asked of those moments when he lets his guard down and revels in his on-court successes.

His coach doesn’t mind those occasions, either, because Self realizes how much Vick’s 3-point shooting means to this team.

Even better for both the Jayhawks and their sharpshooter, Self also has spotted Vick handling his role with more poise lately, and adjusting when defenses key in on taking away his bread and butter.

“I do think his shot selection is better. When he doesn’t shoot the ball particularly well and he can’t get off a good look, he’ll force some shots. And I thought (versus Texas) he only took maybe one that was marginal,” Self said. “The other ones were pretty good looks.”

Bingo. We don't need threes for the sake of threes. They serve a purpose. Make some, and force the other guys to guard the perimeter. Move the ball inside out a lot and you'll get them turned around the wrong way.

The biggest key is scoring more points than the other guys. I shall now sit back and absorb in the accolades for my utter brilliance reflected in the last sentence.

Agree! Been saying this all season. It seems to be either threes or dunks/layups. No high percentage perimeter shots and only a few tear drops. Thus, as you say, the key is to score more points and not to make more threes/dunks/layups. Better percentage shots could be the marginal difference.

And if you are the defacto, go to, 3 pt shooter on the team -- and you do your job, i,e make a 3, ---that's it. You did what you were supposed to do. You don't get an extra cookie or juice box or pat on the back. Don't engage in theatrics, grandstanding and chest thumping. Get back on D after doing what you are on scholarship to do. Every other KU player does. Before he got hurt Dok was supposed to rebound and jam. When he did that he might have yelled or showed emotion, but he got back on D and did what a teammate should do. Vick is a bad defender to start with -- so him taking a few extra beats to look into the stands for mom or shoot arrows is making him an even worse defender, is wasted effort and needs to go.

I just want to know when/if, Grimes #2 SG in his class?, is going to start lighting it up on 3's.

I’ll take two for five from Grimes, like the last game. That’s 40%