Roadkill on Saturday, Jayhawks need injection of life at Allen Fieldhouse yet again 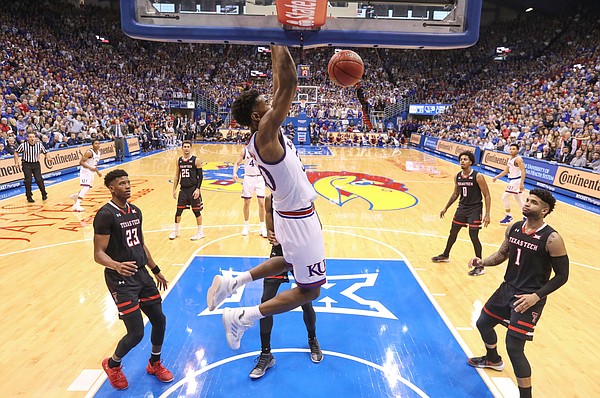 Kansas guard Ochai Agbaji (30) throws down a lob jam against Texas Tech during the first half, Saturday, Feb. 2, 2019 at Allen Fieldhouse. by Nick Krug

The healing salve to the Jayhawks’ road aches, pains and sometimes damaged psyches, Allen Fieldhouse will need to inoculate its inhabitants yet again on Monday.

Five times this season, the schedule has sent the Kansas men’s basketball team back to its home court following a road loss. And five times it has been just what the Dr. James Naismith would have ordered.

Turned into roadkill by Texas Tech in Lubbock on Saturday night, the Jayhawks look more wounded now than they have at any point in this season full of mediocre to poor showings on opponents’ home floors.

KU didn’t lead on the scoreboard at any juncture against the Red Raiders. By halftime, the Jayhawks trailed by 25, marking the program’s largest intermission deficit in 18 years. Once the final buzzer sounded on a 91-62 Tech rout, the 29-point beatdown doubled as the largest margin of defeat suffered by KU in Big 12 play since 2000.

Of course, the perennial league champs have a shot at cutting the Wildcats’ lead in half on Big Monday (8 p.m. tipoff, ESPN). And clearly, their pattern of following road losses with home wins should put the Jayhawks in a better head space than most teams would be coming off such a potentially catastrophic loss.

The framework for KU recoveries began in December. Kansas lost at Arizona State by 4, and returned to Lawrence to beat Eastern Michigan by 24.

More strenuous turnarounds would follow. After a 17-point loss at Iowa State, KU defeated TCU by 9 in the Feldhouse.

After hitting the pothole that was a 1-point defeat at last-place West Virginia, the Jayhawks recouped with a 4-point home victory over Iowa State.

Following double-digit losses in back-to-back road games — by 18 at Kentucky and 10 at Texas — KU got right with some home cooking in the form of a 16-point win against Texas Tech.

And when the Jayhawks were right back on the road three days later, leaving Manhattan with a 7-point defeat at the hands of rival K-State, they went right back to their winning in Lawrence ways, beating Oklahoma State by 12.

Now 15-0 in Allen Fieldhouse overall this season and 7-0 against Big 12 competition, KU gets a rematch with the Wildcats, who have used a 6-1 road mark in Big 12 games to achieve their spot atop the standings.

K-State couldn’t win at Texas Tech in its first league road game of the season, but Bruce Weber’s bunch has rattled off six straight wins in opposing Big 12 venues since: by 1 at Iowa State, by 13 at Oklahoma, by 18 at Oklahoma State, by 7 at Baylor, by 7 at Texas and by 14 at West Virginia.

There’s a 12-point loss at Texas A&M and a 14-point home loss to Iowa State mixed in there, too, during that stretch, so the Wildcats are far from infallible. But they should be as inspired as ever, knowing a win over KU would all but put an end to the Jayhawks’ 14-year reign as Big 12 champions.

Will that be enough to ruin KU’s always handy home court elixir, though? The Jayhawks have known nothing but success inside Allen Fieldhouse this season, and with the stakes higher than ever, the crazed fans that back them should be ready to provide the juice necessary for a 48-hour recuperation.

KU needs to win out and get some help from teams playing against Texas Tech (22-5, 10-4) and K-State to keep the program’s Big 12 title streak alive. An injection of new life from a home win over K-State is the most crucial step in that playing out.

Forget the conference title. Just win tomorrow because it's against K-State.

I am pretty sure that was supposed to say the largest defeat in conference play.....

Yep. Forgot to add conference play on that one. Appreciate the help, all.

Just play hard give 150% make Darnell Valentine, Jo Jo White, Wilt, Vaughn, Heinrik, Collison, Pollard, LaFrenz all the legends proud of you. Wear your jerseys in pride and earn the right to wear them they are not a gift. Go Hawks!!!!

I hope that the KU coaching staff shows up tomorrow. They were absent in Lubbock.

Hard to win like we normally do when down two superstar players. We've had a lot of things go right for us over a 14 year span. Let's just beat K-State tonight, and beat them bad!