Once Marcus Garrett is ready, transition should be smooth for Jayhawks 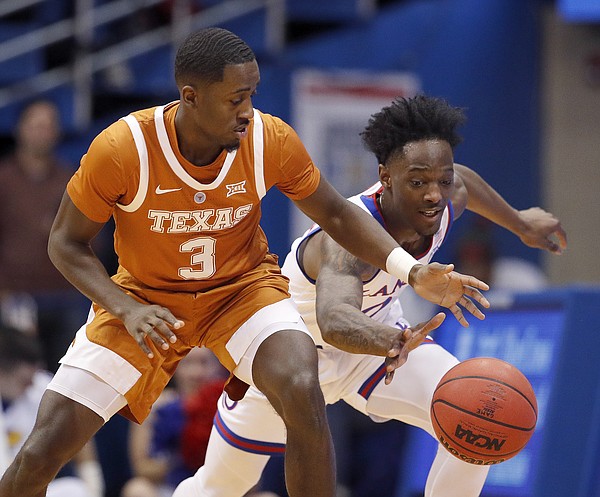 Losing a starter for five games in February isn’t exactly ideal for a college basketball team.

It’s this time of year when a season has the potential to turn, for better or worse, and fine-tuning lineups and roles can set a team up for a March Madness run.

Considering recent personnel developments for Kansas, the past couple of weeks have gone about as well as coach Bill Self could have hoped, with the exception of the Jayhawks’ Feb. 5 loss at rival Kansas State.

KU lost starting guard Marcus Garrett to an ankle injury on the same day the team learned that the NCAA ruled big man Silvio De Sousa ineligible. And somehow, even without Garrett, who is averaging 28.8 minutes a game as a sophomore, Kansas is 4-1 since.

Now comes the tricky part, right? Garrett this week finally has been able to participate in practices as he works closer to a return. But when Garrett was out, freshmen Devon Dotson and Ochai Agbaji emerged as reliable producers for Kansas. What happens to the chemistry and flow and momentum when the Jayhawks are reintegrating Garrett into the rotation, possibly as soon as this Saturday’s crucial road test at Texas Tech?

KU can’t afford for its newest difference-makers, Dotson and Agbaji, to hit a snag at this juncture. How does the team’s dynamic change when Garrett is able to return?

Self has a two-word answer to that question.

Neither Dotson nor Agbaji should miss a beat when KU’s rotation gains some much needed depth with Garrett.

“That’s not Marcus' role anyway,” Self said of what Dotson and Agbaji have been able to provide of late. “Marcus should blend in better than ever now, because he should have more help around him."

Prior to Garrett’s injury and Lagerald Vick’s leave of absence, KU was probably asking too much of Garrett, an awesome role player, but not a go-to scorer by any means at this stage of his career. There was a four-game stretch in January when Garrett was averaging more than 10 shot attempts a game, beginning with his 20-point outburst in a home win over Texas.

The Jayhawks no longer need him to do that. They need Garrett’s defense, his ball handling, his ability to drive and dish, and his overall basketball IQ. But now anything Garrett provides in the scoring column will feel like a bonus. Dedric Lawson, Dotson and Agbaji have proven themselves as a trio of reliable scorers, and with Garrett’s team-first approach on the court, those roles might even become easier for them once he’s back.

Imagine if a player with the physical presence of Udoka Azubuike were returning at this point of the regular season, with March just days away. Sure, the Jayhawks would be ecstatic to have the 7-footer back, but an adjustment period would be necessary for involved.

Shifting back to lineups featuring the versatile Garrett, who can defend guards and bigs alike and even give Dotson some breathers at point guard, will be straightforward as soon as he’s deemed game-ready.

You never want to lose a starter and then plug him back in late in the season while hoping for the best, but doing so with Garrett will be painless for the Jayhawks.

Marcus Back = Mucho Good. We only get better. And we are going to need him badly the next two games.

The $64,000 question is who's minutes will he be taking over? Sounds like either Grimes or Big Mac/Lightfoot. Four guards wasn't working very well two or three weeks ago, so I guess we'll see.

We may not see Charlie Moore again.

When the season began one of our key strengths was our depth and we've seen it diminish by the loss of key players.

More is better. I'm sure Bill wants him back so at least he has the option to use him.

He may not change the team dynamic but he is going to take someone's minutes. If it's anyone other than Grimes then I think that's a mistake on Self's part.

You're obviously not messing with Dotson or Lawson. And you can't take away minutes after the kind of effort and production Lightfoot and Agbaji are giving. So it's gotta be Grimes.

I think his minutes will come from several people...obviously Grimes and Moore, but also a few from Dotson which I think needs to happen. He's playing too many minutes and we need to be able to give his legs a break going into March. I think if we have fresher players going into the end of games we'll hopefully see fewer turnovers and be able to close games out better than we have earlier in the season.

I think Bill outlined it perfectly. The main person he will sub in for will be and should be Grimes. Grimes is too inconsistent at this point to leave out there for long stretches. Agbaji is a decent defender as well, so I think getting Dotson some rest is the smarter move. You can always sub Moore for Agbaji if need be.

Garrett's defense and experience will only help this team, just make sure he doesn't feel like he has to be an offensive powerhouse. We have plenty of people who can take that role.

Garrett is the team's best and most versatile defender. He's going to play 25-30 minutes if his ankle allows. Everyone other than Dedric Lawson will have their minutes impacted slightly. Getting Dotson a breather from time to time is a good thing.

I could not tell if this means Garret will return as a starter or as the first sub in. Probably does not matter.