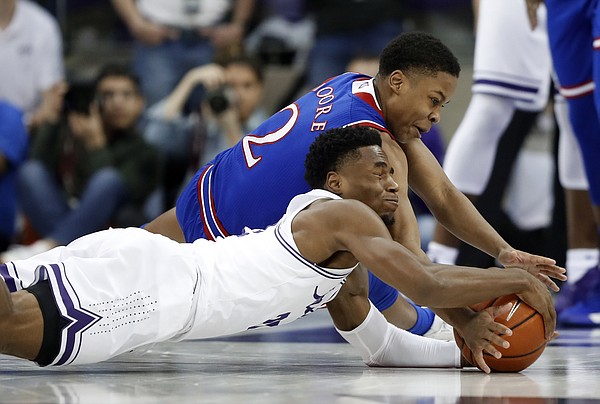 TCU guard RJ Nembhard, front, and Kansas guard Charlie Moore (2) wrestle on the floor for control of a loose ball in the first half of an NCAA college basketball game in Fort Worth, Texas, Monday, Feb. 11, 2019. (AP Photo/Tony Gutierrez) by Tony Gutierrez/AP Photo

Fort Worth, Texas — Grades for five aspects of the Kansas basketball team’s 82-77 overtime win over TCU on Big Monday at Schollmaier Arena.

The offense was just effective enough for the Jayhawks to get out of their third trip to Texas this season with their second road victory to date.

The visitors helped themselves out by keeping pace with TCU inside, where Kansas was only outscored 36-34 in the paint.

As we’ve seen on a number of occasions this year, KU finished with more turnovers (15) than assists (13).

The key, of course, proved to be timely baskets and some crunch time free-throw makes, the latter coming courtesy of freshman point guard Devon Dotson.

The biggest defensive accomplishment for KU in this one might have been the way the Jayhawks kept a potential 3-point killer from going off.

TCU never was able to deliver the type of prolonged outburst it needed to win, and give KU’s defense credit for that.

The Frogs only shot 38% from the field on 71 attempts for the night. KU held TCU to 36.4% shooting in the second half, as well as a 1-for-7 performance in overtime.

The Jayhawks won the battle of the glass, too, outrebounding TCU 49-43 in the crucial road victory.

It wasn’t one of Dedric Lawson’s more impressive games, and he still finished with a double-double (14 points, 10 rebounds).

But it took him a while to get going and he shot 6 for 16 from the field before fouling out with 2:26 left in OT.

Freshman David McCormack started again. And he once again played hard. But his energy only translated to 4 points and 4 rebounds in 17 minutes — and he only played several of those minutes due to foul trouble for Lawson and Mitch Lightfoot.

Freshmen Dotson (career-highs of 25 points and 10 rebounds to go with 5 assists) and Ochai Agbaji (20 points, 10 rebounds) were the stars of the night for Kansas.

Agbaji’s activity in everything he did gave KU energy and confidence, while Dotson’s ability to handle 45 minutes and only show fleeting signs of weakness keyed a win that feels like it could help the team turn a corner.

Quentin Grimes chipped in with 4 assists, but only scored 5 points on 2-for-11 shooting as KU played without injured Marcus Garrett again.

KU couldn’t have won without K.J. Lawson, who scored the basket that sent it to overtime, as well as the one that gave the Jayhawks the lead for good in the extra period. And he looked poised and confident in doing so.

Lawson’s 10 points and 3 rebounds in 16 minutes made him a standout performer, even though he rarely gets much of an opportunity to play.

Lightfoot again started the second half, and his interior defense helped KU build a double-digit lead in the second half. The junior added 4 points and 6 boards before fouling out in 22 minutes.

2 of the other 3 misses were by McCormick, again late in the game.