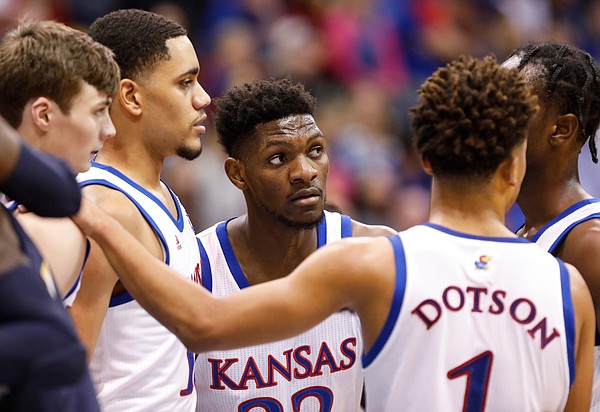 Kansas forward Silvio De Sousa (22) and The Jayhawks huddle up during the first half, Friday, Nov. 8, 2019 at Allen Fieldhouse. by Nick Krug

This college basketball season is a long way from over. But eight games in, it isn’t playing out the way Kansas forward Silvio De Sousa pictured.

The 6-foot-9 junior, after being reinstated and winning back his eligibility in the offseason, has yet to find regular minutes in the No. 2 Jayhawks’ frontcourt rotation.

De Sousa has played nine or fewer minutes in five of KU’s eight games, gone scoreless in three of those and even went one without recording a single rebound — the last of which came in one of the Jayhawks’ best showings to date, too, a win over Dayton in the Maui Invitational title game.

So where does De Sousa fit in, as the third big man on a team that starts two ahead of him but only plays one the majority of the time?

At this point he just doesn’t. Udoka Azubuike and David McCormack have been healthy and productive, turning De Sousa into a bystander.

Incredibly, the backup big man from Angola, averaging 8.8 minutes, 3.5 points and 2.5 rebounds, has done it all with a smile.

“I think being patient is one thing I have naturally,” De Sousa said Monday inside of Allen Fieldhouse. “I know how to deal with frustration, and I know how to control myself whenever I’m going through something like that.”

Obviously he would like to play more. De Sousa admitted as much during his session with reporters, on the eve of KU’s nonconference home date with Milwaukee. But he insists it’s not affecting him.

De Sousa might be saying that out loud and in front of cameras and reporters because that’s his nature. But his head coach will tell you it’s not entirely true.

De Sousa’s an easygoing person, and that’s no doubt helped him avoid becoming too discouraged with his current spot in the pecking order. But Bill Self doesn’t think the big man has been exactly patient in waiting for his turn to take off and become a fixture in the rotation. Nor would Self want De Sousa seeking serenity with his status.

“I never think that any good players are patient,” Self said. “I’ve always thought all the best players are always impatient, because they want it to happen yesterday, let alone with tomorrow.”

KU’s coach concedes De Sousa is a patient person. But the junior forward’s general cheeriness doesn’t have to color every aspect of his life.

“I don't think he's unbelievably patient just waiting his time,” Self said, “because he's not happy with where he is right now. If he was happy, then we wouldn't be very happy.”

De Sousa is nothing if not eager to play a larger role on this KU team. But until he wins over Self by bringing activity and smart defensive and offensive play to the court every time he checks in, it remains to be seen how much of an impact De Sousa will actually make this season.

He at least felt “a lot better” about his contributions in KU’s win over Colorado — and keep in mind De Sousa had 2 points and 3 rebounds in 11 minutes.

After spending the entirety of his sophomore season sidelined, as the NCAA ultimately ruled him ineligible before reinstating him in the spring, De Sousa didn’t enter his junior year with the experience of most upperclassmen. He described his first handful of games by saying he felt like they were going “100 miles per hour, and I was just going 40.”

He’s tried to make up ground ever since while figuring it all out and reacclimating himself to high-level college basketball.

Self said De Sousa played “fine” in 11 minutes against Colorado and maintained the reserve big man will fit in “fine” this season.

“But he hasn’t really had the chance to play and really gather momentum yet,” Self added.

De Sousa should be able to hit the accelerator again Tuesday night against Milwaukee (5-4). The rest of his teammates can do him a favor by handling their business and building a large lead that will afford De Sousa major minutes for a change.

This is a sound advice. I always tell my players to play "mad", play "in rage" mode - when they're frustrated with teeny weeny playing-time. The result is exceptional. They bang with shoulder when they dribble, they dribble the ball harder and go up with the ball (trust me, it helps), they push their defender to get open (as opposed to just extending arm asking for a pass), they run faster, they push opponents to rebound (instead of just watching the ball), they're more aggressive on defense. Being 'patient' is no good, my friend. No good at all. Ask yourself, how BAD do you want to be out there? Be BAD, play MAD!!