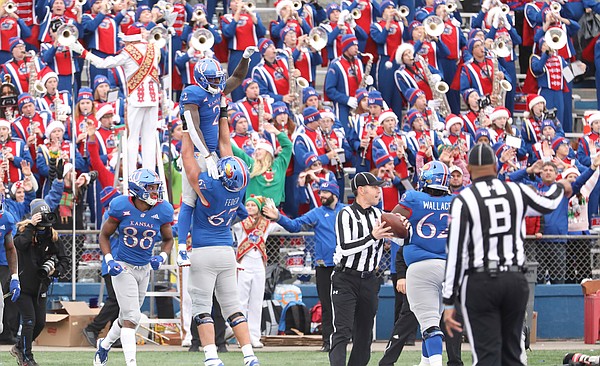 Kansas wide receiver Daylon Charlot (2) is hoisted up by Kansas offensive lineman Kevin Feder (67) after catching a touchdown pass during the fourth quarter on Friday, Nov. 23, 2018 at Memorial Stadium. by Nick Krug

It’s now been close to two years since Daylon Charlot weathered a shockingly unproductive season in his first year playing at Kansas.

After transferring in from Alabama and redshirting a year, Charlot, as a sophomore in 2017, caught all of one pass for 0 yards, while playing in 11 games — mostly on special teams.

Relatively speaking, his junior year brought with it some signs that the 6-foot, 193-pound wideout from Patterson, La., still had some fight in him. KU’s coaches at the time still didn’t use him as a starter, but in 10 games while buried on the bench Charlot finished with 12 receptions for 178 yards and a pair of touchdowns.

In the past, some ill-timed injuries slowed Charlot down from getting anywhere near the goals he had for himself and the expectations KU fans had for him as a talented target. When he looks back on it all and how far he already has come from his debut season, when he was barely an afterthought for KU’s offense, Charlot just anticipates the upcoming season even more.

“I believe I came very far from my injuries,” he said. “It was very hard facing the adversity I was going through. Health is a big part of it. That’s why I take care of my body more than I have the last year, because you know it’s my last year. I’m just trying to do great things for my team, just go out with a bang.”

With all that’s transpired since the end of his junior season, it feels like Charlot has been granted a rebirth at KU. Les Miles took over for David Beaty, of course. But more importantly for Charlot, he’s now spent the past several months with Emmett Jones as his position coach.

Jones isn’t sure why the previous staff never got the most out of Charlot, but KU's receivers coach loves the skill set of the senior.

From an individual standpoint, Charlot feels like a different and better receiver now than he ever did the past couple of years.

“I feel like I’m faster,” he began, when asked what he’s doing differently. “I can track the ball very well, even more better. And more focused, into my playbook every night, just trying to get everything down so I can have a great year.”

Charlot doesn’t want the coming season to be viewed as comparatively successful to his past two. His plan is to become a primary part of KU’s offense and prove himself. He thinks he has put in the effort to become impactful in the passing game. The bigger the splash he can make, the more satisfied he will be.

“I like the deep balls,” Charlot admitted, while discussing his favorite calls. “Every time they call like a deep ball play, I’m itching, hoping Carter (Stanley) or Thomas (MacVittie) throw it to me. Because I know for sure that I’ll catch it.”

In his mind, the perfect deep ball isn’t him running alone in space. He prefers jump balls.

“I’d say over somebody. I like challenging catches,” Charlot said. “That’s a thing that I’m very good at.”

Self confidence never has been an issue for Charlot as a football player. This year, he appears to have a coaching staff that believes in him, too. So 2019 should finally be the year that Charlot shows out for the Jayhawks.

If Daylon can produce consistently from play to play throughout the year, it will go along way towards a successful season.

Down to the final four. Who will they be?

Charlot averaged almost 15 yards per catch last season. He should have played, and been targeted a lot more!

The Proof will be in the Pudding!