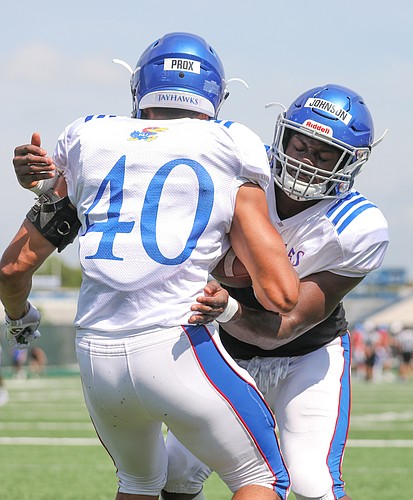 Kansas football coaches and players began raving about Kyron Johnson’s speed more than two years ago, when he arrived in Lawrence as an early high school graduate from Arlington, Texas.

A few defensive coaches, a couple position changes and some serious added bulk later, Johnson now has a bit of experience and muscle to go with his legitimate Big 12 speed.

On a defense lacking veterans and stability up front, Johnson looks like the exact kind of upperclassman the Jayhawks need in new defensive coordinator D.J. Eliot’s 3-4 scheme. KU’s defense will be in trouble if safeties Bryce Torneden and Mike Lee are the ones making all the tackles. With Johnson now at inside linebacker — he played outside in the spring and at one point was listed on KU’s roster at “Hawk” — the defense will have at least one returning player up front who has started Big 12 games and has a grasp of what it will take to go make plays near or behind the line of scrimmage.

Playing inside at linebacker isn’t new to Johnson. In fact, he spent some time there both as a freshman and sophomore at KU before coaches opted to move him outside. One major difference now, though, is he’s playing at about 233 pounds, as opposed to the 220 range of his sophomore season.

“Here I am — here to stay — inside,” Johnson said of bouncing back and forth between spots for KU’s defense the past couple of years.

In 2018, Johnson started seven games and appeared in all 12. He finished 12th on the team with 16 total tackles. That’s obviously not a large number, but it is the highest for a returning KU defender in the front seven. Johnson also recorded four tackles for loss, a pair of sacks, broke up two passes, forced two fumbles and recovered a fumble. So while it has only been seen in flashes, a knack for making potentially momentum-shifting plays definitely exists with Johnson.

Although he wouldn’t call himself a leader among the linebackers just yet, it’s easy to envision Johnson becoming that quickly. He’s definitely serious about the on-field responsibilities that come with playing inside linebacker.

“You have to think now,” Johnson said of one significant difference for him, compared to his former days on the edge.

“You have to really think about what you’re doing and everything that you do, because everything you do, you have to base it off the line, the back and everything around you,” Johnson explained. “When you’re calling the calls, you have to make sure you called the right calls. If not, we’re just all going to be in the wrong.”

Smart and more comfortable now on the field than he was the previous two years, Johnson seems like a safe bet to become a prominent defensive presence for Kansas this season.

Not sure who will be listed above him but could easily see him being even more important than this.