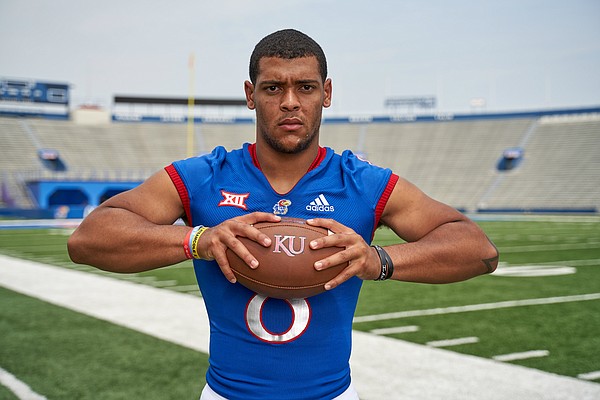 During his first game wearing a Kansas football uniform, backup quarterback Miles Kendrick only got onto the turf for six snaps.

The sophomore dual threat QB carried the ball twice, handed it off once and connected on two of his three throws during his cameo, which included a bit part on the Jayhawks’ final offensive play of overtime.

Now Kendrick’s goal is to absorb all he can, both positive and negative, from the small sample size of game footage at his disposal.

“I think I took a lot away from those reps,” Kendrick said. “There were different things that I see as far as the play calls. I could have changed my mind depending on what I saw, maybe change a route, an RPO or things like that. Nothing really major. We’re continuing to learn from every rep.”

On his first play from scrimmage, coming in for one series worth of relief for starter Peyton Bender with 9:14 left in the first half, Kendrick looked as if he may put the ball in the hands of running back Khalil Herbert before keeping it. Kendrick picked up 4 yards.

Next, on 2nd and 6, a little play-action allowed Kendrick to hit Evan Fairs for 8 yards and a first down.

Asked whether, instinctively, he would rather pass or take off and run on, Kendrick described himself as a “pass-first” QB.

“I just think I bring a different skill set to the table than Peyton. I mean, Peyton throws the ball incredibly well,” Kendrick said, “but I’m just a guy that brings a different dimension. Doesn’t mean I can’t pass the ball. I believe I’m a pass-first guy. Just another thing for the other team to prepare for.”

After Kendrick’s first throw at KU went for a 1st down, Herbert ran for 4 yards before the backup got back to testing his arm. On 2nd and 6 Herbert gave a little token fake handoff in the direction of Dom Williams before taking a deep shot down the left sideline to the Jayhawks’ top receiver, Steven Sims Jr.

On a pass that traveled roughly 40-plus yards in the air, from the right hash toward the left sideline, Sims couldn’t come down with a catch after leaping upward to get a hand on it.

KU also was flagged for an ineligible man downfield on the play, so it wouldn’t have stood if completed, but it still qualified for Kendrick as a chance to assess his skills.

“On that play they played press bail. Originally (we) wanted (Sims) to run kind of like a curl route,” Kendrick began. “But I saw the corner was pressed, so I gave him a go route and it was a 50-50 ball. If I were to replay it and try something else, maybe I would have just handed off the ball and see if our line could have gotten the four or five yards that we needed and my drive would have continued.”

A safety moving toward the line of scrimmage gave KU unfavorable numbers in the box, Kendrick said, so he tried to make a play through the air.

“Looking back at the tape, maybe a little bit underthrown, but like I said, 50-50 ball,” Kendrick said. “Those guys make plays and that’s their job. My job is just to give them a chance and hopefully they make me look good.”

Kendrick’s next throw would be his last of Week 1, as Kendrick shoveled the ball to Williams for a 4-yard gain, 2 yards shy of a 1st down.

Given the time he spent on the sideline and the situation, was Kendrick surprised when head coach David Beaty inserted him late?

“I’m the type of person, I’m always going to stay ready and I’m always going to want to be in that position,” Kendrick said. “Game on the line, that’s what you play for. I was excited when my number was called. It wasn’t like I was caught off guard or anything. You’ve got to be ready for anything. College football’s exciting. We have a great opportunity this season.”

KU sent five potential receivers out on what proved to be its final offensive play of OT. It was designed for Kendrick to take off and run, ideally for a 1st down or longer. However, Nicholls’ Sully Laiche tackled Kendrick for a 3-yard loss after executing a twist at the line of scrimmage. KU had to settle for a 41-yard Gabriel Rui field goal and a brief 23-20 lead.

I know we sometimes put too much focus on QB, but this call is still puzzling. It would be hard to count on any player in OT after not playing a snap since the 2Q, let alone the QB on the biggest play of the game #KUfball pic.twitter.com/dnn4RKy5Hg

Asked by one reporter whether he would do anything differently, now that he has looked back at the unsuccessful play, Kendrick said perhaps he could have checked into a different call at the line of scrimmage.

“At the end of the day I get the call from the coach and they ask me real specifically what they want me to do, and I try to carry out that assignment as best as possible,” Kendrick said.

The QB who provides KU’s offense with some different running possibilities than Bender went 2 for 3 through the air for 12 yards and finished with two carries that netted 1 yard in the opener.

“I’m going to stay prepared as much as I can,” Kendrick said. “Peyton is one play away from coming off the field, so either way all quarterbacks in the quarterback room have to be ready to come on the field at any given notice.”

If we are losing I would love to see us give him all the reps from there forward just to see what he can do. If we lose and he does not impress, let's turn to Carter. Keep trying until we find someone who can run this offense and move the chains.

Peyton might be the best qb but if we have a porous o-line then Carter or Miles might give us a better chance at moving the chains.

I don't understand the philosophy of this offense. Are we a RPO or Air Raid. To entirely different concepts and require different skill sets at QB.

You raise a good point. All summer long, the articles have been written that the focus would be more on running the football (and not so much on passing). Yet, it seems that the past game was more of the same (the fan base has seen in the prior 3 seasons). So, is Meacham just not that good of an Offensive Coordinator (as what we fans thought he would be, when he left TCU)? Or, has Beaty constrained Meacham so bad that Meacham can't really truly call a game plan that he desires to call? There's a REAL problem in the Coaching Box. And, it all begins at the Top. If the TOP Dog is a Micro-Manager, then all facets of the program are walking on egg shells. If the TOP Dog doesn't trust his assistants to coach as they were hired to do (without being Micro-managed), then what else are the assistants to do. Watching the few plays that are displayed on this article, I'd be real interested in seeing what Miles Kendrick could do for an entire game. This switching QB's every so many series, that's not allowing ANY QB to get into ANY kind of a rhythm. Therefore, they (being any of the QB's) are set up for FAILURE.

I believe that last year Beaty freaked out and tried to take over staff positions after some special teams mishaps. He later apologized and stated that he trusts his staff and will let them do the jobs they were hired to do but the points that you make are valid. It would be impossible for Beaty to not feel the pressure on him to succeed and feel like he has manage every facet of the program. IMO there seems to be a large disconnect from what they say they want to do to what actually takes place.

You're right. There's not much coherent about this coaching staff.

Kendrick has looked poor against a DII team. 6 snaps and 3 were poor decisions.

1 handoff. 1 decent run that could have gone for more. 1 qb draw that he did all he could w/ his Center missing a key block. 1 inside flick to RB 1 good roll out for a first down 1 underthrown ball that would have been picked off if thrown correctly/overthrown. He threw it to the only place that steven sims could have caught it and he should have caught it.