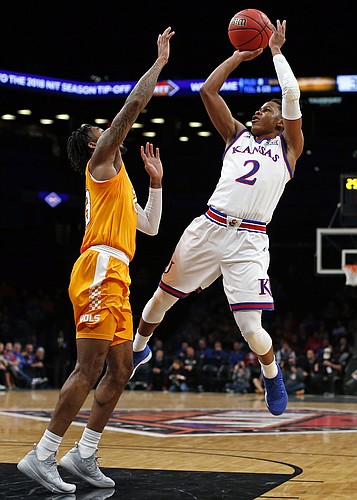 As is now tradition, Lagerald Vick (15 points) opened the game by knocking down a 3-pointer. But the Jayhawks didn’t rely too heavily on their long range looks.

It wasn’t always pretty, and Tennessee’s interior defense at times made it downright difficult, but KU made sure to get the ball inside as often as it could. By the midway point of the first half, 14 of the Jayhawks’ 18 points had come in the paint. They shot 48 percent in the first half, scoring 22 points inside. By the end of the 45-minute NIT final that went to OT, KU out-scored the Volunteers 48-40 in the paint.

Turnovers plagued much of KU’s opening 20 minutes, though, making it difficult for for the No. 2 team in the country to create any separation, despite a dismal shooting start for the Vols, who missed their first eight 3-point attempts.

Kansas turned the ball over on nine of its first 28 possessions. The Jayhawks finished with nine giveaways in the first half and 16 on the night.

After halftime, KU shot 52% from the floor and turned the ball over seven times.

The Jayhawks finished 22-for-34 on free throws.

Tennessee only made 5 of its first 20 field goals as KU got off to a promising defensive start. Then the Vols settled in. They made 8 of 13 to close the first half, allowing them to enter halftime up 33-31.

KU wasn’t imposing defensively in the first half, but KU limited its top-5 foe to 39.4% shooting before intermission. Mitch Lightfoot provided the team’s only block and Quentin Grimes the only steal before the break.

Tennessee got even more comfortable in the opening minutes of the second half. The Vols had two dunks, two layups and a 3-pointer, allowing them to grow their lead to as many as nine points before the 14:00 mark.

Occasionally Udoka Azubuike (nine points, four turnovers, four rebounds, in 17 minutes) was too tall and powerful for the Volunteers to handle. At other junctures he didn’t look comfortable when Tennessee ran at him with double teams or fronted him in the post. The 7-footer picked up his second personal foul with more than 8 minutes left in the first half, so he only logged 8 first-half minutes, scoring 6 points along the way.

Azubuike got whistled for foul No. 3 in the opening minute of the second half, but Bill Self left Azubuike on the court. The big man then drew his fourth foul with more than 16 minutes left. He fouled out with 4:26 to go in regulation and the game tied at 61, while going after an offensive rebound.

Junior forward Dedric Lawson (24 points, team-best 13 rebounds and five assists) was at his best when asserting himself, scoring three layups in the first half, when he also dished three assists.

With Azubuike hampered by foul issues, Kansas needed Lawson to give the offense some sense of normalcy and confidence down the home stretch. After the junior center fouled out, Lawson’s drive and jump-hook in the paint gave KU a 65-64 lead with 2:50 left.

Lawson missed a difficult, contested 2-point jumper from the right corner at the end of regulation, but more than made up for it in the five-minute overtime period with a tip-in early and a transition jam late the extended KU’s margin to seven.

Day by day, Devon Dotson’s beginning to realize how effective he can be in the open floor. The freshman point guard, within the first five minutes, had pushed to score a layup for himself in transition and get KU another fast-break bucket on a lob to Azubuike.

Dotson (17 points) came through in a big way in the opening minutes of the second half, too, nailing an open 3-pointer from the left corner and taking off after securing a defensive rebound to score another fast-break lay-in. The Jayhawks would have been in serious trouble without his contributions. Dotson scored 10 points in the second half.

A tough drive on a fast break in overtime from the freshman turned into a layup, foul and free throw for Dotson, and pushed KU’s lead to 74-69.

Grimes (five points, four rebounds) looked disappointed in his play a few times, with a 1-for-4 shooting night and an occasional defensive lapse, such as overpursuing on a denial, allowing Admiral Schofield (21 points) to easily cut backdoor for a layup.

Vick went through much of the night ineffective on offense, after his early 3-pointer. But he tied the game at 56 with 7:24 left after missing his previous three from deep. That ignited the senior guard from Memphis and he hit a go-ahead 3-pointer to give KU a 59-56 lead at the 6:47 mark. The lead grew to five when Vick drained another jumper, this one a 2-pointer, on the next trip down the floor.

In crunch time, Vick drove in from the top of the key for a go-ahead layup, 67-66. In overtime, he threw a lob to Lawson off a pick and roll for a five-point Kansas lead.

Down their sixth man, Marcus Garrett, who was kept out of the lineup due to concussion-like symptoms, the Jayhawks didn’t have the support of their most reliable reserve.

In Garrett’s absence, Charlie Moore provided KU with some offensive punch in the first half, scoring seven points off the bench — putting in two high-degree-of-difficulty baskets off drives and hitting an open 3-pointer.

With KU in the midst of a brutal start to the second half, Moore (nine points, two assists) tracked down a long defensive rebound and alertly pitched the ball ahead to Dotson for a layup that cut UT’s lead to four with more than 12 minutes to go.

K.J. Lawson scored eight off the bench and pulled down six rebounds. His steal with 1:30 remaining set up a transition opportunity for KU, and Moore drew the fifth foul on Williams before making two free throws to tie the game at 69.

The other Lawson brother, K.J. also secured a key defensive board in the final minute. On the ensuing possession, he drove and missed, but secured a critical offensive rebound of his own miss.

His activity on the offensive glass extended a possession in overtime, as well, eventually allowing KU to score a second-chance basket when his brother, Dedric, tipped in another miss for a 71-69 KU lead.

Our guards need to watch this game again. Our TOs > Asst, go figure. UT bigs played well together. Hats off to coach Barnes & his staff.