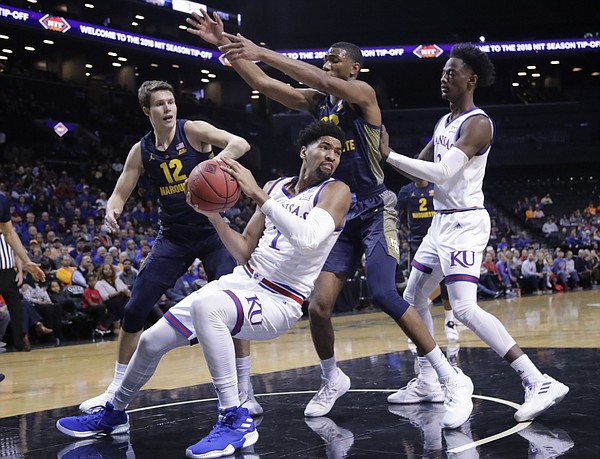 Kansas' Dedric Lawson (1) looks to pass away from Marquette's Matt Heldt (12) and Joey Hauser as teammate Marcus Garrett, right, watches during the first half of an NCAA college basketball game in the NIT Season Tip-Off tournament Wednesday, Nov. 21, 2018, in New York.

Quick grades for five aspects of the Kansas basketball team’s 77-68 win over Marquette Wednesday night at the NIT Season Tip-Off, in Brooklyn, N.Y.

KU trailed 47-38 at halftime and headed to the locker room on the heels of a choppy showing that featured five turnovers and only four assists for the No. 2 team in the country.

Although the Jayhawks shot 48% from the floor in the opening 20 minutes, they played 14 of those without Udoka Azubuike, who picked up his second foul with more than 9 minutes left. Without their 7-footer available in the paint, the offense lacked rhythm and consistency. Lagerald Vick (16 points) came out confident and firing, still feeling it from 3-point range and connecting on each of his first three 3-pointers. Still, Marquette didn’t allow him to really take over.

Whatever Bill Self told his Jayhawks at the break, though, did the trick.

The Jayhawks opened the second half on an incredible 22-0 run, by playing aggressively and scoring 16 of those points in the paint.

KU shot 48.3 percent in the win, which set up a Friday matchup with No. 5 Tennessee.

Entering the game, KU opponents had made 42.9% of their 3-pointers. The Jayhawks’ issues defending the arc continued in New York in the first half.

The man who scored the game’s first basket from downtown, Markus Howard (18 points) knocked in 3 of his first 4 from deep and the Golden Eagles made 5 of their first 8. By the midway point of the first half, Marquette led 23-22, with the help of 7-for-11 3-point shooting.

Things began to flip in the second half, though, and KU’s defense finally began to bother Marquette. The Golden Eagles missed their first 10 field goals and turned the ball over five times before they scored their first points of the half at the 10:45 mark.

The defensive run allowed KU to build a 13-point lead before Marquette finally ended their slump on a Hauser 3-pointer.

The Jayhawks survived, holding Marquette to 41.7-percent shooting overall on a night the Golden Eagles went 14-for-31 (45.2 percent) from long range.

Lawson did well for himself by getting to the free throw line in the first half, but he missed his first 4 shots from the floor. He finally got one to drop on a drive late in the first half and knocked in a 3 from the top of the key just after Marquette took a 12-point lead. His 11 first-half points matched Vick for the team lead.

Azubuike looked massive compared to Marquette’s frontcourt. But that size advantage didn’t do him much good early. The junior big man only contributed 2 points and 1 rebound before intermission, and only played 6 minutes because he got whistled for 2 fouls.

With both Lawson and Azubuike on the floor to open the second half, though, KU began rounding into form. With the bigs leading the way, and often working in tandem offensively, the Jayhawks erased their 9-point halftime deficit with ease.

After, no doubt, hearing from Self and his staff this week about KU needing their guards to attack more, both members of the Jayhawks’ freshman backcourt had willed their way to the rim before the first media timeout.

Quentin Grimes (three points) drove baseline to draw contact and knock in two free throws — but that proved to be one of his few high points.

Soon after, Dotson showed off his balance by collecting a steal while avoiding tumbling in the open floor and keeping his dribble alive, powering his way to the basket for a lay-in. The freshman point guard then replicated the sequence, but looked way more smooth on his second attempt, swiping the ball again. Once again, the possession finished with Dotson seeking out and converting a layup.

As KU got off to a slowish offensive start, with more turnovers than assists, Dotson became the first guard to record an assist with more than 8 minutes left in the first half, on a dish for a David McCormack jam.

However, that assertiveness didn’t characterize most of the first half. Once again, Vick seemed to be KU’s only reliable source of offense on the perimeter, putting up 11 points before intermission on the power of 3-for-3 3-point shooting.

As much of an impact as Lawson and Azubuike had for KU, Dotson proved just as important through KU’s second-half recovery. The freshman guard set the tempo, played beyond his experience and produced 10 points and four assists in the win.

KU didn’t play well in the first half when Marcus Garrett and Charlie Moore were on the floor. It was during those stretches that Marquette was able to build its lead to as many as 12 points.

When Azubuike got in foul trouble before the halftime break, Self again hesitated to use his backup bigs, Mitch Lightfoot and McCormack, as much as he did his reserve guards.