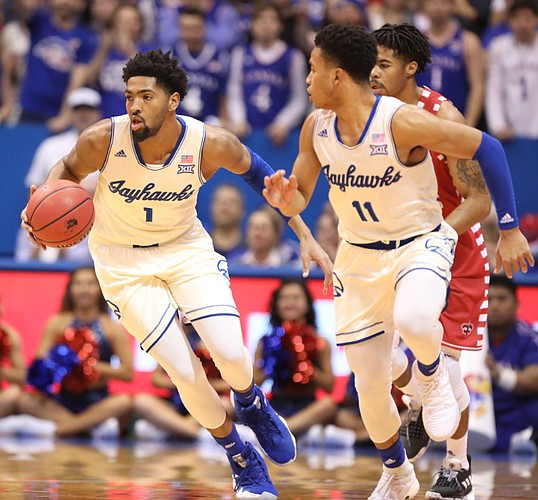 Kansas forward Dedric Lawson (1) comes away with a steal during the first half, Friday, Nov. 16, 2018 at Allen Fieldhouse. by Nick Krug

You figured the Jayhawks were going to have a good night offensively when Dedric Lawson missed a shot, landed on his backside, caught the offensive rebound while still seated on the left side of the paint and just shot it from there for his first official points in Allen Fieldhouse (remember, he went scoreless in the home opener versus Vermont earlier this week.)

But KU missed a lot of quality looks inside, several of them layups, against UL. And basically no one except Lagerald Vick — new career-high 33 points and 7-for-12 3-point shooting — could get a shot from outside to drop.

Take away Vick’s latest downtown display and the rest of the Jayhawks combined to go 1-for-10, with that 1 coming from Quentin Grimes.

In the half court, the offense looked clunky at times, and KU finished with 16 turnovers.

KU did most of its damage inside, with 44 points in the paint, but made just 8 of 22 from 3-point range.

Bill Self called timeout less than seven minutes into this one, when UL junior big Justin Miller (22 points) knocked down a 3-pointer to give him 10 quick points and the Ragin’ Cajuns a 15-all tie with the Jayhawks.

KU’s defensive issues were just getting started at that point, though. The Cajuns would lead by as many as 12 in the first half, as the Jayhawks struggled to defend the 3-point arc early. At other stages before halftime, their transition defense and lack of half-court help got them in trouble.

Those very same issues popped up in the second half, too, allowing Louisiana to stick around much of the night.

The Ragin’ Cajuns were runnin’ too, putting up 23 fastbreak points.

In the opening half, KU didn’t get much of a look at either of its most prominent bigs. Both Udoka Azubuike and Lawson picked up two fouls quickly. Azubuike only played 5 minutes in the first, while Lawson stayed on the floor slightly longer, with 9 minutes logged before the break.

In their absence, though, KU was able to at least remain competitive on the glass, as freshman David McCormack snagged 6 rebounds and KU out-rebounded the visitors 23-18 in the first 20 minutes on 5-for-8 shooting (4-for-7 3-pointers).

With Lawson and Azubuike back in the mix in the second half, the Jayhawks eventually looked more like a top-five-ranked team. Lawson provided 19 points, 6 rebounds and 3 assists.

Able to dominate in the paint once KU got him involved in the second half, Azubuike finished with 17 points and 8 rebounds, as well as 4 blocks.

Apparently The Lagerald Vick Show was not a one-night-only affair this week. Vick didn’t hit every single 3-pointer he hoisted this time, but he still was the only consistent source of offense for Kansas in the first half, when he put up 18 points on 5-for-8 shooting.

Vick led KU in scoring once again, this time finishing with 33 points to go with his 9 rebounds.

Neither of KU’s starting freshmen guards ever got going offensively. Devon Dotson (4 points) went 2-for-6 and Quentin Grimes (6 points) shot 2-for-7.

Sophomore guard Marcus Garrett brought his typically steady floor game to the fieldhouse. Garrett’s awareness, defense and passing (5 assists) more than made up for his lack of scoring (6 points on 1-for-3 shooting).

McCormack provided some crucial first-half minutes, too, with Azubuike and Lawson sitting due to foul trouble. The freshman big man played with energy, getting after the offensive glass (4 offensive rebounds) in 10 minutes.

Charlie Moore struggled with his shot, finishing 0-for-5.