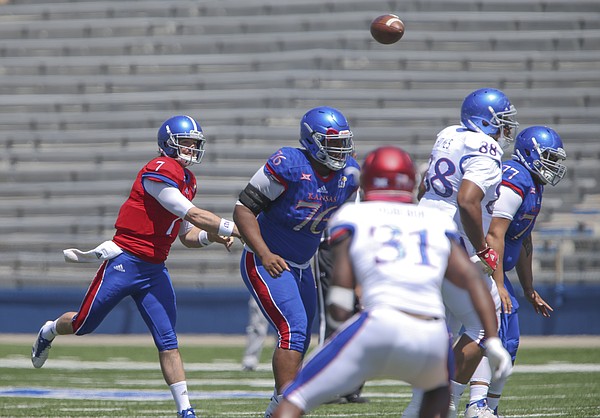 Spring football came and went in Lawrence without anyone knowing for sure who will open the 2018 season as the starting quarterback at Kansas. But if forced today to take a stab at the winner of the competition nearly four months ahead of the Jayhawks’ season opener, the safest bet would be senior Peyton Bender.

So even though some KU football supporters might think new sophomore QB Miles Kendrick or redshirt junior Carter Stanley would be better suited for the job, it shouldn’t come as too much of a surprise, given the unpredictability of the battle, that Athlon Sports rolled with Bender when ranking the top starting quarterbacks in FBS.

A 6-foot-1 senior who began his college career at Washington State and played at Itawamba Community College (Miss.) one season before transferring to Kansas, Bender started eight games and threw for 1,609 yards (20th all-time at KU), 10 touchdowns and 10 interceptions, while completing 54.2 percent of his 273 throws in 2017. Those numbers landed Bender at No. 108 out of 130 passers on the list.

“The Jayhawks have finished last in the Big 12 in scoring offense for eight consecutive seasons,” Steven Lassan wrote for Athlon. “Without better play under center in 2018, that streak is likely to extend to nine.”

Bender didn’t finish last among Power Five quarterbacks. That unflattering distinction went to Illinois’ Cam Thomas (116th). Another Big Ten QB, who happens to be on KU’s schedule this fall, Rutgers’ Artur Sitkowski (110th) also ranked behind Bender. The only other QB from a power conference lower than Bender was Oregon State’s Jake Luton (109th).

While Bender registered closer to 130th-ranked Kilton Anderson of Coastal Carolina, one of his Big 12 peers, West Virginia senior Will Grier, is Athlon’s No. 1 QB in the country.

Although Bender experienced enough turmoil in his debut season with KU that he lost the starting job seven games into 2017, Stanley didn’t show enough to win the gig for himself entering the off-season, and Kansas brought in sophomore junior college transfer Kendrick to enter the fray this spring.

The battle to become KU’s starting QB could very well continue through the week of preparation leading up to the team’s Sept. 1 opener versus Nicholls State. Bender didn’t do well during his junior year when the offensive line broke down, so if the coaching staff envisions such scenarios becoming commonplace again in 2018, Bender might not end up starting.

But if head coach David Beaty and offensive coordinator Doug Meacham see enough promise and improvement up front from O-line coach A.J. Ricker’s group, it could become Bender’s job to lose. A fifth-year player — he took a redshirt his first season at WSU, in 2014 — Bender has studied and made throws in some version or other of the Air Raid longer than Stanley or Kendrick. Plus, Bender projects as the most consistent downfield passer.

If Kansas can find a way to balance its offense by featuring Khalil Herbert, Dom Williams and Pooka Williams in the run game, it might help the offense play to Bender’s strengths and make him a more effective QB.

Of course, all of those best-case scenarios hinge on the success of the offensive line, which lost center Mesa Ribordy to retirement this off-season.

Pretty sure Bender will be the starter this upcoming season. And then we'll likely do the same musical chairs routine we did last year.

If you have three QBs that means you don't have any.

I would like to see Miles get the job. He brings a lot more to the table even if his arm isn't as strong as Benders. We'll need a guy that can move around and make a lot of plays on his feet and that's what Miles can do. I wrote a little bit about what we could expect from him if he did start or at least if he gets a chance to at some point in the season.

Marcus - I would suggest that if you're recruiting a third QB when you have 2 with starting experience you didn't have any to begin with which is a big chunk of our problem.

I was really hoping Miles would have been more competitive than shown in the Spring non-game but he was 10% (?) behind the competition. It is a long ways to September and things could really change when the QBs become live but for now Bender is the leading candidate.

If Bender (and Willis) was playing behind a more established offensive line, their passing percentages would probably have been much higher. I noticed in Bender's early season games that I attended and on TV that he rushes his throws when his protection starts to breakdown and his throws end off target. Bender will most likely start the season and if he's ineffective, he be replaced by Stanley and then Miles. Hopefully OL Coach Riker will have a much better opportunity developing in a Big 12 caliber offensive line with upper class linemen than his predecessor.