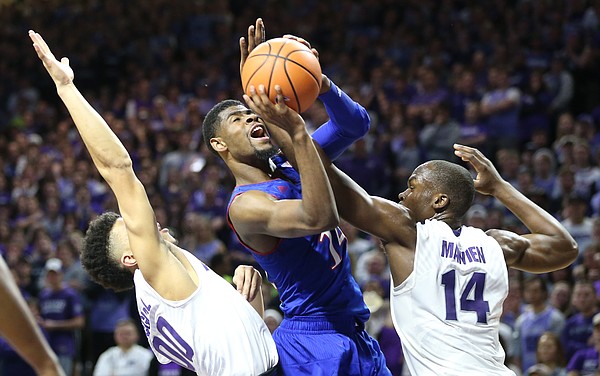 Kansas guard Malik Newman (14) gets a shot off as he is fouled by Kansas State forward Makol Mawien (14) during the second half, Monday, Jan. 29, 2018 at Bramlage Coliseum in Manhattan, Kan. At left is Kansas State guard Mike McGuirl (00). by Nick Krug

Less than two weeks ago Kansas basketball coach Bill Self, while discussing a recent uptick in Malik Newman’s play, stated how proud he was of the starting guard’s progress.

The sophomore transfer from Mississippi State was coming off one of his best offensive showings as a Jayhawk, going for 20 points and 5 assists in a rout of Oklahoma. It was Newman’s third time posting at least 20 points and ninth time in double figures over a stretch of 10 games.

Even more encouraging, the 6-foot-3 guard from Jackson, Miss., looked better handling the ball. Newman had shown he could be more than a spot-up 3-point shooter by driving to the paint to either draw contact, score or set up teammates. In a five-game span that concluded with the OU game on Feb. 19, Newman averaged 4.2 assists and 0.6 turnovers — far better than his current season averages of 2.1 assists and 1.5 turnovers.

While Self appreciates the headway Newman has made to become a more complete player than what he showed back in the non-conference portion of the schedule and Self is happy the shooting guard won the Big 12’s Newcomer of the Year award, KU’s coach is hoping for a Newman resurgence with the postseason’s arrival.

In the Jayhawks’ final three games of the regular season, Newman, who is supposed to complement Big 12 Player of the Year Devonte’ Graham in the backcourt, didn’t always deliver on his potential, and his numbers began trending in the wrong direction.

At Texas Tech, Newman was solid, with 12 points and 5 defensive rebounds, but he made just 1 assist (in the first half) — his lowest ball distribution total in three weeks — and committed 1 turnover. Against Texas in KU’s home finale, Newman provided 9 points, 4 defensive boards and 1 assist, with 1 turnover. He bottomed out in the Jayhawks’ loss at Oklahoma State, with 7 points, 3 defensive rebounds, 0 assists and 3 cough-ups.

After averaging 4.2 free-throw attempts a game in the previous 12 contests, Newman didn’t get to the foul line once in his final two games of the regular season.

Newman needs to revive the versatility that made him so valuable in late January and most of February now that it’s March. Newman has stated a number of times how important it is for he and other Jayhawks to help take some of the burden off Graham’s shoulders.

If Newman wants to make that happen on a regular basis in the weeks ahead, he can just recall some of Graham’s advice. The senior point guard said when Newman was at his best recently it was all about taking an assertive approach on offense and trying to reach the paint off the bounce.

“I keep telling him that,” Graham related. “Just look to score. Don’t worry about nothing else. Because once you start thinking you just get all messed up. So just look to score, be aggressive on the offensive end and it just takes care of itself.” 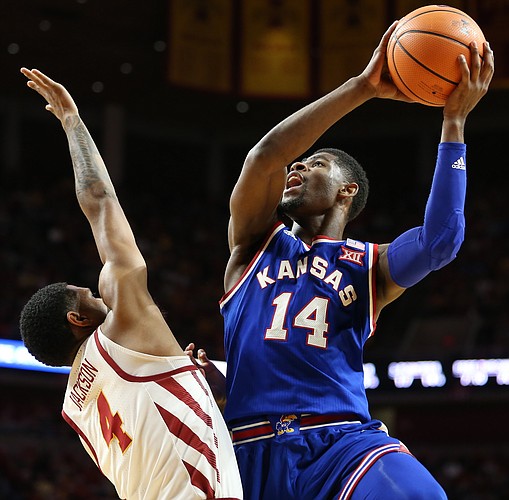 Kansas guard Malik Newman (14) puts up a shot after a foul from Iowa State guard Donovan Jackson (4) during the first half, Tuesday, Feb. 13, 2018 at Hilton Coliseum in Ames, Iowa. by Nick Krug

Just more than half of Newman’s shot attempts this season have come from behind the arc. A 36.9% 3-point shooter on the year (37.5% in Big 12 action), spotting up isn’t always Newman’s best play. When he is more diverse with the ball in his hands, it tends to benefit both him and his teammates.

Plus, Self wants Newman contributing in less trackable manners. As you might expect, those areas where the coach would like to see more consistency directly tie to relieving Graham of some of his duties. KU’s 15th-year coach finds himself examining what Newman does on a game-by-game basis to help Graham.

“I’d love to see Malik be able to say, ‘I want to guard the other team's best perimeter player.’ I would love to see us be able to initiate offense with Malik, so Devonte' doesn't have to,” Self said. “And those don't have anything to do with stats, but those are things that would help our team a tremendous amount. He's shown he can do that, but I think he can be more consistent with that.”

Newman’s first crack at a late-season renaissance comes Thursday in Kansas City, Mo., when the top-seeded Jayhawks face either Oklahoma or Oklahoma State.

I'm confused, is it a Malik Newman resurgence we are needing to succeed in the postseason or a LaGerald Vick resurgence?

Yes and Yes. You need all players operating at peak form to be a championship caliber team. It is never an either/or. Luckily, we have had a few games where this has occurred. And sadly, quite a few where it hasn't.

Not only Malik, but any guards who can penetrate always have an option to just throw the ball when the bigs left open. Something that our guards need to take advantage of, other than Graham. That instinct is really needed to increase our scoring. Lots of times, our guards push the ball and force to the basket even though Dok is ready to slam wide open. Hopefully, we will watch this team play together as a team that's hard to beat, all the way. Go Jayhawk!!

"Even more encouraging, the 6-foot-3 guard from Jackson, Miss., looked handling the ball."

Looked smooth? Looked comfortable? Looked good? It would be nice to know what you were trying to say there.

Looked good, it should have read. Thanks.

I hope this has the same effect that Tom Keegan's story had on Newman earlier in the year! Awesome player and we play so well when he is on.

I would say that he was resurgent this afternoon.