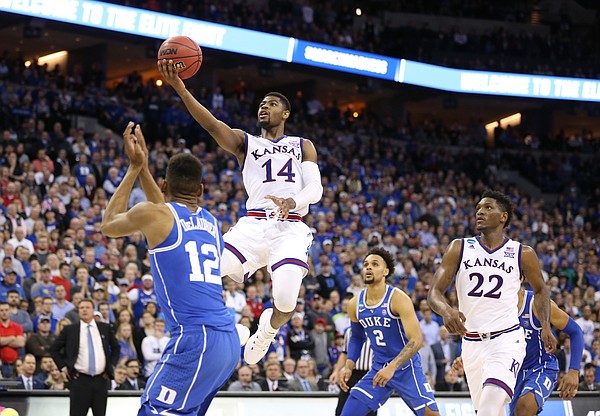 Kansas guard Malik Newman (14) floats in to the bucket against Duke forward Javin DeLaurier (12) during the second half, Sunday, March 25, 2018 at CenturyLink Center in Omaha, Neb. by Nick Krug

San Antonio — One of the breakout stars of March Madness, Malik Newman picked up his second Most Outstanding Player award of the postseason in the aftermath of an Elite Eight victory over Duke.

After emerging as the top performer of the Big 12 tournament a few weeks earlier, the Kansas sophomore proved his Sprint Center shows were no fluke once the Jayhawks began their Final Four run.

Through four KU victories in the NCAA Tournament, Newman leads the team with 21.8 points per game and 13-for-29 shooting (44.8%) from 3-point range.

Earlier this week, Newman joined the March Madness 365 podcast, with Andy Katz, to discuss his dazzling March and how his KU coaches and teammates helped him took off.

“My confidence is at an all-time high right now. I probably feel as confident as I’ve ever felt,” Newman told Katz. “I’m having fun with the group of guys that I’m with and we’re just enjoying the moment.”

A McDonald’s All-American in high school and considered one of the top talents in the class of 2015, Newman began his college career at Mississippi State, where he experienced a 14-17 freshman season before taking a crack at the NBA combine while maintaining his amateur status. Eventually, he decided to transfer to Kansas.

Needless to say, the 6-foot-3 guard from Jackson, Miss., had never experienced anything quite like KU’s overtime win against Duke in the Elite Eight. Newman, of course, scored all 13 of KU’s points in OT, en route to a career-high 32. The fact that it came in a “historical matchup” between blue blood programs, he added, made it all the more satisfying.

“It’s got to be at the top of the list. Most definitely at the top of the list,” Newman replied, when asked where that game ranks for him. “As a kid, this is what you dream about. The AAU circuits and all the AAU games that you play, it will never amount to playing in the Elite Eight game and advancing to the Final Four.” 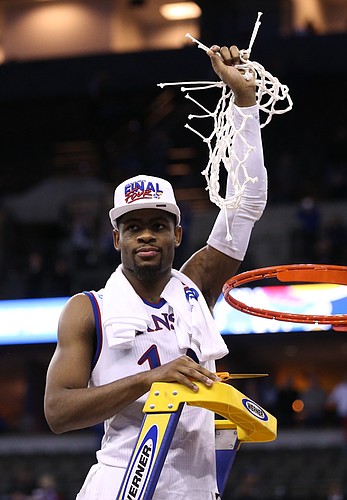 Who knows what Newman would be doing now if he had just turned pro after leaving Mississippi State two years ago. He said he had to “get healthy” and “learn the game some more,” instead of trying to work his way into the NBA while playing in less glamorous leagues. Newman is glad he ended up with Bill Self and his coaching staff at Kansas.

Now Newman is preparing for a Final Four semifinal against Villanova as a far better player than he was two years ago. Sitting out a full season as a transfer, it turned out, had its benefits, as he got to watch and practice against Frank Mason III, Josh Jackson and Devonte’ Graham.

“Those guys are skilled players, so I was able to steal some things from them,” Newman said. “And Coach Self, he just did a great job of instilling the Kansas tradition in me. I think it just made me better overall.”

All high school recruits and transfers, pay attention as Coach Bill Self and Company can take your game to another level. Frank Mason and Devonte should be proof enough!!!! IF you're not a winner, don't apply.