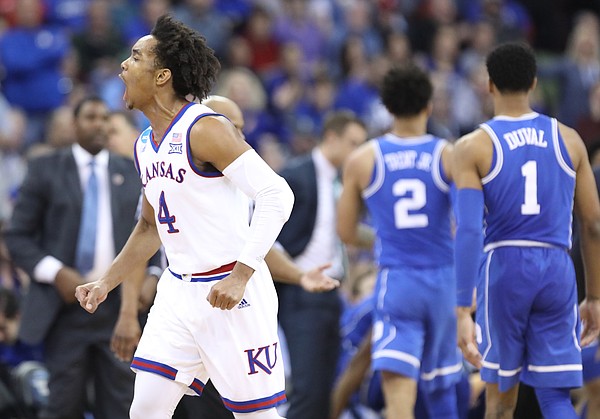 Kansas guard Devonte' Graham (4) celebrates a Jayhawk run during the second half, Sunday, March 25, 2018 at CenturyLink Center in Omaha, Neb. by Nick Krug

The Kansas basketball season isn’t over yet.

The Jayhawks advanced out of the NCAA Tournament’s Midwest region and on to San Antonio by knocking off Duke, in overtime, 85-81, Sunday night.

“Mr. March,” also known as Malik Newman, had plenty to do with KU’s 31st and most memorable victory of the year so far, scoring all 13 of his team’s points in OT.

But the efforts of Newman’s teammates in various other categories proved just as valuable. Here are five statistics that made the Jayhawks’ 15th Final Four appearance, and first since 2012, possible.

Given KU’s one-big, four-guard lineup and the presence of two potential NBA lottery picks in Duke’s starting frontcourt, it seemed a long night of Marvin Bagley III and Wendell Carter Jr. snagging Blue Devils misses could be in the cards for Kansas.

KU had come up short in second-chance points in four of its first six postseason victories before outscoring Duke, 15-11, with the help of 17 offensive boards.

Guards Svi Mykhailiuk (3 offensive rebounds), Devonte’ Graham (2), Newman (2) and Marcus Garrett (2) all chipped in when they could, as well. 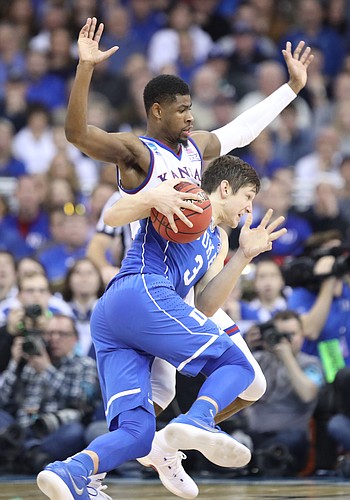 Whether it was KU locking in, Duke’s legs wearing down or some combination of the two, the Jayhawks spent the final minutes of regulation making stops.

After Grayson Allen fed Wendell Carter Jr. for a layup with 4:25 to go in the second half, KU held Duke without a basket and forced a turnover in the final four minutes, setting up overtime.

Although Allen made two free throws at the 1:59 and 1:25 marks, Kansas barely out-scored Duke, 5-4, during the closing minutes of the second half.

Lagerald Vick blocked Carter with 3:51 on the clock. Azubuike rebounded a missed 3 by Allen with 3:23 left. Trevon Duval turned the ball over at the 2:40 mark. Silvio De Sousa rebounded a Carter misfire with 36 seconds to go in regulation. And KU’s March breakout star, Newman, successfully defended a potential Allen game-winner with 0:03 showing on the clock. 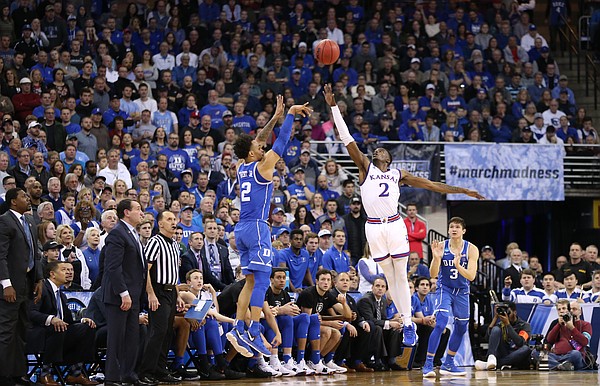 Duke guard Gary Trent Jr. (2) puts up a three over Kansas guard Lagerald Vick (2) during the second half, Sunday, March 25, 2018 at CenturyLink Center in Omaha, Neb. by Nick Krug

The Jayhawks’ perimeter defenders made sure neither Allen (2 of 9 on 3’s versus KU) or Trent (2 of 10) got hot or found a rhythm.

With the Devils’ marksmen combining to hit just 21% of their 3-pointers, Duke only made 7 of 29 (24%) as a team — the lowest percentage by a KU opponent in the NCAA Tournament this March. 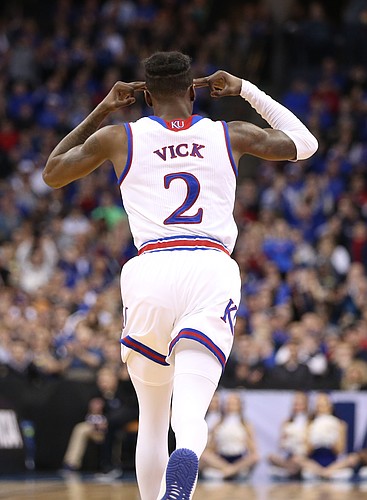 Kansas guard Lagerald Vick (2) celebrates a three during the second half, Sunday, March 25, 2018 at CenturyLink Center in Omaha, Neb. by Nick Krug

A season-long ally for the Jayhawks, the 3-point line once again facilitated a Kansas victory.

It wasn’t KU’s 36% success from beyond the arc that made the difference. It was that 39 points (nearly half of the victor’s 85) came from that source.

Kansas hit 13 of 36 from deep between its four starting guards, giving the team 13 or more 3-pointers for the eighth time this season and 10 or more for the 19th occasion in 38 outings.

The Jayhawks out-scored Duke by 18 points from outside the arc, and improved to 17-2 when connecting on at least 10 3-pointers.

Newman went 5 for 12. Mykhailiuk sent the game to OT with a 3-pointer in the final 30 seconds of regulation and made 3 of 9. Graham hit 3 of 8. Vick made at least two from deep for the fifth straight game, connecting on 2 of 7. 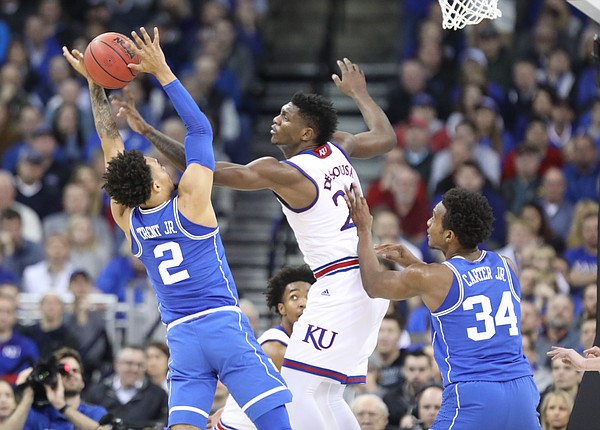 Where would the Jayhawkw be without freshman big man De Sousa right now? Maybe done for the season, instead of packing up for a trip to San Antonio.

With starting center Azubuike battling foul trouble all night — he picked up his fifth and a disqualification with 1:59 to play in the second half — KU needed every minute, rebound, hustle play and defensive stop De Sousa could muster. http://www2.kusports.com/news/2018/ma...

A 6-foot-9 freshman from Angola, De Sousa tied a career high with 26 minutes — the same time he spent on the court in the Big 12 title game, when Azubuike was out with an injury.

The backup big, whom Bill Self barely trusted to keep on the floor in January and February, finished with 4 points, 10 rebounds, 1 assist and 1 block.

After Azubuike fouled out during crunch time, with the season on the line, De Sousa finished off three separate KU stops with a defensive rebound. 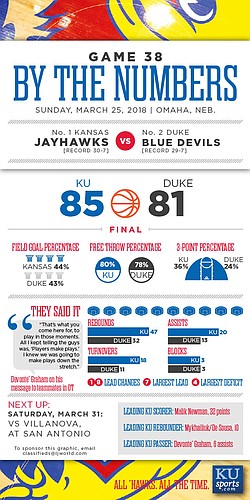