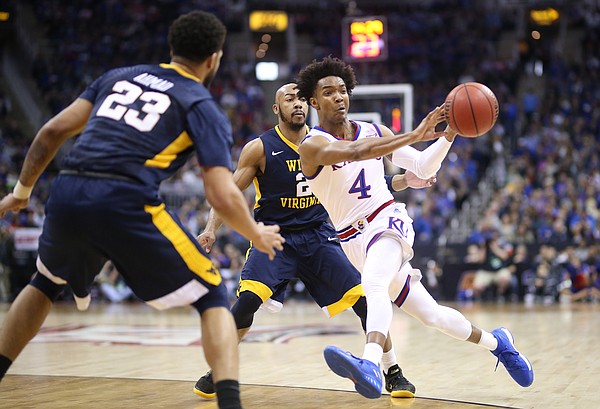 The offensive lifeblood of a four-guard lineup, 3-pointers — sometimes just the mere threat of them — space the floor for Kansas, give 7-footer Udoka Azubuike space to dominate on touches in the paint and have helped make a third consecutive trip to the Sweet 16 possible.

Of their 81.4 points per game this year, the Jayhawks average 30.1 from behind the arc (22nd in Division I). In other words, their opponents know KU’s guards would like nothing more than to drown them in a deluge of 3-pointers.

With foes doing everything within their powers to limit one of this Kansas team’s most effective weapons, timing and precision are vital for getting the best look at the basket possible while rising up from long range. Within an offense that revolves around ball screens, dribble hand-offs and drive-and-kicks it sure helps to have senior point guard Devonte’ Graham penetrating and distributing.

Among the 16 teams still alive in the NCAA Tournament, Graham’s 7.5 assists per game on the season lead all players. While plenty of those dimes come on fast breaks or alley-oops for KU bigs, the guards who play alongside Graham are thankful his kick-out passes allow them to consistently catch and shoot in one fluid motion.

So what percentage of Graham’s deliveries to 3-point shooters are perfect?

Junior Lagerald Vick briefly paused to calculate before responding, with a grin: “I would say about 99.7 of those are right on the money. I definitely think he’s a good passer, especially off penetration and kick.”

A more generous grader, senior Svi Mykhailiuk went ahead and gave Graham a 100.

“I think every time,” Mykhailiuk said. “He knows where I’m going to be and he just passes to me and I’m gonna make a shot.” 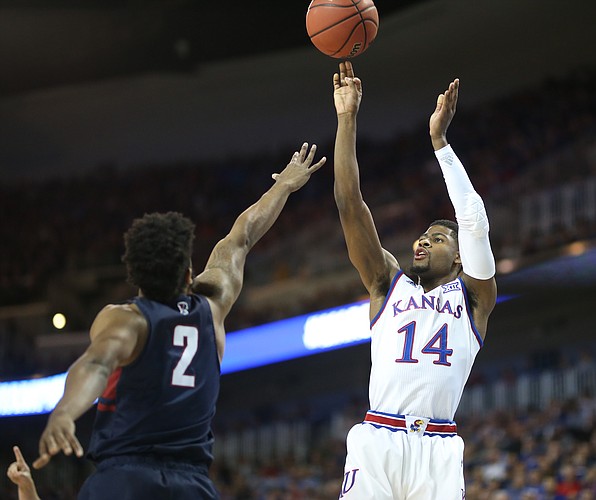 Kansas guard Malik Newman (14) puts up a three from the corner over Penn guard Antonio Woods (2) during the first half, Thursday, March 15, 2018 at Intrust Bank Arena in Wichita, Kan. by Nick Krug

In KU’s second-round victory over Seton Hall, Graham didn’t have his typical shooting touch, but he assisted on 4 of his team’s 9 successful 3-pointers.

Two days earlier, the Jayhawks only made 7 from deep while defeating Penn. Graham assisted on three and made two 3-pointers.

Per Synergy Sports, Kansas has averaged 17.76 points in its first two NCAA Tournament victories off Graham assists alone — 2.4 points for every dish that sets up a basket.

Here's a quick look at the most prolific guards in the NCAA Tournament in points scored or assisted per game. #MarchMadness pic.twitter.com/mT2Ofk1pCF

None by Synergy Sports Tech

Playing to his roster’s strengths, coach Bill Self has the Jayhawks (29-7) run a lot of ball-screen offense. While Graham is a strong 3-point shooter (his 40.4% accuracy ranks 60th in the country), it often falls on the lead guard to make sure senior Mykhailiuk (45.5%, 10th nationally), sophomore Malik Newman (40.9%) and Vick (37.8%) get the ball in advantageous situations once he begins attacking off the dribble.

“You’ve got to make the defense commit to you and I’ve got to find my guys for open shots,” Graham said.

Occasionally, every step of the process comes easily. On one possession against Penn, Graham turned the corner off a Mitch Lightfoot ball screen, drove to the paint and hit Vick, spotting up nearby in the right corner, for a perfect look.

Other times, Graham has to get more crafty.

In one second-half sequence versus Seton Hall, Graham dribbled left off a pick from Azubuike, drawing the attention of four Pirates defenders as he made his way into the paint. Their resulting rotation accounted for Vick in the right corner, which is where his opponents assumed Graham would look.

Instead he bounced a pass through a gap in the defense, all the way out to the right wing for a wide-open Newman 3-pointer.

Of course, Graham knows how to set up teammates for 3-pointers in every way imaginable.

While facing Penn, Graham misfired on a floater he released in the paint. When the ball rimmed out and found its way back to his hands for an offensive rebound, a little court awareness and quick improvisation paid off.

Graham knew where Vick was when he released his shot, so he easily kicked the ball out to his teammate near the left corner upon securing the rebound. Making the best of his circumstances, the point guard’s hustle set up an easy 3-pointer.

“He’s been a pretty good passer since I’ve known him, even when I came my freshman year when he was at the 2,” Vick said, referring to Graham’s days playing with Frank Mason III. “He’s a good passer.”

Graham’s recognition and vision prove valuable in transition, as well. Off a defensive rebound against Seton Hall, with nine players in front of him on the court, Graham knew KU had the spacing on the break for Newman to get an open 3-pointer on the left wing.

The senior point guard also trusted the shot would drop, raising his hands into the air to signal a successful 3 as Newman went into his shooting motion.

Graham’s familiarity with his fellow guards leads to such trust — as well as to so many accurate passes.

“Just playing with them, game experience, knowing where they like the ball at,” Graham said of how his passes so often generate 3-pointers, “and just tying to get it to them where they can just catch and shoot it before the defense goes out.”

Ahead of Friday’s Sweet 16 showdown with Clemson, in Omaha, Neb. (6:07 p.m., CBS), Vick, Mykhailiuk and Newman have combined to make 13 of 26 3-pointers in the tournament. Vick said their confidence as shooters is growing as a result, “especially with the big fella (Azubuike) back.”

Although Graham missed all four of his 3-point tries against Seton Hall after making 3 of 8 in the first round, his fellow guards have him to thank for much of their offensive impact.

“I would just say he knows how to play,” Mykhailiuk said, “and knows how to pass. He’s been doing this his whole life, so I guess he’s pretty good at it.”

He is absolutely by far the best facilitator that we've had since Miles and he's more dangerous than Miles because he's so good shooting and finishing.

As for Mason, Frank was a better finisher and a more efficient scorer because he drew so many fouls and also he took more uncontested threes because of the presence of Josh Jackson, Graham and Svi. Graham is a better shooter but he shoots a lower percentage on 3s because we rely on him shooting a lot more contested threes and creating his own shot from long range.

One thing though that sets Graham apart is that he's also the vocal leader of this team and he's such a charismatic teammate that he really brings everyone together.

He's everything that you want in a PG and I think that he's climbing everyone's draft boards right now.

As far as an NBA comparison. I like Jason Terry. He's a guy who is vocal and leads, he can score, he facilitates and makes teammates better, he's not the focal point of the offense but he'll make you pay if you don't guard him, he has the potential to be a really good player for a really long time because he doesn't rely of extreme athleticism to do what he does, and when he's in the game everyone else can kinda relax because they know that he's gonna control the ball and make smart plays.

Frank was better at rubbing off of a screen and launching a 3 from 22 feet if his man didn't fight through that. A lot of times that was Josh screening, and Josh would release to the basket if there was any hang-up with the defenders - so some of that is personnel that we don't have this year. I think Coach Self is more about spacing on the perimeter this season. We will eat any team alive that doesn't disrupt our whipping the ball around the perimeter. If you go back to our mid-major blowouts in Nov./Dec., that is largely what was happening. And if you track our guards while Devonte is penetrating, they are looking to keep passing lanes open and staying spaced from the other 2 perimeter guards. Which is to say... it's a different offense this season and a bit of apples vs. oranges comparing Frank and Devonte's senior seasons. Azabuike vs. Lucas is a big difference as well -- you just can't cheat off of Azabuike on penetrations because he will dunk it or get a high-percentage shot.

I agree, I almost mentioned how good Frank was and taking a 3 off of the ball screen if the defender went under, but I decided to leave it at uncontested threes, because most of the time if the defender went under Frank would get an uncontested look. Either way, at his size and with a little bit slower release than Graham he had to be more selective of his shots, and their attempts numbers illustrate that.

A little late with the comment, but have to give applause to both Jonathan and Brian. Your in depth viewpoints are perfectly stated in response to an outstanding article.