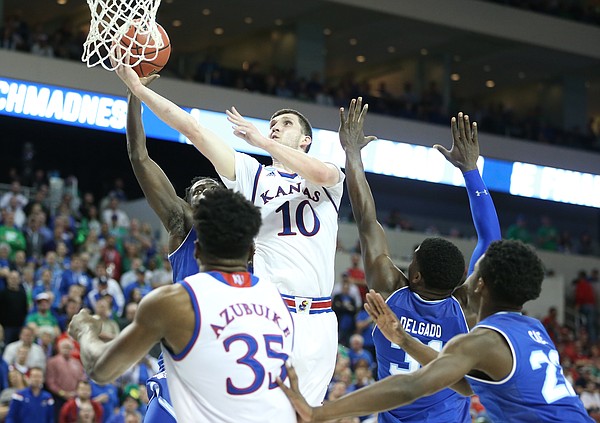 Kansas guard Sviatoslav Mykhailiuk (10) soars in to the bucket during the first half, Saturday, March 17, 2018 in Wichita, Kan. by Nick Krug

Not even Naismith Award finalists can do it all every single night.

When Kansas star guard Devonte’ Graham’s shots weren’t falling in the second round of the NCAA Tournament, the Jayhawks knew they could look elsewhere and find the scoring they needed to survive.

After Graham knocked down a jumper in the opening minutes Saturday night versus Seton Hall, not one of the six field-goal attempts that followed would drop for KU’s leading scorer.

No big deal. The other three guards in the starting lineup had their floor general’s back. Graham may have only provided eight points, but sophomore Malik Newman, senior Svi Mykhailiuk and junior Lagerald Vick combined for 57 as Kansas advanced to the Sweet 16.

“That’s what we do,” Graham, who averages 17.4 points a game, said matter-of-factly following the fourth single-digit scoring outing of his senior season. “If somebody’s having an off night, somebody’s got to step up, and they did a good job of knocking down shots and being aggressive.”

During a nine-assist night for Graham, he liked the way fellow senior Mykhailiuk (7-for-16 shooting, 2 of 5 on 3-pointers, 16 points, three assists) kept getting to the paint and making plays.

In the final four minutes of the victory that moved top-seeded Kansas on to the Midwest regional semifinals, it was Newman (8-of-14 shooting, 4 of 8 from 3-point range, 28 points, two assists) hitting a must-have 3-pointer, going 8 of 8 at the foul line and finding Mykhailiuk for a clutch 3-pointer that stretched the lead to eight with 1:20 to go. 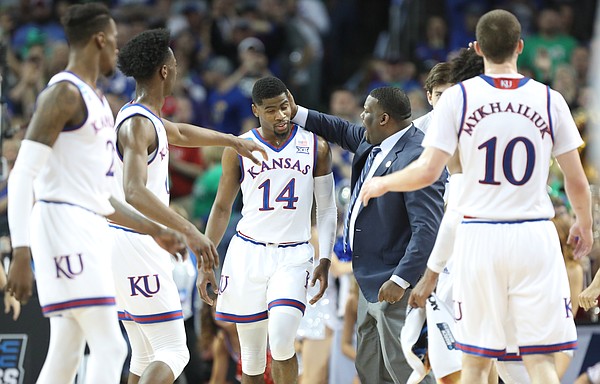 Kansas guard Malik Newman (14) gets a congratulatory pat on the head from assistant coach Jerrance Howard after a late three-pointer during the first half, Saturday, March 17, 2018 in Wichita, Kan. by Nick Krug

“Everybody was just being aggressive and being a threat,” Graham said proudly.

Following his fifth straight double-digit scoring game, Vick (5-for-9 shooting, 3 of 4 on 3-pointers, 13 points) echoed the point guard’s reference to an assertive backcourt approach. The 6-foot-5 junior from Memphis scored eight points in a row for Kansas during a 2:09 stretch of the second half.

“We just, all us guards had a talk. We’re the head of the team so we knew everybody had to step up and make plays for each other,” Vick said. “We all just played off each other and were bringing energy.”

Even though Graham went from the 7:57 mark of the first half until the 7:52 mark in the second half without scoring a point for Kansas (29-7), Mykhailiuk said his four-year teammate’s floor game kept Graham as an essential component of KU’s success.

“If he’s on the court he just gives us confidence. He just controls the tempo of the game. He’s a point guard, so he doesn’t need to score, he doesn’t need to get assists,” Mykhailiuk added. “He just needs to do what he does and tell us what to do.” 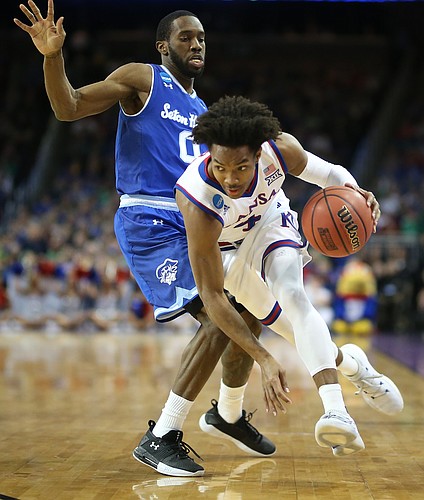 During the regular season, a low-scoring game from Graham only cost KU a victory once — Dec. 6, when he shot 1 of 8 and scored three points against Washington’s 2-3 zone in a 74-65 defeat. The Jayhawks rolled against South Dakota State in November, when Graham finished with eight points, and they won an SEC-Big 12 Challenge encounter at Allen Fieldhouse with Texas A&M, when Graham’s 2-for-11 shooting left him with eight points.

Every aspect of the regular season prepares college basketball teams for the madness that awaits in March — even if those lessons don’t seem helpful at the time.

As Kansas moves on to Omaha, Neb., for a Friday matchup with Clemson (25-9), Graham’s teammates aren’t exactly worried about his scoring output moving forward. And if they need to pick up the slack in the points column, they won’t have any reason to panic.

“He still did good,” Mykhailiuk said of the team leader’s uncharacteristic showing in the second round. “He did all he could, and sometimes shots are just not falling down. So it’s a part of the game. I bet he’s gonna play better next time.”

Graham followed his three regular-season single-digit scoring games with 17 points against Texas Southern in a home win, 19 points versus Arizona State in a home loss and 16 points in a road victory at Kansas State.

First of all, I'm astounded that we're talking about Championship aspirations for Kansas. Pleasantly surprised, given that this discussion would have been unthinkable sometime in January or February, when Kansas looked like it was coming apart at the seams. Somehow they've pulled it together and have a 10-1 record against the remaining field in the NCAA Tournament.

Here's the rub, however:

NONE of those wins came against ACC foes, and they are the consensus top-conference in the country. Supporting that view is the fact that the ACC now has more teams remaining in the field than any other conference, and Kansas would have to survive two of its best teams in a span of 3 days.

Having said that, here's what it comes to. The National Championship will be won or lost for Kansas THIS weekend. If you beat Clemson and (presumably) Duke, then you've fought and won against the Big12 (the number 2 conference) and the ACC, vanquishing both. The optics for a team to bests both of these conference would have to be the prohibitive favorite to win the Tournament. Yes, the games in the Final Four would still have to be played, obviously; but we're talking about "favorite" status at the moment, and Kansas would have to be the heavy favorite if it wins its next two games.

But again, that 10-1 record was not facing any ACC teams.

Pundits are often wrong. But this article gives a re-seeding of the field, and you'll notice that Duke and Clemson are seeded 2nd and 3rd (resp.), while Kansas is seeded at 10th. Moving beyond Homerism, I DO believe it's true that if the remaining field were re-seeded, both Clemson and Duke should be ahead of Kansas, although I think the gap is much narrower than suggested by the article. Even so, however, if Kansas faced this scenario 10 times, I'd say the number of times they survive would be about 4. We're gonna have to be on our game!

Hopefully, the lack of respect can be used by Coach Self to express the seriousness of the challenge facing his team, and get them to focus. Lots of rest for Udoka. Duke has a pair of twin towers under the basket. May need to practice some 3 around 2 (move Lightfoot to his natural power forward position). Prepare for zone (if we survive Clemson). Get DeSousa dialed in. Make perimeter shots!

No wins against the ACC? You sure? We beat Syracuse who is in the ACC and in the sweet 16.