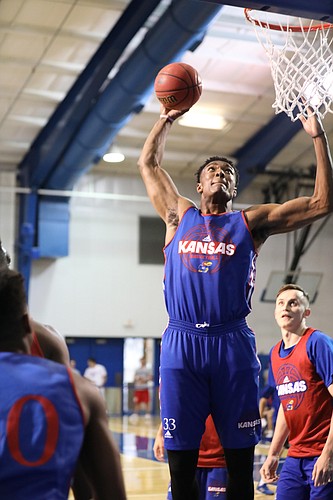 As basketball has evolved into more of a floor-spacing, 3-point-friendly game over the course of the past several years, an increasing number of big men with frames both large and athletic enough to dominate the paint have relocated to the perimeter with the idea being they will better fit into modern offenses.

Six-foot-10 Kansas freshman David McCormack recognizes why some centers and power forwards want to adopt that style of play. But that’s not who he is.

McCormack prides himself on impacting the game with force on the interior.

“I definitely see myself as a classic big or more old school big,” he said. “I’m not one to tend to step out and shoot 3-pointers constantly or things of those sorts.”

Although it was only a glorified pick-up game, played to entertain the hundreds of KU basketball campers in attendance, McCormack performed with power around the basket in an intrasquad scrimmage this past week.

While scoring 18 points, the freshman from prep powerhouse Oak Hill Academy showed off the following:

• a made jumper from beyond the right elbow

• a dribble into a contested baseline jumper from the right side

• a tomahawk slam to finish a fast break

• a layup created by a teammate’s penetration

• a third fierce put-back jam, with two hands, upon meeting a teammate’s missed shot at the rim

While he at times resembles a big man from a bygone era, McCormack made it clear his effectiveness isn’t limited to layups, dunks, offensive rebounds and shots in the paint.

“I know I’m a back-to-the-basket big. But I also have the face-up game and mid-range,” he said.

McCormack, now in his second week of summer workouts at KU, began impressing his new coaches immediately. Assistant Kurtis Townsend said the 260-pound newcomer arrived with his body in great shape. A Bill Self assistant for the past 14 seasons, Townsend said McCormack dunks “everything around the basket,” has good hands, tries to block shots and already looks to be a “really good rebounder.”

A player of McCormack’s stature and four-star pedigree would immediately plug into most starting lineups as a freshman. But KU is so deep up front, with Udoka Azubuike, Dedric Lawson, Silvio De Sousa and Mitch Lightfoot, that the McDonald’s All-American figures to begin his college career as a super-sub.

“He plays with a high motor all the time,” Townsend said. “Sometimes he’s a little sped up, but, boy, if that’s your big guy that comes off the bench after those guys are pounding on Dok, I think he’s gonna be terrific.”

During his first week of workouts, pick-up games and one-on-ones — pretty much any time he was on a basketball court — McCormack said he most often found himself matched up with 6-9 sophomore forward De Sousa.

He’s looking forward to both training alongside and battling against every big in KU’s deep frontcourt.

“This is definitely a different experience with so many well-trained and developed bigs,” McCormack said. “Playing against another high-level athlete constantly with Dedric and Dok and Silvio and Mitch just constantly pushes you to be better.”

McCormack’s approach to the game should compel his teammates, as well, while also pleasing KU’s coaches. He’ll be too intense, mature and impactful to warm the cushy bench seats at Allen Fieldhouse as a freshman.

KU’s newest big man would fit in on a basketball court in any era. Just don’t be too surprised when he takes an old-school style into the 2018-19 season.

reminds me of a young Wayne Simien

hopefully we get to watch him play at KU for 4 years just like Simien as well...if he plays anything like Wayne did, he'll be a huge contributor for this team

I haven't had nearly enough time or videos to make any comparisons. I don't get why we are always/often try to compare incoming players to players from different teams.

I'm not saying you're wrong, maybe you are just better than I am with making comparisons. I like to look at each player individually and without any preconceptions. I just find it simpler.

Will the Chicken Littles soon wonder aloud if it might be wise for him to work on rebounding and shot blocking?

A lot will be determined by minutes played and Self is going to give Udoka every possible chance to work on his game. Udoka has already shown that he is willing to put the time in and I believe he is nowhere near his ceiling.

Dedric Lawson led the AAC with 9.9 reb/g 2 seasons ago, so he would be the safe bet. He has got the instincts and the hands. If Silvio is able to play, he is also a more natural rebounder than Udoka, although probably averaging less minutes.

The answer to whether David fits the modern game will be determined by whether he can defend the perimeter. Regardless of where his O is generated it will be his D that defines how compatible his game is.

Now that he has lost so much weight going from nearly 300 pounds to 240 pounds, he will be much quicker. I agree that defense will be where he gets his minutes or not get minutes.