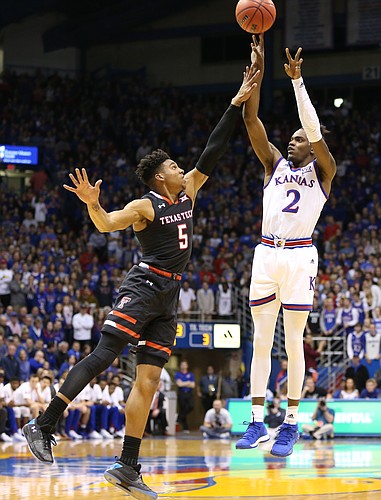 Kansas guard Lagerald Vick (2) puts up a three over Texas Tech guard Justin Gray (5) during the first half, Tuesday, Jan. 2, 2018 at Allen Fieldhouse. by Nick Krug

A domain so welcoming to the Kansas basketball team this season, the territory behind the 3-point line didn’t yield typical results for the Jayhawks in their Big 12 home opener Tuesday night.

Shockingly, after opening the game 6-for-12 from long range, the home team’s final successful 3 of the game came 2:23 before the two teams left the court for halftime. The Jayhawks missed their final 14 3-point tries of the loss, which included an 0-for-12 second half.

Afterward, KU senior guard Devonte’ Graham (27 points, 2-for-8 on 3-pointers) was asked if going 0-for in the final 20 minutes had anything to do with the Red Raiders’ defense.

“Nah, just off shooting basically. I didn’t know we missed all 12, but, yeah, it was just an off shooting night,” Graham replied.

The team’s leader had reason to remain so self-assured. Even after the slump-filled night, Kansas remained ranked 21st nationally in 3-point accuracy (40.9 percent) on the season.

Still, considering No. 10 KU (11-3 overall, 1-1 Big 12) has experienced such ruts before — 8 of 28 versus Kentucky, and 5 of 20 against Washington are the other sub-30 percent performances — and the team relies on 3-pointers as a weapon (see: the Jayhawks’ double-digit makes from downtown in eight games) it seemed worthwhile to look back at the 3-pointers that did and didn’t drop for Kansas in the loss to No. 18 Texas Tech (13-1, 2-0).

Below is a sequential recap of the long-distance misfires and hits (X = miss; √ = make).

X (19:03) — On KU’s opening possession Lagerald Vick settled for a contested step-back 3 from the left wing with the shot clock approaching 5 seconds.

√ (16:54) — Off a baseline out of bounds set, Graham drove into the paint and kicked out to the right corner for a wide-open Svi Mykhailiuk.

X (15:02) — Graham rose up early in the shot clock when given too much space, and just left it short. 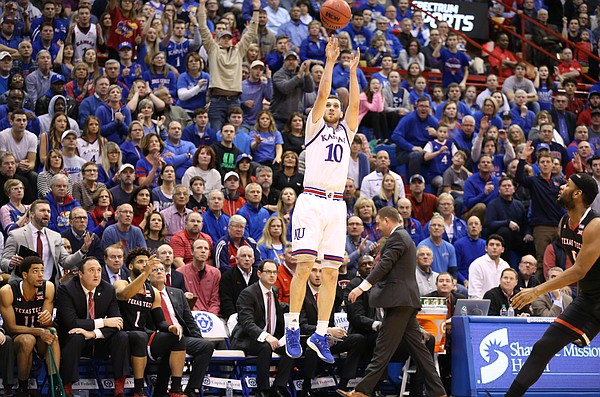 Kansas guard Sviatoslav Mykhailiuk (10) puts up a three before the Texas Tech bench during the first half, Tuesday, Jan. 2, 2018 at Allen Fieldhouse. by Nick Krug

√ (9:58) — KU beat Tech’s transition defense as Graham threw ahead for Mykhailiuk on the right sideline, in front of the Red Raiders’ bench.

X (8:50) — Garrett kicked to Vick on the left half of the floor, but Keenan Evans was right there to outstretch his left arm and contest.

√ (8:32) — Another Graham push with Mykhailiuk out in front of him on the right wing provided an open look, yet again in front of the Tech bench.

√ (7:12) — Graham saw an open window up top when Niem Stevenson gambled, trying to swipe a Mitch Lightfoot pass, and Graham stepped into a 3-pointer

X (6:13) — Malik Newman caught a Graham pass on the right wing and tried to jab-step Justin Gray to create space for a step-back 3, but Gray stayed low, then got his hand in Newman’s face

√ (4:54) — Graham, whose feet stood on the beak of the giant mid-court Jayhawk logo, simply ball-faked on a catch to give himself room, took one dribble to his left and nailed a long 3 before Gray could recover.

X (4:09) — When Tech smothered Graham with a trap in the left corner, it left Vick wide open 10 feet away. Despite the extra space, Vick’s 3 rimmed out. 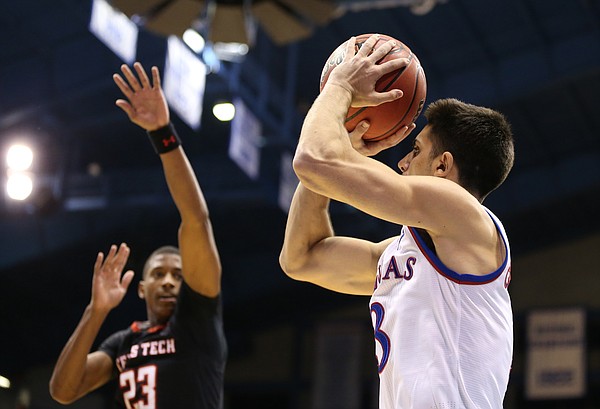 Kansas guard Sam Cunliffe (3) puts up a three from the corner against Texas Tech guard Jarrett Culver (23) during the first half, Tuesday, Jan. 2, 2018 at Allen Fieldhouse. by Nick Krug

√ (2:23) — Azubuike caught an entry pass in the paint just below the free-throw line. When Tech’s defense shifted its focus toward the 7-footer, the center spotted backup wing Sam Cunliffe open in the left corner for as open a look as he’ll see all year.

X (1:18) — Following a timeout, Graham dribbled up the floor and Mykhailiuk set a ball screen for the point guard before popping open for a quality 3, which hit the back of the iron.

X (0:43) — Graham tried to exploit Tech’s retreating transition defense by pitching the ball to Mykhailiuk on the perimeter for a third time. When Tech closed out and forced him to drive, the senior from Ukraine kicked to Vick, who had a great look from the right side rim out.

X (16:59) — Mykhailiuk effectively slipped a ball screen for Graham and found an opening in the right corner. A pump fake sent Jarrett Culver flying by Mykhailiuk, who rose up and missed a high-percentage shot, leaving it short.

X (15:45) — A ball screen at the top of the key courtesy of Azubuike allowed Mykhailiuk to reach the apex of his jumper before his defender could recover. However, the 3 only made it as far as the front of the rim.

X (14:57) — Vick’s baseline drive gave him a lane to make a skip pass out to the right wing for Mykhailiuk, who missed his fourth 3 in a row.

X (10:04) — KU tried running Mykhailiuk off an Azubuike pick near the right block, and the 280-pounder gave the Ukrainian senior ample space for a right-corner 3, which refused to fall through the cylinder during a tough second-half stretch for Mykhailiuk.

X (7:03) — Thinking he might have caught Brandone Francis off guard as Marcus Garrett attempted to get open a few feet away, Graham pulled up with 21 seconds on the shot clock and misfired while fading away from Francis on a 3.

X (5:41) — Utilizing no action, Newman attempted to go one-on-one versus Francis on the left side of the floor, settled for a well-defended 3 with 17 left on the shot clock and missed to the left.

X (5:19) — A hard dribble and step-back gave Mykhailiuk the clearance he desired near the right corner momentarily, but Culver regrouped to get a hand in the shooter’s face.

X (5:17) — Mykhailiuk’s long offensive rebound of his own missed 3 allowed him to shovel a pass out to an open Graham at the top of the arc, but his fellow senior missed as a defender flew past him.

X (4:11) — Newman drove and passed to nearby Vick on the left wing. Though the junior from Memphis made a quick dribble to get more open, Francis’ extended arm obstructed Vick’s look at the 3.

X (1:54) — Down eight with less than two minutes to play, Graham tried to deliver a needed 3 from the right corner off a Newman pass. But he did so knowing Zhaire Smith was right there, and left the attempt short.

X (1:07) — With the Red Raiders’ lead up to 10, Vick dribbled into a pull-up 3 on the right side, but Culver went up to defend it and make sure KU got nothing easy.

Unsurprisingly, KU fared far better when it found quality looks at 3-pointers (6-for-10 in the first half, 6-for-15 overall), as opposed to attempts that qualified as less-than-ideal (0-for-4 in the first, 0-for-11 overall).

Asked for his assessment of what his Red Raiders — now 14th nationally, with a 29.3 percent 3-point defense — did to take away one of KU’s strengths, Chris Beard said some good luck played a part in it.

“They got some good looks. We made some mistakes on some switches, so we were fortunate tonight,” Beard said. “But I think you’ve got to give our players credit. I do feel like there was an urgency to guard the 3-point line. With that came the opportunity for Kansas to drive the ball against us in the second half. But luckily we had a lead big enough to where we could sustain that.”

Bill Self, when discussing how Tech’s defense of the 3-point line might have differed from other opponents, cited how the Red Raiders defended ball screens. Beard’s players iced or downed in those situations at times — a strategy that, when successful, takes away the potential to even attempt a 3-pointer, because the defenders aren’t going under picks, gifting shooters with clear lines of vision.

“They are a pressure defensive team. Chris has done a great job of getting them up the floor and playing their man before he catches it and all that stuff. So I would say they did a good job of playing higher on the floor and not letting us get a lot of wide-open looks,” Self said.

“To me, the first half we made six 3’s and I thought three of them were awful shots, they just happened to go in,” KU’s coach added.

Mykhailiuk, who went 3-for-4 from 3-point distance in the first half and 0-for-5 in the second, said the Red Raiders’ defensive activity made them unique.

“Definitely. It started with denying the ball,” said Mykhailiuk, who is shooting 38-for-84 (45.2 percent) on 3’s this year. “They didn’t let us catch anything. It was breaking down everything.”

this team doesn't do anything good but shoot 3's..yeah, I wish they would drive more but even when they do its either blocked, missed, or they are called for a charge...