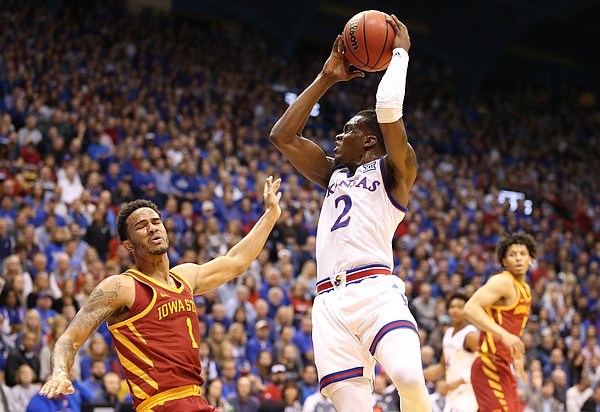 Kansas guard Lagerald Vick (2) sends Iowa State guard Nick Weiler-Babb (1) to the floor after a charge during the first half, Tuesday, Jan. 9, 2018 at Allen Fieldhouse. by Nick Krug

The Lagerald Vick who scored 20 or more points six times during the season’s first two months has yet to be seen in the Kansas basketball lineup so far in January.

After opening Big 12 play with a bang on Dec. 29, scoring 21 points and shooting 5-for-8 on 3-pointers in the Jayhawks’ win at Texas, Vick’s scoring impact has suffered a severe drop-off.

KU coach Bill Self used three words to describe the difference in Vick’s contributions of late, compared to the impact he was making before: “not even close.”

Self reached a point with Vick earlier this week, ahead of KU’s Big Monday showdown with West Virginia, that the coach decided not to start the athletic guard from Memphis for the first time this season — not because of his plummeting numbers, but due to Vick’s perceived lack of focus during Sunday’s practice; a decision Self later described as “rash.”

A sixth man in name only for what proved to be a crucial KU road win, Vick played 36 minutes off the bench against the Mountaineers. But his production matched his recent trend: 9 points, 4-for-12 shooting, 1-for-6 from 3-point range.

“I did against West Virginia. To be honest with you, I hadn’t in games prior to that,” Self said. “You know, K-State he stepped up and made two big 3’s and scored some baskets when we had to have them, late-game situation. But his activity level hasn’t been good at all there for about a week-and-a-half stretch, three-game stretch.” 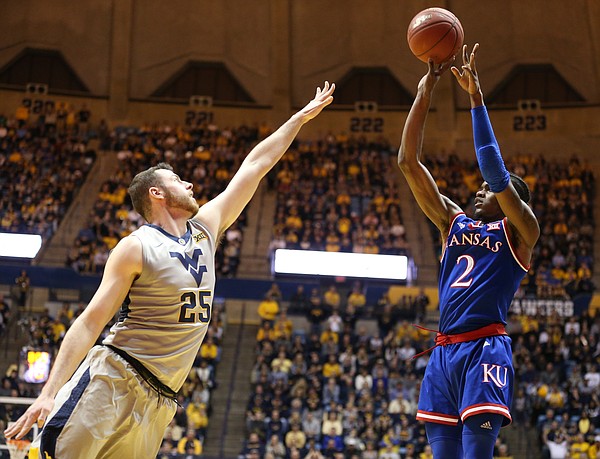 Kansas guard Lagerald Vick (2) puts up a three over West Virginia forward Maciej Bender (25) during the first half, Monday, Jan. 15, 2018 at WVU Coliseum in Morgantown, West Virginia. by Nick Krug

Most of the offensive positives Vick provided at West Virginia came in the first half, when he shot 4-for-8, and scored all 9 of his points. Vick hit a 3 less than a minute after checking in. His second basket came shortly after a Mitch Lightfoot steal. He scored a layup off a Svi Mykhailiuk pass in response to the Mountaineers taking their largest lead of the game (16). Later, Devonte' Graham set him up for his fourth basket. In his 19 first-half minutes he also secured all three of his rebounds.

In the second half, though, Vick shot 0-for-4 and contributed no points or rebounds. He stole the ball twice in one 45-second stretch midway through the half. Vick also set up Mykhailiuk for a 3-pointer that cut WVU’s lead to 57-51, and assisted a Graham 3 to narrow the margin to one with 4:54 to play.

“I thought against West Virginia it was a lot better,” Self assessed of Vick’s activity level. “I thought he made winning plays throughout the game that gave us a chance, and that doesn’t always translate to scoring, but I certainly thought he was more aggressive.”

Although Vick has proven to be a proficient 3-point shooter this year (32-for-75, 42.7%), he likely settled too much in the second half at WVU, when he missed three 3-pointers. He’s shooting 58.3% inside the arc this season. Per hoop-math.com, Vick makes 71.8% of his attempts that come at the rim and shoots 41.1% on 2-point jumpers.

It’s clear Self wants Vick making more of an impact in the scoring column. The coach offered a recommendation for how the junior can get back on track in that category while becoming more impactful overall.

“If he’s our best athlete, play to your athletic ability,” Self said. “And I thought he did a little bit better job against West Virginia.”

In the first half at WVU at least, Vick attempted four shots in the paint. Kansas needs him scoring easy points inside either by driving it, crashing the offensive glass or getting out in transition, where he can soar for dunks that should energize both the slumping guard and his teammates.

As for that athletic ability Self referenced, the Jayhawks will benefit as well if Vick uses his speed and explosiveness to hound opposing guards defensively and attack the glass, as well.

Obviously, Vick doesn’t have to score 20 points a game. But Kansas does need him “turned up,” as Self has been known to say. An energetic, locked-in Vick can provide KU with a little bit of everything: scoring, passing, rebounding and defense.

I think he comes back for his senior season,,any thoughts???

Vick unarguably is springy, super athletic, and quick. Without dribbling the ball. He definitely needs to speed up his dribble, lower his shoulder when driving through a defender, he needs to fake his shots more. He's got to move his feet quicker while driving. He seems to walking instead of being bouncy while driving. You'll move much faster if you bounce your feet while dribbling. He needs to watch how Roach explodes to the basket from downtown. Vick can be as lethal as Roach getting to the basket. Oh, and he needs to relax his palm a little bit when shooting 3s. That's just my 2cents.

I doubt that the NBA wants this kid anytime soon. He will return.

I'd recommend he declare, go see what the NBA tells him about what he needs to work on, and then, like Svi, come back and light things up his senior season. KU will need senior guard leadership next year. My two cents, anyway.