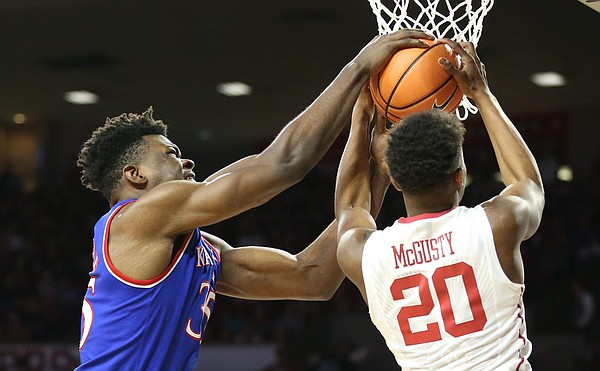 As Bill Self continues to address his Kansas basketball team’s ongoing rebounding issues, the coach knows one player in particular could do all of the Jayhawks a favor by making a more vigorous impact on the glass.

On the same afternoon Self revealed a lack of effort on the part of Lagerald Vick led to the junior’s removal from the starting lineup, the 15th-year KU coach didn’t hide his displeasure for center Udoka Azubuike’s rebounding of late, either.

A 7-foot, 280-pound sophomore from Nigeria, Azubuike has secured six or fewer rebounds in each of the Jayhawks’ past four games, two of which ended as losses.

It’s the lack of defensive boards in particular that drives Self mad, though, because KU so often has failed to end opponent’s possessions after the first shot attempt. Oklahoma State destroyed Kansas with 26 second-chance points off 16 offensive rebounds on Saturday. In the Jayhawks’ past 11 games, nine opponents have reached double digits in second-chance points. During that stretch dating back to the start of Big 12 play, KU’s foes are averaging 15.4 offensive rebounds a game and scoring 14.9 points a game off those extended possessions.

So what has been lacking from Azubuike, who averages 7.3 rebounds on the year and has pulled down nine or more on nine occasions?

“I’d say just quickness, intensity, athletic ability, want-to more than anything else,” Self listed. “He got a defensive rebound against Oklahoma State on the first possession the other day — and that was it. He got one to start the second half — that’s it. Got two (defensive) rebounds the whole game. He plays a lot of minutes.”

Azubuike has contributed three or fewer defensive rebounds in five straight games. He averages 4.6 boards on defense this season and 3.8 in Big 12 contests. 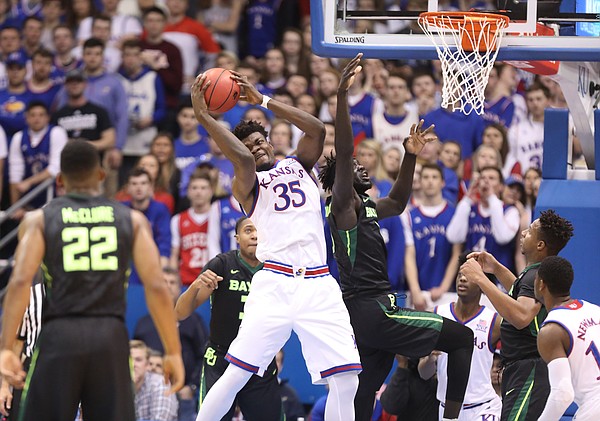 Kansas center Udoka Azubuike (35) rips a rebound away from Baylor center Jo Lual-Acuil Jr. during the first half, Saturday, Jan. 20, 2018 at Allen Fieldhouse. by Nick Krug

“It’s great for a big guy to score points, and we love that,” Self said after Azubuike, the NCAA leader in field goal percentage (76.2 percent) made 8 of 11 shots and scored 20 points in a loss to the Cowboys. “And I don’t want to take that away from him by any stretch. But, you know, for us to win, everybody’s got a role and everybody’s got to play to their role. And he knows he’s the biggest guy on our team. He knows he’s the best defensive rebounder. He knows he’s that, so it’s up to him to play to that.”

Looking at season averages, Azubuike’s 4.6 defensive rebounds a game lead Kansas (18-5 overall, 7-3 Big 12), but just barely. Malik Newman gathers 4.5 and Vick is at 4.3. In league games, Newman leads the team with 4.7 boards on the defensive end of the floor, where Vick contributes 3.5 and Svi Mykhailiuk has provided 3.2 on average.

Perhaps playing alongside new starter Lightfoot will make Azubuike a more effective rebounder as Self gives playing bigger a chance, despite a guard-heavy rotation. The move wasn’t made specifically to address KU’s shortcomings on the glass, but it certainly couldn’t hurt a team that has been out-rebounded in 11 of its lsat 12 games.

Self remains hopeful his hulking starting center will begin embracing the idea of becoming KU’s defensive closer, a player capable of ending opponents’ possessions by snatching the first miss out of the air and eliminating second — and sometimes third — attempts.

I think Dok's biggest problems with rebounding is he is trying to avoid fouling so he's just not aggressive in that area. It doesn't help that he seems to get called for more ticky-tack fouls than anyone else. And he knows we don't have anyone to fill in for him when he's in foul trouble so he tries too hard to avoid fouling.

That's a good point, Dale. Hopefully Self is addressing that. Dok has certainly gotten a lot better at defending without fouling, so hopefully he can do the same thing when it comes to rebounding.

Many possessions Dok is fighting multiple defenders for rebounds since opponents know he's the only "big" they have to deal with. So I suspect this change won't only help his rebounding but it will also open up rebounds for Mitch.

Self doesn’t buy these excuses. ‘Buike is simply mediocre at rebounding fundamentals. He doesn’t anticipate well, fails to block out, and then release to go after the ball.

He reminds me of Chauncey Gardiner - he likes to watch.

He certainly doesn't anticipate well especially on balls that don't hit the top of the rim. If a shot is low or short and caroms off downward or hard he usually doesn't get a hand on it. He doesn't have basketball instincts mostly due to being late to take up the game? I don't know but you are right in all your observations.

Since Vick is not out of his funk, its more than a slump people, we might as well start Mitch, he might get a few more rebounds, block a few shots, and get some crips. if so we will be more effective than we are now. In fact, two big men, might just open it up a little. Truth is Devonte, Svi and Newman have been doing most of the work. They just need a little help.

Here's an advice to you, Dok: occupy, occupy, occupy. Yes, spread your legs, spread your arms out and ready to catch, stick your butt out, occupy as much space as possible under the basket, once you get position; i.e. in front of your defender, facing the basket. Always remember the basic rule: stay between your man and the basket - that's very fundamental. Most of the time, you let your man beat you - then you try to grab the ball from behind, that's not good, buddy... Establish your position once you see the ball is being launched, while looking up. Most of the time, you're just looking up... You got to react fast. If you can destroy rim with your dunks, imagine how many rebounds you'll get if you're always ready to catch the ball in the air. It's all about readiness. Keep your feet always bouncing, keep them moving, like Ali. Ready, set, rebound!!!!!

It seems to me that Dok sometimes misses rebounds because he is trying to be the defensive enforcer blocking shot. Because he's attempting to block shots, he's not in position to rebound.

Unfortunately, he doesn't seem to have the timing and anticipation to block shots well or consistently. It is sort of like a guard going for a steal. If you get it, great, but if not it leads to much better odds for the opposition.

That's a pretty good assessment. And I'd add this bit of unsolicited advice to Dok...keep your mouth shut, pick up your lunch pail and go to work.

All good points. I will add that too often Kansas’ perimeter players are caught rubbernecking when opposing players launch treys. Instead of swarming the paint to grab the carom, they are caught out of position to get the rebound. When Azubuike is the only KU player under the basket surrounded by 3 or 4 opposing players, he can be in the perfect position to get the rebound yet have the ball taken away by a player with quicker hands. Rebounding is more than just an “individual” effort; it requires a “team” mindset, something it seems other teams embrace, yet eludes this year’s Kansas team.