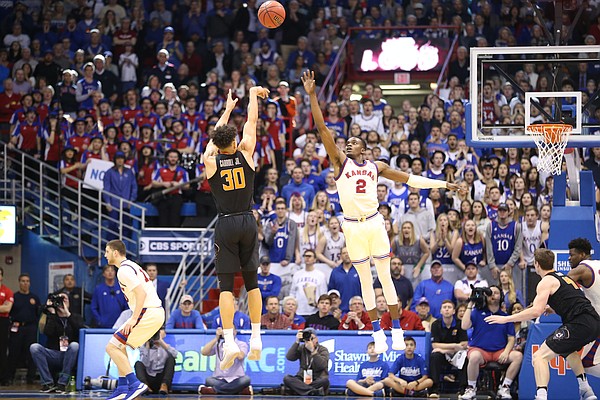 Kansas guard Lagerald Vick (2) lunges to defend against a three from Oklahoma State guard Jeffrey Carroll (30) during the second half, Saturday, Feb. 3, 2018 at Allen Fieldhouse. by Nick Krug

When a visiting team comes into Allen Fieldhouse and leads for close to 38 minutes it’s safe to say the Kansas basketball team had some issues.

The Jayhawks ran into so many problems Saturday against Oklahoma State, in fact, that head coach Bill Self said the Cowboys “whipped” KU in an 84-79 upset.

With Kansas falling at home and Texas Tech handling its business on the road, winning at TCU, the Jayhawks and Red Raiders enter the coming week tied atop the Big 12 standings at 7-3.

Here is a look at five statistics that influenced KU’s latest loss.

Oklahoma State never looked uncomfortable in its win on KU’s James Naismith Court because the Jayahwks couldn’t stop their opponent from making shots.

The Cowboys’ 51.6% shooting was the best mark by a KU opponent this season. It was the second-best percentage of the year for OSU.

By converting on 64% of their shots in the second half, the Cowboys headed back to Stillwater, Okla., victorious and owners of the best single-half field goal percentage by a KU opponent since Iowa State made 64.3% in the first half of a 2016 home win for the Cyclones at Hilton Coliseum.

KU shot 57.1% from the floor in the second half but it didn’t matter because it couldn’t get the defensive stops it needed in order to recover. OSU converted 14 of its final 18 field-goal attempts.

KU is now 7-20 under Self all-time when its opponent shoots better than 50 percent from the floor.

Usually it’s Kansas who benefits from draining jumpers from beyond the arc, but on this particular Saturday at the fieldhouse, it was Oklahoma State that harnessed the power of the 3-ball.

The Cowboys arrived in Lawrence shooting 33.7% from deep in Big 12 play. They left having knocked down double-digit 3-pointers for the first time in conference competition.

Oklahoma State shot 12 for 27 from long range (44.4%) getting the upset-minded visitors within one 3-pointer of their season-high of 13, which came in November against Oral Roberts. The Cowboys’ 12 makes from 3-point land were the most by a Kansas foe since OSU made 12 in Stillwater versus the Jayhawks to close the 2017 regular season. 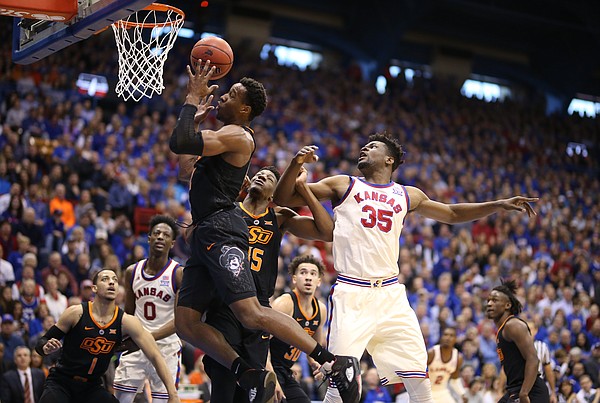 Although the Jayhawks snapped a 10-game streak of losing the battle of the boards earlier in the week at Kansas State, they were right back to their old ways versus OSU.

KU’s players didn’t bring the same activity to the glass as their opponents, and Oklahoma State easily out-rebounded the favored home team, 41-28, making the Cowboys the fourth team in Big 12 play to win the rebound margin by double digits versus Kansas.

The Cowboys so thoroughly out-worked KU on the glass early on that they gathered 11 offensive rebounds on on their first 15 missed field goals, giving them 20 second-chance points and a 30-18 lead.

Kansas sophomore center Udoka Azubuike came up shy of his season average of 7.3 rebounds for the fourth straight game, finishing with five.

Another rough showing for Vick

A reliable offensive contributor earlier in the season, KU junior Lagerald Vick shot below 40% from the field for the fourth time in the team’s previous five Big 12 games.

A non-factor in the first half, when he made 1 of 3 shots and turned the ball over twice, it got even worse for Vick in the second. While playing all but one of the game’s final 20 minutes, the athletic 6-foot-5 wing went 1 for 7 from the floor and only made 1 of 4 from 3-point range.

He failed to reach double-digit points for the seventh time in KU’s 10 Big 12 games.

On various occasions this season Kansas has had issues defending quick, talented perimeter players. The latest such guard to victimize the Jayhawks was Smith.

A 6-3 graduate transfer facing KU for the first time, Smith scored 10 of his game-high 24 points in the final 6:46, empowering Oklahoma State to complete the upset.

Almost every time the Jayhawks seemed poised to make a spurt and narrow the deficit, Smith was there to finish a jumper or a layup and extend OSU’s lead to eight or nine points.

Although he missed the front end of a one-and-one with 31 seconds to go, allowing Kansas to get within three, he responded by sealing the victory at the foul line with two clutch free throws with 0:10 on the clock, giving him a new career-high in scoring (24). 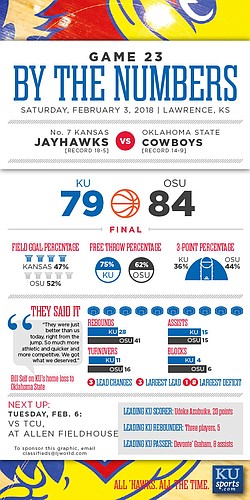 "The Cowboys so thoroughly out-worked KU on the glass early on that they gathered 11 offensive rebounds on on their first 15 missed field goals, giving them 20 second-chance points and a 30-18 lead."

Glad you called it "out=worked" and didn't use the horrible excuse thrown around about 4 guard size. Giving up a 70% OR rate is just lazy and the game in a nutshell.

Yep. As much as each of the stats cited are valid, it all comes down to rebounding, and most of that comes down to effort. It's like KU wasn't awake yet for the early start.

And as much as this team can show flashes of brilliance, I've never really believed it's more than a Sweet 16 team. I still believe that.

If you look at the replays, you will notice that the Jayhawks did a terrible job of blocking out. It made it easy for OSU to get offensive rebounds and stick-backs.

The Jayhawks simply did not come to play. And that is on Coach Self and his staff.

One of the best defensive things that OSU did was they had a player face guarding Devonte the entire game preventing him from effectively running the offense. The offense was totally dead in the first half.

The real question is what does this team do, when the shots are not going in. Lack of energy on defense and rebounding, and a lack of cohesiveness make this teams prospects limited.

We are likely to win 5 of the 8 games we have left, but that is not going to be enough to win the championship, let alone go anywhere in the tournament. Last year's team played 4 guards, but that is totally misleading, because of Josh Jackson. Josh was a savage rebounded, and a constant presence on defense. We also had Landon who totally understood his job, and did it.

This year we added Doke and Vick, and frankly they are both insufficient replacements. Doke is totally understandable, he is still totally a development project. He is a good project to have, but nowhere is he there. We are a team Frankenstein. A bunch of pieces that don't always work together, and lack a true understanding of how to win. We have to see the reality, it could be that this conglomeration has actually over achieved.

If Vick is not playing, put Cunliffe in, its as simple as that. Run them in and out, till somebody makes a contribution.

Team Frankenstein. Best moniker of the year, true and it hurts. Boris Karloff would be a great power forward.

The coaches seem to be at fault.

Yesterday they refused to guard the 3 pt line and refused to block out.

Yes, we have one of the best college coaches, but the game has passed them by. He is so stubborn he will NOT adjust a faulty game plan during the game.

Being 90 yrs old, observation says that Self's time s limited. It may take a few years, but they don't need me to be an all faithful fan!

@Bob..your assessment about Self is way off..to imply that the game has "passed him by" is extremely idiotic...This KU team,even with all its flaws will still win at least 25 games this season if not more..considering all the transfers before the season, losing Preston AND trying develop a still raw Azibuike, and if you include the lack of depth on this team, this is actually one of his better coaching jobs...Selfs time is not limited, whenever he leaves KU, it WILL be his choice..his job is safe..stop blowing this out of proportion

losses can be defined into 2 categories: 1) you have a complete team, but you just have a bad performance that game and 2) the loss is due to a lack of personnel...and by that I dont mean a key player is injured, but more like the team itself has limitations based on its personnel..like a team that doesnt have good shooters losing because they shot like crap..there isnt much you can really do about that.....so with THIS KU team, they are who they are..they will never be a good rebounding team this season and they will get out rebounded virtually every game..the best they can do is rebound just good enough to limit the damage or make enough 3's that it offsets the mass amounts of offensive rebounds they will give up. Effort does play a part and guys can get better....my assessment on Vick is this, he is a good shooter but his ball handling skills are subpar..he losses control of the ball so many times. He thrived in the NON con schedule because KU played inferior competition and he got plenty of open looks..teams are now making him put the ball on the floor..Svi has gotten better at that, Vick has not. Vick isnt gonna be a guy that drives to rim alot this season, we just have to accept that..but he can score points in other ways..

What should we expect???

Maybe we should sit back and be a little amazed that, somehow, despite everything, this team has won 18 games so far including beating Syracuse, Kentucky and West Virginia, have 4 away league victories and is currently tied for first place.

Spot on Mr. Tony. Garrett did have a positive impact yesterday and throughout the year on defense. I'm thinking giving him all of Vick's minutes, come what may, might just pay off increasingly until 8 or 10 games down the road he might be a better addition than Lagerald. He has made a couple of threes and has driven the ball with some success. We will probably end up 12 and 6 in conference so play for tourney.

Garrett and Vick were no-shows in this game. So you have 3 against 5 for much of the game. Another bad game, but following a real good game at KSU. If the team is hitting baskets, they are practically un-stoppable, but if they aren't hitting they look terrible.

How about Dok's FT crossing 50%? He is definitely in good traction of being a 70-80% FT looking at the way he shoots FT now. I believe in Dok!

Looks like you meant the title be "5 stats that pooped for Kansas in a home loss to Oklahoma State"...

There may be a team chemistry issue with this group. Vick and Cunliffe have probably already made the decision to transfer. Early on, Vick seemed to go hard for rebounds. But, lately, he never drives the ball; does not take charges; and never attacks the offensive boards. And, yet he is probably the most athletic player on the floor during most games. Why the lack of aggression and effort? An excellent free throw shooter, in 755 minutes, he has only attempted 33 Free throws. Likewise, Svi in 787 minutes has also only taken 33 Free throws. This team simply does not battle or attack the hole. And, only Lightfoot is willing to give his body up to take charges. Very soft. So, a team that does not find a way to get to the free throw line. or attack the offensive boards, or get steals, (KU is averaging only 7 steals per game vs 12 TOs), is going to have to shoot threes at better than .40% to have a chance.