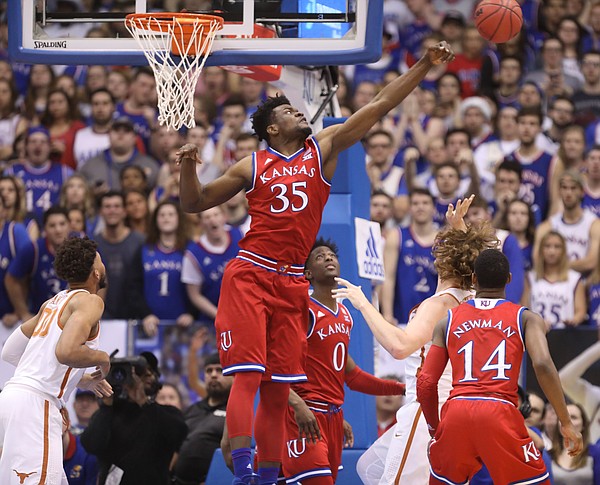 Kansas center Udoka Azubuike (35) gets up to reject a shot from Texas forward Dylan Osetkowski (21) during the first half on Monday, Feb. 26, 2018 at Allen Fieldhouse. by Nick Krug

It only took 21 minutes Monday against Texas for center Udoka Azubuike to supply Kansas with one of the most productive games of his young career.

The 7-foot sophomore yielded 20 points and often seemed invincible in his domination of the Longhorns’ front line. Defenders have looked overmatched versus Azubuike before, but the big man from Nigeria completely crushed the Longhorns, succeeding on 10 of his 11 attempts in the paint, a foray that included six dunks.

The Jayhawks’ colossus shot 90.9% from the field, the highest mark for KU since Perry Ellis made 11 of 12 (91.7%) versus Iowa State in the 2014 Big 12 Tournament. Azubuike’s 10-for-11 shooting also represented the best outing in a conference game by a Jayhawk since Julian Wright posted the same line against Baylor, in 2006.

Even better for No. 6 Kansas (24-6 overall, 13-4 Big 12), Azubuike looked lively on the defensive end of the court, as well, tying his career high with 5 blocked shots.

“That’s exactly how he should play,” Graham said, noting assistant coach Norm Roberts went up to Azubuike at shoot-around the day of the game and conveyed the absence of Longhorns star center Mo Bamba (injured) didn’t mean KU’s center could take the day off.

“You should want to go even harder because you’ve got a mismatch now,” Graham related of Roberts’ directive. “So he played exactly how Coach Rob wanted him to play.”

After watching his 18-year-old center’s thrashing of UT bigs Jericho Sims and Dylan Osetkowski, KU coach Bill Self, of course, appreciated not just the point production, but Azubuike’s overall effort, which Self agreed is becoming more consistent late in the season. 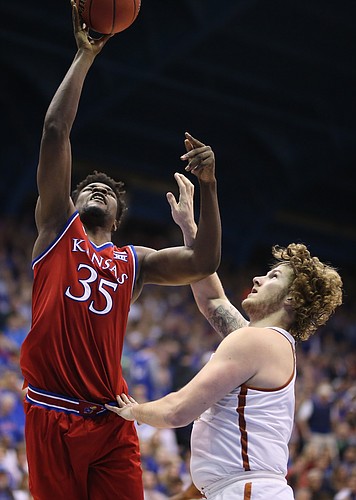 Kansas center Udoka Azubuike (35) puts a shot over Texas forward Dylan Osetkowski (21) during the second half on Monday, Feb. 26, 2018 at Allen Fieldhouse. by Nick Krug

“I think he’s playing with a lot more energy and a lot more oomph, probably, than what he was earlier,” Self appraised, calling Azubuike as active as he has seen him this season.

What’s more, the massive sophomore pulled down 8 rebounds for Kansas, the sixth time in 17 Big 12 games he gathered at least that many.

But there was one aspect where Azubuike, Self was quick to point out, seemed to regress. An 18-for-31 free-throw shooter in the nine games following his infamous 1-for-8 night at Oklahoma, in February, KU’s big man missed all four of his attempts at the foul line versus Texas.

“I hadn’t seen him shoot like that in a while,” Self said, after Azubuike even air-balled one try. “So we’ve got to get back in the gym and do a lot (of work) on that.”

In order to maximize Azubuike’s impact in March, Self indicated he and his staff might need to start more closely monitoring how long KU leaves the 285-pound center on the floor.

“He gets his second foul because he’s tired,” Self said of a defensive play on the perimeter, when Azubuike didn’t move his feet quickly enough while trying to hedge against Matt Coleman on a ball screen. The whistle kept Azubuike, a game-altering talent, on the bench the final 6:55 of the first half.

“That worries me a little bit,” Self said. “I probably need to not let him play as long of stretches.”

Azubuike had been on the floor for 5:03 worth of game clock when he showed fatigue and picked up his second foul.

He didn’t get called for any fouls while playing 12 second-half minutes, a stretch during which Azubuike made 6 of 7 shots, swatted 3 UT attempts and gathered 5 rebounds.

The mightiest presence on the KU roster played for stretches of 6:33 and 4:04 during the second half, as well as a brief 0:20 stint late in the win.

No one else in a Kansas uniform possesses the same potential as Azubuike to influence outcomes on both ends of the floor. As critical as Graham and Svi Mykhailiuk are for Kansas, a “turned-up,” as Self likes to say, Azubuike will be equally paramount in the weeks ahead in order for the Jayhawks to reach their ceiling.

Shooters are great, and basketball is going to a more "positionless" style. But there's no substitute for having the biggest, longest, strongest dude on the floor with amazingly soft hands and a rare explosiveness for a guy his size. There aren't very many Mo Bambas out there that can negate Dok a little bit on his own by pure length. 9 times (or more) out of 10 he will be the one position night-in, night-out where we're always going to have a clear advantage.

And if a team wants to dedicate what it takes to defend him effectively, there's going to be an open body somewhere, and I've been impressed with how good he's been and finding that guy (usually Vick or Garrett standing open under the hoop).

His continued development has been one of the main reasons why KU has been able to fight through some deficiencies this year. He'd do so well to develop for one more year here, when he's, you know, finally the age of a college freshman!

Really? Udoka is only 18, and is a sophomore?

I'm not sure when his birthday is, but it is my understanding that he was 16 when he first got to Kansas. He could have had a birthday right after that.

I think you may be confusing Dok with Svi, who arrived at KU when he was 16.

No confusion. See above comment on Dok's birthday. He's still 18.

I still don't understand why Dok's FT shooting wasn't more of an emphasis in the offseason. It seems like Self & Co. have been surprised by how bad it's been; why wouldn't they have noticed it last year and focused on ways that he could improve?

And I still think the solution (at least for next year) would be for him to try the "Rick Barry" underhanded approach.

no way len. he has shown he can shoot normally very well. it's all mindset and training. going underhand would just throw all that away.

The new mechanics are not deeply engrained yet. It is still very much a thoughtful part of his game, so he needs to good memory motion before each game or he will revert to the old bad habits.

Ironically, he was actually worse last year - 38%, so 40+ was an improvement. Was it his off hand that was hurt? Still probably wouldn't let him do much, though that would have been really good practice. Balancing the ball in 1 hand would have forced him to keep his elbow in.

I broke my left wrist during practice in 9th grade. It was the best thing that ever happened to my shooting form.

wow, I did not remember Dok was only 18. He's really developing nicely. I think his FT shooting may be a reason for him to return next year as I can see NBA teams frowning on a "hack a shack" center. I would be thrilled for him to work hard all summer totally redoing his FT mechanics and coming back next year and being a 60-65% FT shooter. I think that would round out his game to make him a lotto after next years national championship. :)

I think Dok will be back. The NBA game has tons of athletic centers that he's not quite there yet to keep up with them. Also, his FT shooting and not having any touch outside of 5ft. But primarily, this year is a huge year from big men coming out of college. If you look at the mock drafts, there are so many big men out there, I don't know that Dok would make the first round. Plus, there are several boards that he isn't even listed at all. If he'd come back next year, improve his shooting and quickness, he could dominate college basketball interior and really make a name for himself.

Joel Embiid studied Hakeem Olajuwan while he was here. Maybe we should give Doke tapes on Patrick Ewing. I think that is the great center of the past that his game most resembles.