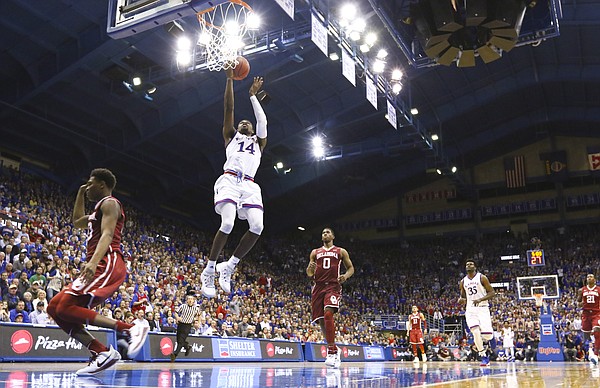 Kansas guard Malik Newman (14) soars in for a bucket during the second half, Monday, Feb. 19, 2018 at Allen Fieldhouse. by Nick Krug

The No. 8-ranked Kansas Jayhawks put triple digits on the scoreboard against Oklahoma, treating the Sooners like a non-conference visitor to Allen Fieldhouse in a Big Monday drubbing.

The 104-74 victory marked KU’s first 100-point game in Big 12 play since the triple-overtime classic against the Sooners in 2016, and the team’s fourth time reaching the century mark this season — the others came versus Texas Southern, Oakland and Omaha.

From a surprisingly impactful Silvio De Sousa, to a classic 23-point, seven-assist night for Devonte’ Graham, Kansas made everything look easy while taking a half-game lead in the league standings over Texas Tech.

Here are five statistics that made the Jayhawks’ rout of Oklahoma possible.

Remember when OU cut KU’s lead to seven points early in the second half? Yeah, neither do I. But it happened.

The Jayhawks (22-6 overall, 11-4 Big 12) so thoroughly dominated during the stretch run the game felt like a blowout from start to finish.

KU made 62.5% of its second-half shots by exposing OU’s subpar defense over and over again. If the Sooners gave a shooter too much space outside, the Jayhawks knocked in 3-pointers (7 of 12). If a driving angle or entry pass to the paint presented itself, Kansas gladly took a layup. KU scored 10 points off lay-ins and 12 points via dunks during the course of the second half.

Kansas scored 26 points in the paint over the course of the final 20 minutes, making it easy to put up 55 points — only the second time the team has put up 50 or more in a half during league play.

This is not a typo: Kansas finished with 13 more rebounds than Oklahoma.

In years past, such a margin in KU’s favor would barely inspire a reaction. But this year’s Jayhawks do not pound the glass the way most Bill Self teams have.

Kansas was out-rebounded in 15 of its previous 16 games before Udoka Azubuike (8 boards) and Svi Mykhailiuk (7 rebounds) helped the home team gather 38, to OU’s 25.

Sharing rebounding responsibilities seemed to be a good sign, too. Lagerald Vick chipped in 6 (his most since Jan. 13), Graham added five and freshman big De Sousa came through with a career-best 6, as well.

If Azubuike isn’t going to routinely snag 10 or more boards (he’s averaging 7.1 on the season, 6.4 in Big 12 games), every KU player who steps on the court is going to have to help out. 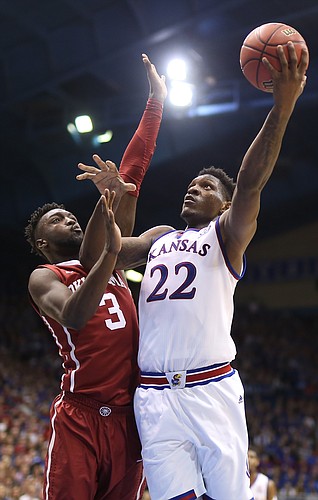 Kansas forward Silvio De Sousa (22) turns to the bucket past Oklahoma forward Khadeem Lattin (3) during the second half, Monday, Feb. 19, 2018 at Allen Fieldhouse. by Nick Krug

KU’s lack of depth has proven to be one of the team’s weaknesses this season. As a result, the Jayhawks more often than not have lacked production off the bench.

The Jayhawks came up short in head-to-head bench points in 11 of their first 14 conference games. That problem went away, at least for one night, against Oklahoma, as the Kansas substitutes outperformed OU’s backups 18-8.

De Sousa, with his perfect 3-for-3 shooting from the floor and 4-for-4 success at the free-throw line for 10 points, outscored the Oklahoma bench by himself.

Neither Marcus Garrett (2 points), nor Mitch Lightfoot (4 points) had a particularly impactful night on offense, but if KU can now get significant help from one of those two or De Sousa every game that would qualify as a great late-season development.

Nothing easy for Young

Oklahoma freshman sensation Trae Young put together a remarkable 26-point, 9-assist show in the Sooners’ January win over Kansas, but had no such luck in the rematch.

KU harassed Young and made him work for every inch at Allen Fieldhouse. OU’s star point guard made just 3 of 13 shots, scored a career-low 11 points and turned the ball over 5 times in 35 minutes in the blowout.

Even when Young got by a perimeter defender the help defense stepped up to make sure he didn’t get into a flow with a layup.

As a result, Young made just 2 of 6 layups in the loss.

No more slump for Svi 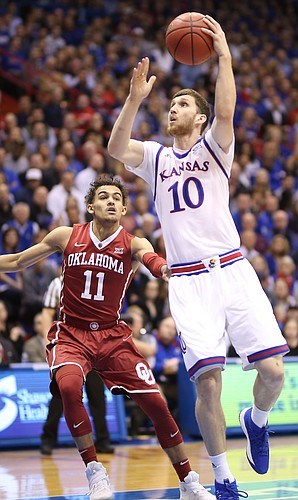 Kansas guard Sviatoslav Mykhailiuk (10) turns to the bucket past Oklahoma guard Trae Young (11) during the first half, Monday, Feb. 19, 2018 at Allen Fieldhouse. by Nick Krug

Just 7 of 26 (26.9%) in his previous four games, a stretch during which he averaged just 5.5 points — almost a full 10 points below his 15.4 average for the season — Mykhailiuk got back on track against OU’s lackluster defense.

The senior from Ukraine scored 16 points on 5-for-10 shooting and drained 4 of 7 3-pointers, his most from long range since making 5 of 9 at Kansas State on Jan. 29.

The slump was an anomaly for Mykhailiuk, whom Self has praised for his consistent effort and attitude all season long. With just three games left in the regular season, the Jayhawks couldn’t have picked a better time to get their senior shooter (88 for 196 on 3-pointers this year) back on track. 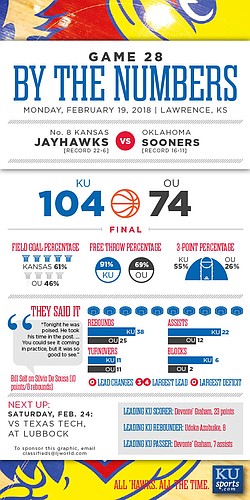 I would contend that Trae's night was even worse than it appeared. I can think of at least 3 times in the first half where he made errant passes or lost his dribble but the ball bounced back to OU. It was a good defensive showing against a team capable of putting up points. Hopefully the team is on the uptick.

Trae is obviously tired of carrying a team that wasn't as talented as most of us thought. When Trae can score 30+ points with 10+ assists, everyone is playing better but I think the load has finally caught up with him.

You think he’s regretting his decision to not play here?

probably not..him being a Oklahoma kid, im sure he dreamed of playing for OU..he has brought them back to relevance this year..I was glad he went to OU..I wanna see other Big 12 teams get top talent besides KU..its good for the conference

they have talent..what they dont have is defense..the OU team of 2016 that went to the FF wasnt dripping with talent, but they played better D and had more than 1 ball handler.

Here's a stat that POPS!

That's huge! Gotta be one of the best O performances of all time for KU.

Only two second half turnovers was very good.