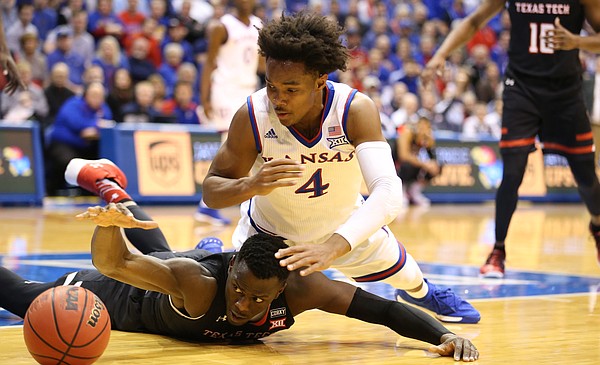 Kansas guard Devonte' Graham (4) and Texas Tech center Norense Odiase (32) dive for a ball during the first half, Tuesday, Jan. 2, 2018 at Allen Fieldhouse. by Nick Krug

While the Big 12 is brimming with quality college basketball teams, each capable of beating any league opponent on the right day, Kansas coach Bill Self knows only one conference squad is capable of feeling legitimately satisfied at this point of the season.

The vast majority of the Big 12 heads into this week’s slate of games disgruntled over at least one recent result. But not Texas Tech, the one sitting alone atop of the standings.

“There are some teams on an uptick, but I don’t think anybody’s ecstatic on where their team is at this point in time, with the exception of obviously the Red Raiders,” Self said.

Big 12 regular-season crowns, of course, have become the standard in Self’s tenure. But the 15th-year KU coach wondered Monday whether his players, either consciously or subconsciously, think too much about the race and extending the program’s streak of titles to 14.

“We probably just need to get better,” Self said. “And, you know, the streak is always thrown at us. Although we don’t talk about the streak I know that’s kind of the elephant in the room, so to speak, at least from what I’ve been told. And we just need to get away from that and concentrate on just playing a game at a time.” 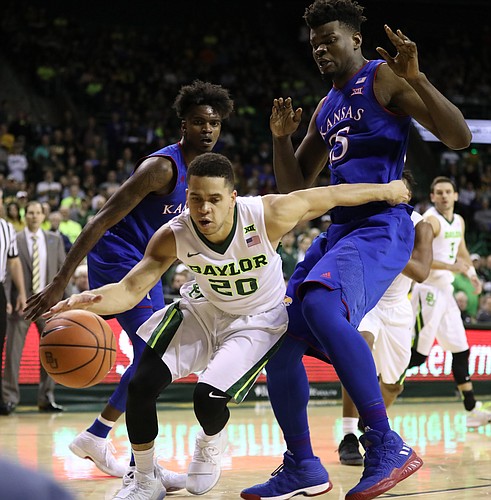 Tech owns a one-game lead in the quest for the title in part because No. 13 KU has dropped three of its past six games, but also due to the Red Raiders’ Jan. 2 statement victory at Allen Fieldhouse.

It has been clear to Self since then that Keenan Allen-led Tech has a tough, athletic roster that is well coached by Chris Beard. So he isn’t in any way shocked the Red Raiders are in first place with six games to go.

“They’re the obvious favorite to win our league,” Self declared, “which they should be — they’ve got a game lead. But they’re also the one team in our league, if you really look at our league, everybody else is puttering around.”

It wasn’t long ago that KU responded from a loss to Tech with a five-game winning streak. Self said his Jayhawks, like Oklahoma (16-8, 6-6), West Virginia (18-7, 7-5) and other teams have played well at times, but have gone through stretches where they “have not been very good,” as well.

Kansas won’t get its rematch with the Red Raiders in Lubbock, Texas, until Feb. 24. In order for the Jayhawks to enter that anticipated matchup in position for the outcome to play a factor in the 2018 title race, they will first have to get through Tuesday night’s game at Iowa State (6 p.m., ESPN2), and then back-to-back home games versus West Virginia and Oklahoma.

“We've still got the vast majority of things in front of us,” Self said. “Probably have as tough a schedule left as anybody in the league, so if we're going to do this, we've got to do it the hard way. But it'll mean more when it gets done if we're able to do it.”

I don't know how obvious it is when we still have control over our own destiny. I'm guessing Self was trying to motivate his players and not lowering their already low confidence.

I didn't see any clear advantages in the remaining games for Kansas, Texas Tech, and West Virginia. I think we will be in real danger of breaking the streak if we lose more than one game.

Our best case is 3rd place at this rate, As soon as Billy's status was in question, this team had no inside depth, we were finished then and just didn't know it.

We all know the streak will end at some point. Maybe this year, maybe in the future. What I don't think any of us knew was that it would be Texas Tech at the top. That is amazing, and hats off to them.

Race isn't over yet -- the Jayhawks can still do it, but it's a difficult road now.