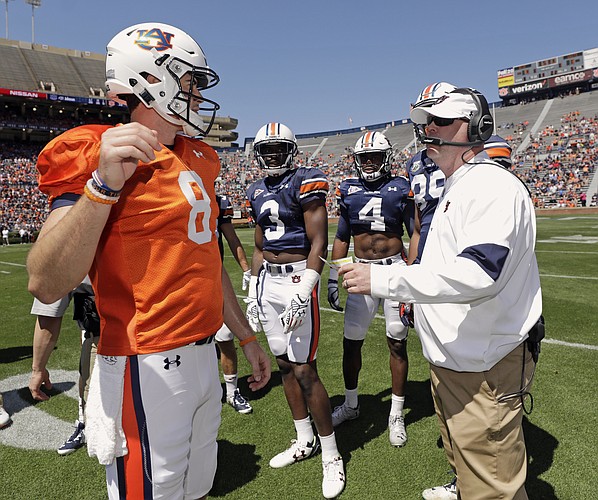 After two years as the offensive coordinator and quarterbacks coach at Auburn, a historically successful SEC football program that routinely plays in the postseason, Chip Lindsey arrived Tuesday at Kansas, where the Jayhawks haven’t been to a bowl game since 2008 and have won three or fewer games each of the past nine seasons.

So how did Les Miles sell Lindsey on the idea of coming to KU?

A Journal-World request to interview Lindsey has not yet been granted, but the team’s newly hired offensive coordinator answered that question and more during a one-on-one interview with KU director of broadcasting and play-by-play voice of the Jayhawks Brian Hanni.

During conversations with his new boss, Lindsey shared, he learned why Miles is a “great recruiter,” as KU’s head coach laid out his vision for the program, one that involves the Jayhawks competing for “championships” in the future.

“I think he’s the guy to take us to the next level,” Lindsey said, “and just the opportunity to work with him hand in hand, I think, was too attractive and really made it an easy decision for me.”

Of course, now that Lindsey, the former offensive coordinator at Auburn, Arizona State and Southern Miss, is at KU, he will play a significant role in how the Jayhawks’ fare under Miles.

While Lindsey didn’t paint a vivid picture of what his offense will look like in 2019, the first coordinator to sign on with Miles plans to build the Jayhawks’ attack around their playmakers. He said, in the spring, he will get a better sense of who those players are and what they’re capable of bringing to the field.

“We want to create an exciting brand of football,” Lindsey said, “exciting brand of offense, try to create explosive plays and make us an offense that’s fun and exciting to watch — one that recruits want to come play for — and really put our identity in this league and on this university.” 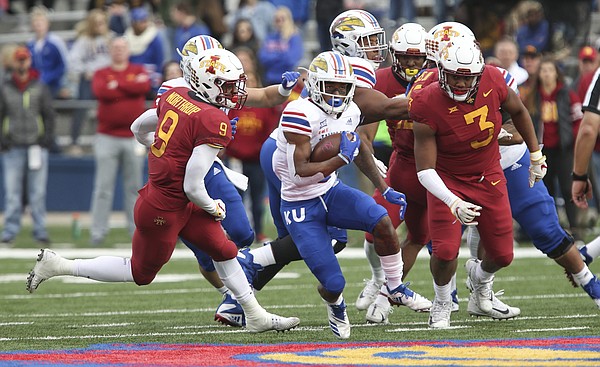 Although at this point Lindsey said he only has watched “a little” footage from the Jayhawks’ 3-9 2018 season, he obviously signed on knowing what kind of weapon KU has in running back Pooka Williams, who rushed for 1,125 yards and seven touchdowns in his freshman season.

“I know about Pooka for sure,” Lindsey said of the All-Big 12 back from Louisiana. “Everybody in the country seems to know about him.”

In the days, weeks and months ahead, KU’s OC plans to get acquainted with the rest of the roster and identify the four or five best playmakers so that he can design creative ways to get them the ball.

At this point it is hard to predict who will be KU’s starting quarterback in 2019. Carter Stanley and Miles Kendrick both have eligibility remaining, while 2018 starter Peyton Bender’s college football career is over. 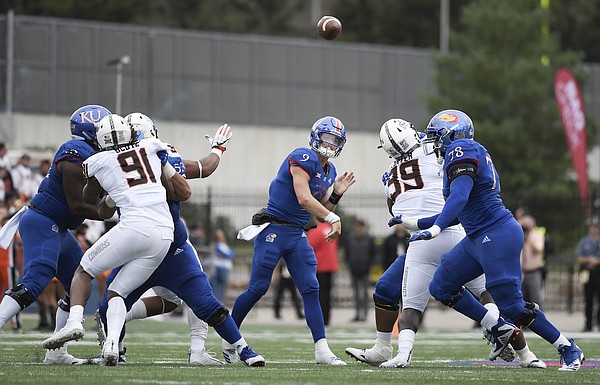 Given that Lindsey coached current San Francisco 49ers starting QB Nick Mullens at both Spain Park High (Ala.) and Southern Miss, Hanni asked KU’s newest assistant how he would go about getting a “great” QB to Kansas.

“Obviously. quarterbacks are special people, because they’re going to get too much credit, they’re going to get too much blame,” Lindsey began. “They’ve got to be guys that are tough-minded, and those guys that I’ve had in the past, that’s what those guys are. They’re very tough mentally. I think we’re going to create a product here that I think quarterbacks will want to come play in our system, a quarterback-friendly system that I think will be an exciting brand of football to watch. We’re looking forward to finding guys that want to be here at Kansas and do something special.”

On the same day Lindsey said those words, during his first day on the job no less, he extended a scholarship offer to dual-threat QB Robby Ashford, a four-star prospect in the Class of 2020 from Hoover, Ala. — where Lindsey was the head coach in 2007.

Blessed to receive an offer from the University of Kansas!!🔴🔵 #rockchalk pic.twitter.com/NakupcgOyF

None by Robby Ashford

The past two years at Auburn, Lindsey coached Jarrett Stidham, who was a four-star dual-threat QB in his high school days. Lindsey said he likely will be on the lookout for mobile quarterbacks he can recruit to KU.

“I think, the way the game’s played today, the defenses are so good, so talented, you’ve got to have a guy that can escape, you know, and make plays in and out of the pocket. I think that’s important,” Lindsey said. “But the number one thing for me is, we want guys that are tough, that are smart, that are intelligent, accurate throwers and, obviously, be able to bring something with their feet, as well.”

Robby Ashford come on down!

That would be a great start to the 2020 Recruiting season. Hopefully now, we (the fan base) will see if Daylon Charlot actually is as good as he was projected to be (when he initially announced his intention to transfer to Kansas). It looks like Kansas will truly have a legitimate QB Coach (time will for sure tell) now.

though I reside in NYC and doubt I'll ever attend a home game, I'll probably buy two season tickets for the 2019 season.

You can send them to me! I'll use them!

Good for you, Danny. I did the same from Maryland. I hope to get to Lawrence for at least one game, and also plan to drive to the Boston College game.

I can't wait to see what schemes and plays they can come up with for the offense. There is a lot of talent on that side of the ball.

Beaty bet his coaching future on Bender. Does bender sound like the quarterback described by our new OC Lindsey? I do think it sounds like Stanley though. Mark my words, Carter Stanley will be all Big 12 next year, along with the Junior receiver from University of Alabama. Our former OC didn't design plays to fit our personnel and failed accordingly. You have to modify your system to fit your personnel. I already sense an improvement on the horizon in a big way.

I agree with you. Great OC's know how to design plays to maximize a player's abilities. Steven Sims Junior and Senior campaign were (sadly) unimpressive. I think that Steven Sims could've left Kansas as the all time leading receiver (had there been an OC who knew how to maximize the QB's and WR's playing potentials). But now, it's forward charge into the new future of Jayhawks Football. Rock Chalk.

Sorry, but I disagree with the Stanley assessment. He was a fairly decent guy at scrambling (much better than Bender), but his accuracy sucked. Over 50% of the time it was too high, too low, or behind the receiver. The new OC wants smart, tough, be able to move his feet, and an accurate passer. Stanley checks 3 of the 4 boxes, but that last box is an important one, and he misses the mark. Maybe he can get with the receivers all off season and throw about 100,000 passes and get better. One thing I am willing to say.......we will have a starter named fairly early on😂😂😂😂

The general sentiment has been that Bender wasn't as mobile as Stanley but there was an article mid season about the numbers saying just the opposite. Irrelevant at this point.

It will be nice to see who will be our 15 or so new recruits this year and what can be done with the returning players next year. It sounds like he has adapted well in the past.

Dirk, there is a difference in being mobile and being willing to throw the ball away to avoid sacks. Bender would throw it away. Carter held the ball too long trying to make a play. That alone explains the high number of sacks for Carter. I do agree with the sentiment that Carter does not have the ideal arm Lindsey is looking for.

I don't see Stanley as having much of a leg up on any incoming QBs since they'll be learning a whole new system. If anything I see Kendrick starting before him, especially in a run first offense...if that's the case. Looks like he's getting at least two more this year.

I am really looking forward to seeing a consistent offense, a consistent competitiveness. We have some big.shoes to fill but I feel good about our future.

Stanley might be the guy, if the offense is designed to maximize what he does well. Actually Pender was not that much more accurate than Stanley, and we all know that the only success he had was when our running game opened up the passing lanes.

I will totally accept which ever qb coach miles and coach lindsey decide is the man, but unlike the past, I believe that they will tailor offense to the players. This is what real coaching is all about.

There is also the leadership factor. For whatever reason Stanley seemed to have the confidence of the team, more than Pender.

Another thing you will not see next year, is shuffling qbs by game and in game. Beatty did all the qbs a disservice in that regard.