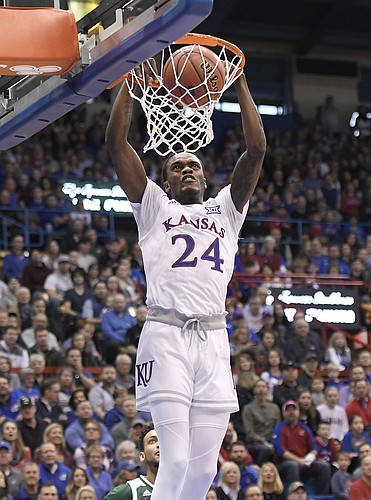 Quick grades for five aspects of the Kansas basketball team’s 87-63 win over Eastern Michigan on Saturday at Allen Fieldhouse.

Keeping things efficient early, KU scored its first 14 points of the game in the paint, even getting some (all be it not too ferocious) dunks from Udoka Azubuike, who returned to the court after missing 25 days with an ankle injury.

The Jayhawks shot an insane 65.4 percent from the floor in the first half and racked up 14 assists on their 17 field goals. With 28 points in the paint, KU led big, 46-25, at intermission. KU’s 8 turnovers in the first half, most of them unforced, were the only knock on the home team.

In the second half, KU didn’t look nearly as pretty offensively. Whether the Jayhawks got too comfortable with their lead or not, EMU did take on an active defensive approach, too. This one looked every bit like a blowout win for KU before the offense slogged through much of the second half.

EMU’s offense struggled mightily in the first half as Kansas kept the Eagles from finding easy baskets in the paint (6 points inside in the first 20 minutes).

Only 23.5 percent of the Eagles’ 34 shots fell in the first half, and the overmatched visitors turned the ball over 9 times. EMU needed to knock down some 3-pointers to stand a chance of keeping up but went 3 of 15 from deep before halftime.

KU closed out its win in the second half by continuing to defend the Eagles well and not allowing any of them to get in a rhythm or catch fire.

Even though the Jayhawks’ offense wasn’t impressive after halftime, their defense did more than enough to keep the game from getting close.

After missing nearly five games with a right ankle injury he suffered during the opening minutes of KU’s win over Wofford on Dec. 4, Azubuike not only returned to the lineup but also the starting five.

The junior center looked even better than imaginable in the opening minutes, too. Azubuike scored 7 quick points, 4 of those coming off dunks no less, before checking out for the first time a little more than five minutes in.

The 7-footer racked up 14 points in the first half, when he finished five dunks for easy points. Azubuike finished his return performance with 23 points (10-for-13 shooting), 9 rebounds and 2 blocks in 20 minutes.

Much of the big man’s success had to do with how easily fellow frontcourt player Dedric Lawson operated against EMU.

The junior forward’s feel and passing against the Eagles’ half-court zone kept KU’s offense from turning stagnant, and often times led to easy baskets for Azubuike.

Lawson had 6 points and 4 assists by halftime and his role as a facilitator keyed KU’s easy start. The versatile big from Memphis put up 8 points, 5 assists and 4 rebounds as No. 5 KU improved to 11-1 on the season.

Freshman point guard Devon Dotson (15 points, 4 assists, 3 steals) quickly and efficiently put up 10 points in the first half, his most amazing contribution coming on an acrobatic fast-break layup. The 6-2 floor general also knocked in 4 of 5 free throws for easy points.

Dotson, like Lawson, spent much of the first half setting up teammates, with 4 assists before the break. Though it wasn’t a banner day for KU 3-point shooters, Dotson chipped in there, as well, with a corner 3-pointer early in the second half, when KU’s offense was in a bit of a lull.

It was another mostly quiet offensive outing for freshman guard Quentin Grimes until late in the game. And he didn’t stand out for piling up mistakes, either, which is a good sign.

Grimes looked confident in attempting his 3-pointers, even if he didn’t hoist a ton of them, making 2 of 4. He finished with 16 points in 29 minutes.

The at times erratic Lagerald Vick didn’t take on a starring role as he has at other points of the nonconference schedule. The senior guard from Memphis only put up 4 points on 2-for-7 shooting and went 0 for 5 on 3-pointers.

KU didn’t need much production from its bench on this afternoon, so it didn’t hurt the home team that it didn’t get much until the game was basically over in the final minutes.

Mitch Lightfoot provided 4 points and 6 rebounds off the bench. Charlie Moore (6 points) knocked down a timely 3-pointer in the first half. David McCormack (4 points) put in an early dunk for a 20-9 KU lead, and converted another in transition late off a Grimes lob.

As expected, Marcus Garrett was the best off the bench overall, contributing his typically solid defense, as well as 4 rebounds and 3 assists.

Why does it always take so long to get a box score at LJW????

Whatever the reason...it needs to be improved.

With Tony’s permission, here are my random thoughts.

1) Turnovers. On average I believe we are turning the ball over less than our competition, but 17 seems like a lot.

2) 3 point shooting. 7 for 21 is way better than the ASU game but we were 4 for 17 with just under two minutes to play when the game was over, and that’s not that great. Perimeter shooting is important to an offensive strategy but it seems like we are shooting a bit too much from behind the arc. LV was great early on but he has not been the same since he came off the bench against Wofford. Go figure, with all teams to mess with Legerald’s head it was the lowly Terriers.

3) Lightfoot takes the charge with a minute to go with a 20+ lead. Damn!

4) Why are the Eastern Michigan Eagles not called the Emu’s? Eagle is such a common mascot like Wildcat or Tiger. Emu is unique and trust me, you don’t want to mess with one. But if you decide to have one for dinner, they’re not bad.