Though not KU's starting QB, Miles Kendrick will play 'in every game' 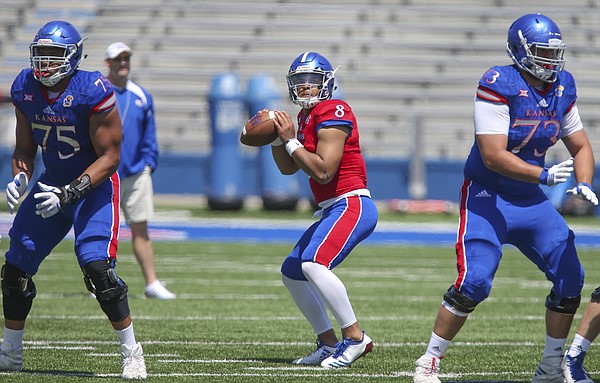 But his head coach foresees the sophomore dual threat QB who joined the program as a transfer in the spring factoring into the Jayhawks’ offensive game plan immediately.

It is clear David Beaty, who a week ago named Peyton Bender KU’s No. 1 QB for the season opener, and offensive coordinator Doug Meacham didn’t think Kendrick possessed the right combination of attributes at this stage of his career to supplant Bender, a senior who started eight games in 2017. That doesn’t mean they have completely discounted Kendrick, either.

While discussing the team’s three quarterbacks Monday night on the first installment of his weekly Hawk Talk radio show, Beaty didn’t only speak highly of Kendrick, listed alongside junior Carter Stanley as a potential No. 2 QB on the team’s first published depth chart. KU’s fourth-year head coach actually went out of his way to tell anyone who was listening that the 5-foot-10, 200-pound QB from College of San Mateo will get on the field this Saturday against Nicholls State (6 p.m., Kansas David Booth Memorial Stadium) and beyond.

While the coach didn’t get into the specifics of those statements — he should be able to elaborate Tuesday at his weekly press conference — it seems most likely KU will have some packages or plays specifically designed for Kendrick.

This doesn’t mean he and Bender will swap roles every other possession or anything of that nature, the way Beaty did a couple years back with Montell Cozart and Ryan Willis.

There just may be some calls or situations in which the Jayhawks can throw a modified attack at a defense with the mobile Kendrick taking the snaps.

“He’s got some things about him that really bring a new type of, a new twist to our offense,” Beaty said, “which I think is gonna be really good. We really like the kid. One of the hardest workers I’ve ever had.”

KU’s coaches liked Kendrick’s potential enough that they gave him every chance during preseason camp to win the starting job before Bender prevailed.

“He got a bunch of reps for us early on,” Beaty said of the initial August practice plan for Kendrick. “We had to find out. We had to know, right? So he took a lot of reps with the first team early on.”

Apparently Meacham and Beaty saw enough out of Kendrick through those reps to start figuring out ways that he could help the offense every Saturday.

“And what we found out was that we got us a good one there,” Beaty said. “There’s no doubt about it.”

Beaty explained the sophomore “needs a little bit more time” to become a complete QB. It just so happens Kendrick will get in-game opportunities as he continues working toward that goal.

Not exactly a Belldozer but it would seem like those inside the 10 yard line series would be likely candidates. Situations where the passing options shrink and his legs could add a bit of diversity to the offense.

I'd rather have Ryan Willis than Peyton at starting QB, who btw is not even the 2nd team qb at virginia tech.

Can't wait to see Miles on the field.

Why not just start him then...

Kendrick got my vote from a fan's perspective on starting, but I and everyone else who is and was high on Kendrick have the YOOOGE disadvantage of not being in practice to watch the kid. I think there's many good reasons to get an inexperienced kid in the mix early to get experience (at the D1 level), but on the other side of the coin, we're paying a head coach to make those decisions. If Beaty is right about Bender, we'll see it on the field. On the other hand, if he's made the wrong decision in not starting Kendrick, then Beaty will lose games and he'll be fired. Either way, the problem will correct itself.

I think the offensive line will hold the key to who eventually will start behind center. If they are able to give the qb time to find the open receiver then Bender who is more of a pocket passer could be the guy. But if they find too many leaks that require someone who is more fleet of foot, then Stanley or Kendrick could get the nod out of necessity.

I can see that Bender will complete a couple of short passes, run the ball, just as the team gets in a rhythm moving the ball, he'll switch the QBs and a three and out will occur. Personally, I would like to see if Kendrick has a year to red-shirt to do it, not because I don't think he is good, but likely one of two things will happen. KU will be amazing under Beaty and he'll have next year to really drive the team, or KU will operate like it has the past few years and next year he'll have a different coach to help develop him.

I know you bring him in to compete and win now, but when Zenger didn't fire Beaty last year, it set up a dismal forecast for this year.