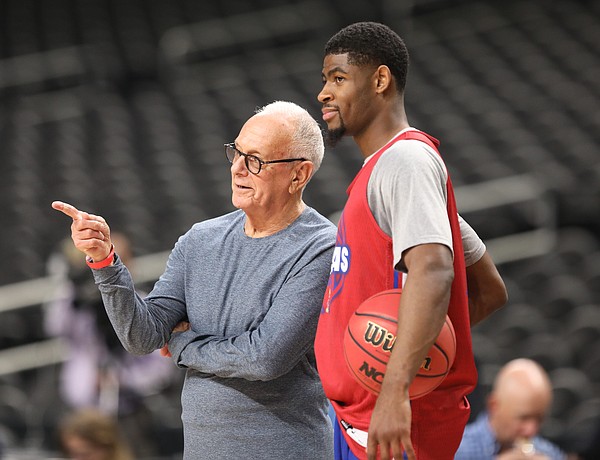 Two years as a retiree hasn’t kept the former coaching nomad from spending time around the game, though. Brown arrived in San Antonio this past week with the Kansas contingent at the Final Four, three decades removed from winning it all with the Jayhawks.

Now that leading a team is no longer his job, Brown explained what he misses about his former life.

“I don’t like games. I like being around the coaches and teaching the kids,” he told a group of reporters on the eve of the national semifinals. “And I get a little frustrated, because I don’t think a lot of kids are getting taught. They’re leaving too early. They’re thinking they’re in the NBA before they play a college game. A lot of them think they’re failures if they don’t make it, and that troubles me.”

The compositions of the teams that advanced out of their regionals and made it to the Alamodome, though, offered Brown encouragement on that front. Although one-and-done talents such as Duke’s Jahlil Okafor, Kentucky’s Anthony Davis and Syracuse’s Carmelo Anthony have helped lead their teams to six NCAA Tournament wins and a national title in the past, this March’s Final Four field lacked one such freshman star.

Seniors Devonte’ Graham and Svi Mykhailiuk, as well as junior Lagerald Vick and Malik Newman, in his third season with a college program, were instrumental in getting KU to San Antonio. The same was true of Loyola seniors Ben Richardson, Donte Ingram, and Aundre Jackson, plus junior Clayton Custer. Senior Muhammad-Ali Abdur-Rahkman and juniors Moe Wagner and Charles Matthews propelled Michigan to the Final Four, as did Villanova juniors Jalen Brunson, Mikal Bridges, Eric Paschall and Phil Booth. 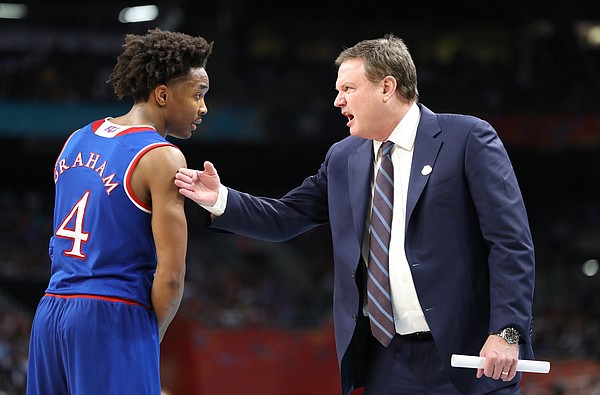 Kansas head coach Bill Self and Kansas guard Devonte' Graham (4) have a talk on the sidelines during a break in action in the second half, Saturday, March 31, 2018 at the Alamodome in San Antonio, Texas. by Nick Krug

“It seems to me the longer they stay, the better they are and the more chance they’ll have to graduate and make something of their lives,” Brown said, while praising KU’s Bill Self, Loyola’s Porter Moser, Michigan’s John Beilein and Villanova’s Jay Wright for being coaches who go about their business “the right way.”

From Brown’s perspective, college basketball provides players with “an unbelievable opportunity” to receive an education and “make their lives better,” while crafting their skills in the hope of extending their basketball experience to the professional ranks.

However, Brown isn’t against allowing high school players to skip college completely and enter the NBA Draft — a system the league went away from in 2006, leading to college basketball’s current era of one-and-dones.

“Golfer, tennis player, musician, you can come out if you have a gift,” Brown offered, in regards to other young adults turning their skills into jobs without ever attending a university.

Here’s the catch. Brown would be in favor of keeping those players who go to college with a program for multiple years, instead of giving them the option to declare for the draft after as little as one year of education.

“If they go to school, I’d like to see them stay as long as possible,” he said.

A similar structure is in place for the MLB draft. A player can declare out of high school. But once a baseball player joins a college program, he can’t turn pro until completing his third year. In the NFL, a player has to be three years removed form high school graduation to turn pro.

The longtime coach, who has observed from both sides of the spectrum, called college basketball “the greatest minor-league system in the world.” Brown conjectured struggling young NBA players who leave college after one year weren’t ready to become professionals when they declared.

“And a lot of them, they have developmental coaches,” Brown said. “We need teachers.”

The man who owns both an NCAA and NBA championship ring said this year’s Final Four featured four “great teachers.”