Josh Jackson should have more impactful postseason than Andrew Wiggins did 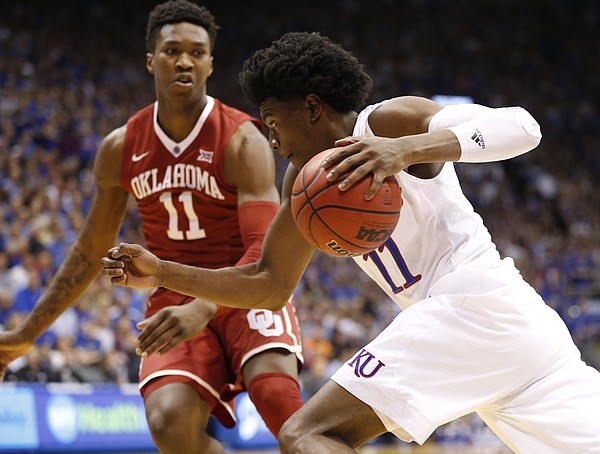 In 2014, one-and-done Kansas star Andrew Wiggins became the No. 1 pick in the draft after leading the Jayhawks in scoring. Yet, as this year’s KU team prepares to begin its postseason run, one gets the sense Kansas expects even more out of its latest NBA-bound freshman wing, Josh Jackson.

Three years ago, coach Bill Self needed Wiggins to score, draw fouls (he got to the free-throw line 227 times during his one year of college basketball), help the Jayhawks on the glass and use his athleticism and wingspan to defend all over the floor.

Self requires all of that and then some from the 6-foot-8 Jackson, who is a far more polished driver and passer for KU than Wiggins was before turning pro.

Wiggins definitely did a better job of staying out of trouble off the court during his brief stay in Lawrence. Jackson will serve a one-game suspension for KU’s Big 12 tournament opener on Thursday after backing into a parked car last month and failing to leave proper contact information. This display of poor judgment came in the same month Jackson was charged with criminally damaging a car in a separate incident.

Self has to be perturbed by Jackson’s actions, which led the coach to keep him out of the lineup for a postseason game. Fortunately for Self and the No. 1-ranked Jayhawks (28-3), Jackson has looked far more shrewd on the court and even has overcome a tendency earlier this season to draw a technical foul here or there.

Speaking with media members on Monday, prior to news of Jackson’s suspension, Self cited his star freshman’s mental approach to basketball as a reason the explosive wing from Detroit has been able to set himself apart from past one-and-done prospects who passed through KU.

“In crucial situations, he’s got a calmness about him,” Self said of the 20-year-old Jackson. “I think that his intangible makeup is as good as any that I’ve ever been around, especially at that age.”

Wiggins was definitely the better athlete — which is saying something when you’re being compared to Jackson — but Self might trust Jackson as a player more than any freshman he has ever coached. 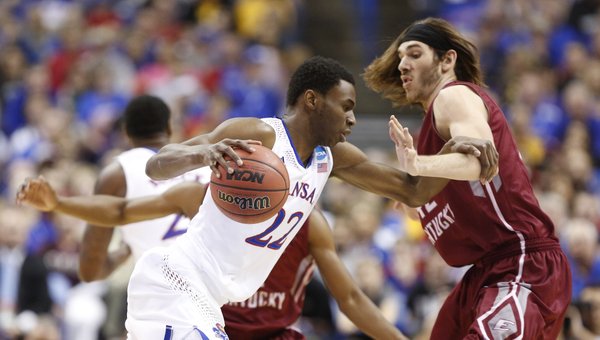 Jackson and Wiggins arrived at Kansas in very different situations. Jackson gets to play in a four-guard lineup with all-league veterans Frank Mason III and Devonte’ Graham. The most experienced guard Wiggins played alongside was Naadir Tharpe. Still, it’s difficult to envision Jackson’s college season — and career — ending with a 4-point outing in a loss, which turned out to be the case for Wiggins.

Jackson seems too competitive — and maybe it’s easier to be that way when you’re rolling with a national player of the year candidate like Mason — to not find multiple ways to impact the game every time he steps on the floor.

The freshman from Detroit has overcome the pressure of arriving at Kansas with the expectations of a rabid fan base hovering over him, too. Self said earlier this season playing under some duress might have led to some early struggles, such as 3-point shooting. A 37.7-percent 3-point shooter on the season, Jackson has knocked down 12 of 25 (48 percent) from deep since the end of January.

“But, you look at it, he’s been pretty consistently good in defense, rebounding, extra possessions, energy, making plays for others, passing,” Self said. “And you know he’s been a consistent scorer.”

Those skills and Jackson’s personality make him look like a far more dangerous player, capable of improving KU’s postseason chances, than Wiggins was three years before him.

The Canadian sensation came through with scoring outputs of 30, 22 and 19 points in the 2014 postseason prior to KU’s loss to Stanford in the first weekend. Jackson is so versatile he could put up big points like Wiggins or not and still give the Jayhawks a chance to win by doing the other things he’s shown all season.

Jackson might not end up being the No. 1 overall pick in the NBA Draft, but he seems to have the kind of mental makeup and array of skills to do more for Kansas this postseason than Wiggins could in 2014.

Below is a look at the regular-season statistical output from both Wiggins and Jackson, prior to the start of the Big 12 tournament.

I hope Jackson steps up come tourney time. Wiggins just didn't come through when we needed him the most - I remember him not making shots, the pressure must have gotten to him.

It's hard to be too critical of Wiggins. Embiid got hurt and was out. In that Stanford game the Traylor and Ellis were awful. The team went 4-16 at the rim. Tharpe was our PG and most experienced guy. That team lost double digit games and was one of the worst teams Self ever had. Wiggins kept our Big 12 win streak going, which certainly would have ended without him. But yes, Wiggins checked out for that Stanford game. The Kansas memory Wiggin's leaves is the incredible last second tip-in to beat TTU in Lubbock but is offset by all those missed bunnies and lack of effort vs Stanford.

The 40 points against WVU were nice too. If only they had resulted in a W.

You are correct sir. He has the most impactfull rap sheet of any player in a Power 5 conference